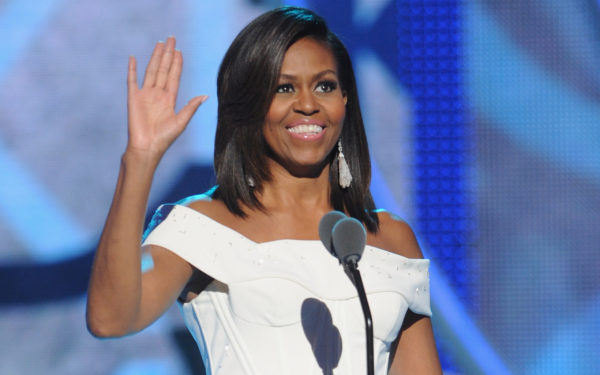 In light of the election results, I find myself disgusted, but not shocked. After the exit poll statistics were released, the group getting the most side eye on the internet today is white women, with a whopping 53% of them supporting Trump, and that number skyrockets to 62% among white women without a college degree. Again, I’m not surprised. This is basically the epitome of “white feminism,” and time and time again we see white women choosing race over gender and empathy for others. Miss me with the argument of internalized misogyny and “Stockholm Syndrome” — white women knew what they were doing.

And with that harsh reality, people on the internet are practically begging Michelle Obama to run for office in 2020, a call that has gotten louder and louder since her speech at the Democratic Convention. But Michelle isn’t having it ‑President Obama explicitly stated on Sway in the Morning that she will “never run for office,” stating,

“She is as talented and brilliant a person as there is, and I could not be prouder of her, but Michelle does not have the patience or the inclination to actually be a candidate herself. And that’s one thing y’all can take to the bank.”

Still, people continue to plead. It’s kind of similar to a small child asking their mother for a new toy and repeatedly being told no, but it doesn’t register. Well, Michelle, I hear you. I don’t want her to run, although I think she would make a brilliant politician. For the past eight years, Michelle Obama has been subjected to a plethora of racist and sexist attacks. Just a couple of days ago, the New York Times Style Twitter account received massive backlash after applying the “angry black woman” stereotype to the First Lady. And unfortunately, that was tame compared to the abuse she’s fallen victim to over the years.

The level of selfishness in asking Michelle Obama to sacrifice her well being further for “the greater good,” is astonishing. She clearly is doing work to improve communities across the world, leading Let Girls Learn, Reach Higher, Joining Forces, and Let’s Move!, and will continue to be involved in initiatives that support her core values once President Obama leaves office. This type of work, while different than politics, is valuable and needed in this country. She already showed up. And yet, America is asking a black woman to put herself aside to attempt to bail them out of the mess we’re currently in.

Black women were highly active in the suffrage movement, yet rarely receive credit. On election day, hundreds decorated Susan B. Anthony’s grave with their “I voted” stickers, yet no one mentioned Sojourner Truth. Anthony blatantly did not see black women as equal to her, stating,“I will cut off this right arm of mine before I will ever work or demand the ballot for the Negro and not the woman.” And yet, black women strongly supported the movement, joining the American Equal Rights Association, National Woman Suffrage Association, and the American Woman Suffrage Association. Those women showed up.

Whether we wanted to or not, we came to the polls and voted for Hillary Clinton. 93% of black women voted for her — NINETY THREE. WE showed up.

If you love Michelle Obama so much, respect her wishes and her time. Don’t demand that she do something that she clearly doesn’t want to do because you feel it would be in your best interest when it’s not in hers. Let her live her life and support society in her own way. There will most likely never be another First Lady like Michelle Obama, and her legacy will not go unnoticed, political run or not.

When I first started reading this blog, it was all about hair and beauty. Why is every other article about race? Can we please get back to where it used to be, to honor the title of the blog? Hair?

there are still hair and beauty articles. Why are you choosing to open up articles about race and culture? If you don’t like them, don’t click.

That still doesn’t answer the question of why nearly every “article” is a race-baiting one and the title is still Black Girl with Long Hair. Oh well.

…this article is centered around race. It’s about BLACK hair and BLACK beauty and encouraging WOMEN OF COLOR. Your argument and plea is invalid.

So the purpose of the site and the articles contained herein is the encouragement of WOMEN OF COLOR and yet you tell another black woman her argument is invalid, simply because you disagree with her? Tough to reconcile the two but, ok…

It’s her decision to run or not, let’s not force her.

People are just grabbing at straws to undo their screw ups. Instead they should be prepping for 2020 by finding someone who WANTS to run that isn’t an idiot.

no , no , no ‚no I don’t this lady has endured enough, these white feminist and white women are absolutely bigots they destroyed our communities many times over, in the form of lies and dishonesty, all a white woman has to say is a black person usually male did so and so to her and they would fire bomb our homes and harass our men. I plan on being extra petty and every month a new photo is going up of melania trump our new hoetus because she ain’t no lady, all her nude photos will be displayed continuously… Read more »

She was the best first lady ev
Reply to  laolamvaed

I agree. Black women need to realize that the white woman is our enemy historically. She has repeatedly chosen race over standing with fellow women of color.
I wouldn’t want Michelle to run for president either. They would eat her for breakfast. Far from being these delicate little creatures the world like to lie about white women being, they are silent, vile, conniving and cunning racist creatures that black women must NEVER trust.

Suave mi amor. They do use Black men as pawns, but White men have Asian women to bust their balls now. So it ends well.

Yes and black men as usual are the last ones to see that white women use them as pawns. Look when that black candidate Herman Cain ran, look how white women were so quick to throw him under the bus with accusations of affairs, sexual harrassment etc. Yet Donald Trump had triple the complaints and he still won. White women will forgive white men anything, yet black men think white women have their backs. Its hilarious. White women will always overlook racism to vote for sexist racist white men at the expense of women of color. And yes, white men will… Read more »

My point is that it’s racial chess. WM and WW are the King and Queen. Black men are the Black Knights and Asian Women are the Rookies. Don’t be a pawn. Learn to play the game.

Trump won because Hillary and the DNC took the Blue Wall (the Black Wall) for granted. Trump did not receive any extra votes from white women! He received relatively the same votes that Romney and McCain garnered. Black Americans in Detroit, Milwaukee, Philly, and Charlotte — apparently had nothing to lose — and did not show up at the polls. They were not courted by the Dems. The Dems only have Dems to blame for this tragedy.

Not true. White women’s support was higher for Trump than Romney and McCain.

@Janet Perhaps, but if the DNC held the Blue Wall (Electoral votes) Clinton would the President Elect. His victory had nothing to do with white women — even though they want to take/accept credit and blame! Good for them. They overlooked every political, social, civil, sexist, mysogynistic, racist, and xenophobic act of violence to preserve what?

The Democratic Party put up an awful candidate, plain and simple. The party fixed the primary to get Hilary as the nominee, and the party got exactly what it deserved in the Presidential Election.

I voted for Bernie Sanders in the primary because strategically, I thought he would be the best candidate. Unfortunately he did not win. But the problem with your response, even if you think Hillary Clinton was awful, Donald Trump is so much worse and one of them was going to be president. You say the party got what they deserved but what about all the people that will suffer under this presidency. Though Hillary Clinton wasn’t a perfect candidate, she was someone that would be reasonable. Trump has acted like a racist lunatic throughout the campaign. No, voters needed to… Read more »

I actually jumped on the Anthony “I voted” posts and asked if anyone was going to Sojourner Trurth’s grave because I wanted picture of that. No one answered..

Great article Elle and I agree with you on every point. Michelle Obama has been the best first lady of my lifetime (and my lifetime is a lot longer than many of you on this post, lol). She has done her part and needs to be left alone. I wish President Obama, Mrs. Obama and their daughters a wonderful life. They have given 8 long, hard years of service. If they want to be out of public life, we should all respect that!

Please, not that whiny, hateful dope. Put her on the space station instead.