A popular narrative concerning black women is that we don’t support each other and constantly stoke drama for the sake of it. But for many black women, the love and support of girlfriends are what get us through life. That is also true of black women in entertainment, who have the unique privilege and challenge of working in an industry that is notoriously difficult for women of color.

While it’s common for celebrities to milk friendships as a source of publicity, these black woman celebs hold each other down both in front of and behind the camera, and we are so inspired by their bonds.

This right here… is girlfriend goals for real. Williams, formerly of The Daily Show and currently of the 2 Dope Queens podcast, and OITNB’s Danielle Brooks dressed up as Mickey and Nisi from the 90s comedy B.A.P.S and basically won Halloween.

And a few weeks earlier they toasted it up to celebrate Brooks’ birthday.

They both recently appeared in Lane Bryant’s groundbreaking new campaign, but their friendship pre-dates that. We love how silly these talented beauties are when they get together.

These girls just ooze black girl magic, carefree-ness and all things delightful. The teens (Shahidi stars on Black-ish, Chloe x Halle are Beyonce’s proteges) recently spent Halloween together and it is so much cute.

When they’re not kicking it together, they’re tweeting love for each other back and forth.

Proving that ridiculously good-looking women CAN be friends, DaCosta shared this laid back, makeupless selfie with then-pregnant bestie Sumpter. We love it!

These uberly talented indie songbirds have been friends for a minute now. The Knowles clan is notoriously tight-knit and known for treating close friends like family, so it wasn’t surprising when Monae made a cameo in Solange’s wedding shoot that broke the internet. Monae is second from left. 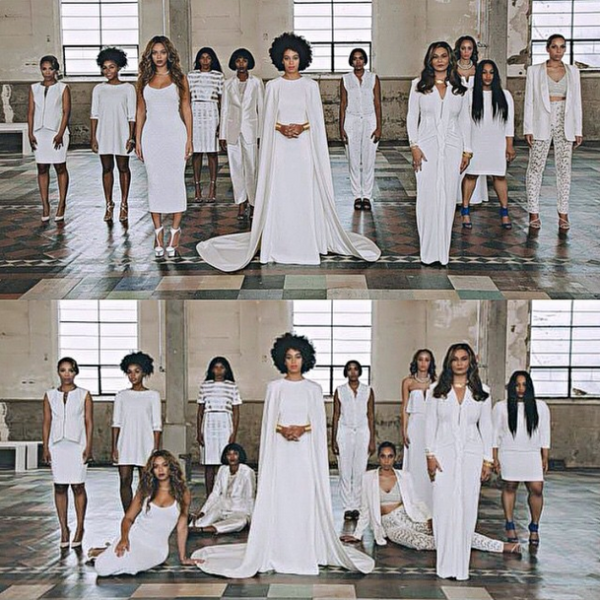 Thompson and Monae defined friendship goals when they took a girl’s getaway to Mexico last year. According to TheYBF, Monae surprised Tessa at the premiere of her movie Creed after which the ladies jetted to Mexico with a group of girlfriends. It looks magical and we really wish we were there!

Ross is known for being vocally supportive of other black woman actresses. But we were surprised to learn that she and Gabrielle Union share a special bond — they were born on the exact same day; October 29 1972. The ageless beauties often use the opportunity to celebrate each other. Ross recently gave Union a shout out, declaring their birthday a “national holiday.”

We were soooo hype when we spotted this Instagram post of our faves, actress Yvonne Orji (of Issa Rae’s Insecure), Aja Naomi King (of HTGAWM and Birth of a Nation) and Teen Vogue editor Elaine Welteroth (the first black woman to hold the position). Apparently the friendship is brand new. After meeting for the first time, the women clicked immediately and ended up spending an entire day together. Orji described the epic day on Instagram;

“When @kingofbingo connects three women from the other side of the country, an all-day love fest ensues; from brunch with @elainewelteroth (editor-in-chief of Teen Vogue), to her having a spa day with @ajanaomi_king (HTGAWM & Birth of a Nation) to all of us going to see #Moonlight & having a 3 hour debrief about the movie over desert and celebrating Aja’s @elleusa cover. It was love at first hug!! Can’t wait to see what beautiful things blossom from this union!
#CoolPeoplesDoingCoolThingsTogether
#BlackGirlMagic
#inFullEffect
#ByOurPowersCombined”

We are here for seeing how this friendship develops!

All of these women are the definition of squad goals and we absolutely love it!

This is so cute

The narrative is bs, we do support each other because no one else does

I don’t think this is about not supporting each other, it’s more like they didn’t know that these celebrities were friends.

Beautiful! I wish Tracee was my bff!