Black Women Are Tagging and Outing Their Abusers on Social Media

Social media is a tool for a lot of things in 2016 — alleviating boredom, sharing breaking news, posting silly memes. But now, more women are taking to social media for a different purpose — telling their stories of domestic abuse, and often calling out their abusers. Many times, they even directly “@” the abuser to reveal them to their followers.

There are several reasons behind sharing these stories — some do it to ensure other women are warned about the man, for their own personal form of therapy, to encourage other women to come forward, and to spread awareness and call out the law for dismissing their cases.

Recently, Twitter user @YeNani_ wrote a thread detailing the alleged abuse she faced for a year from her ex-boyfriend in order to let people know his true colors:

*Note, this thread may be triggering for some and all content is owned by @YeNani_* 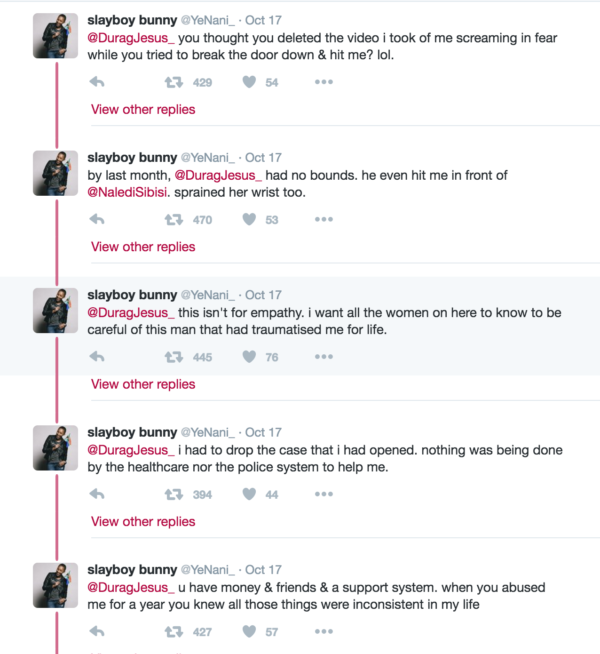 She continues in her series of tweets further detailing the abuse, specifically stating multiple instances in which her ex-boyfriend struck her, and how he manipulated her into staying in the relationship. The entire thread is heartbreaking, and many users have reached out to her for support and thank her for sharing her story. However, she explicitly states that bringing the information to light is the most important.

This isn’t the first time a woman has used social media to make her abuse and abuser known. A few weeks ago, a woman posted pictures of her wounds and recovery after her boyfriend stabbed her multiple times, as well as posting his arrest report. October is also Domestic Violence Awareness, and women are telling stories or sharing pictures to promote further awareness.

Often, these stories bring about a bigger discussion of domestic abuse, misogyny, and toxic masculinity. What’s horrifying is that a lot of men use these opportunities to justify putting their hands on a woman.

I hate when this topic comes up and I see how many of the men on my TL justify hitting a woman.

To be clear, hitting another person that you are in a relationship with, man or woman, is never okay. We hope that women continue to share their stories and are met with messages of love, acceptance, and hope.

If you or someone you know is experiencing domestic violence, call the National Domestic Violence Hotline at 1–800-799-SAFE (7233).