Saturday’s Tidal concert had a lot of folks talking. From Nicki Minaj’s backstage and on stage twerking, to Beyonce not missing a beat after getting a bloody ear from a wardrobe malfunction. A less obvious, but equally interesting story involved Beyonce’s red carpet Tidal dress, which was designed to mimic the African tradition of scarification. 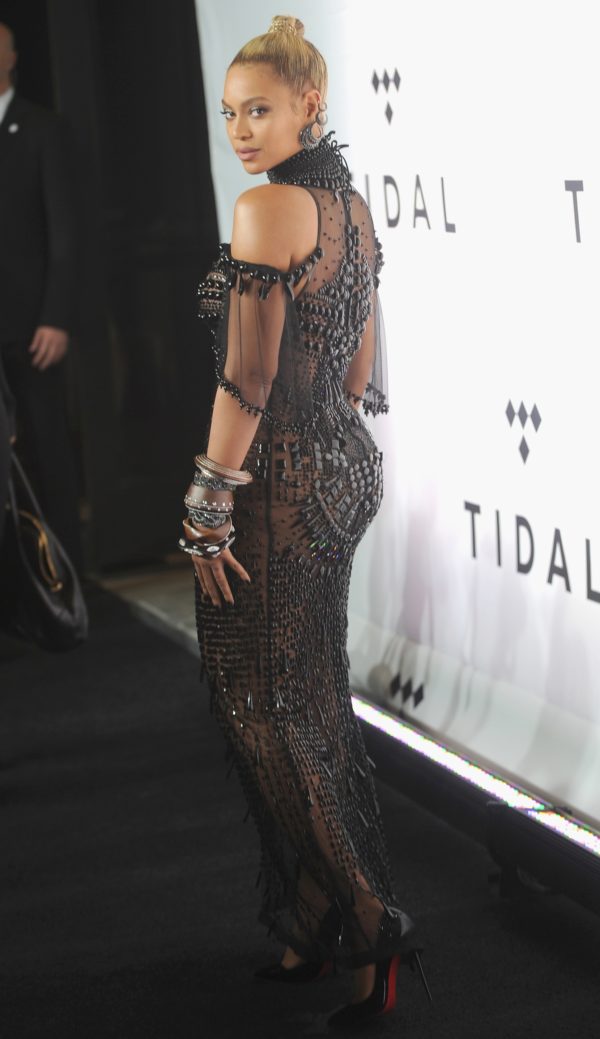 “The dress without the context of the inspiration is beautiful in and of itself. But when you get the backstory, you might appreciate it even more.

The pattern for the bead work came from this picture of an African woman’s back, which had been intricately and artistically scarred. 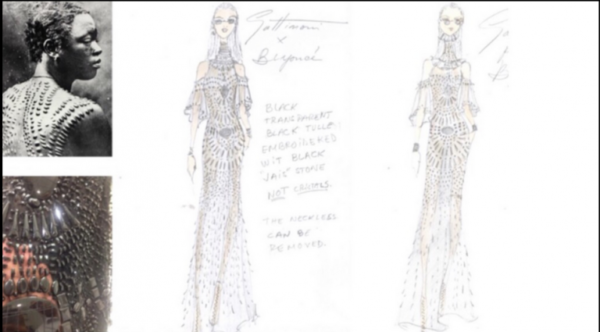 The picture below was posted on Beyoncé.com and later on the Instagram page Beylite, where there is a bit of debate about the authenticity of the story, likely because they didn’t realize the image was on the singer’s official page. But if you look at the two images side by side, it’s hard to ignore the similarities.” 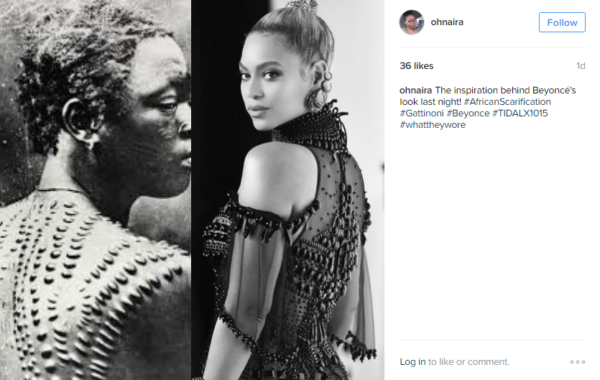 Beyonce has infused her music and visuals with African influences for several years now. She acknowledged Nigerian Afrobeat artist Fela Kuti as an inspiration for her album 4, and incorporated Mozambican dance heavily into the choreography for her hit single Run the World. And of course there is African imagery all up and through Lemonade, so it’s not surprising Bey would continue this theme.

Scarification is actually a fading practice in African culture due, in part, to the impact of modernization and urbanization. In 2014 Ivorian photographer Joana Choumali set out to document scarification.

“This practice is disappearing due to the pressure of religious and state authorities, urban practices and the introduction of clothing in tribes. In many villages, only the older people wear scarifications… I also had trouble finding people to photograph because of their rarity. This “last generation” of people bearing the imprint of the past on their faces, went from being the norm and having a high social value to being somewhat “excluded”. These last scarified are the last witnesses of an Africa of a bygone era.” 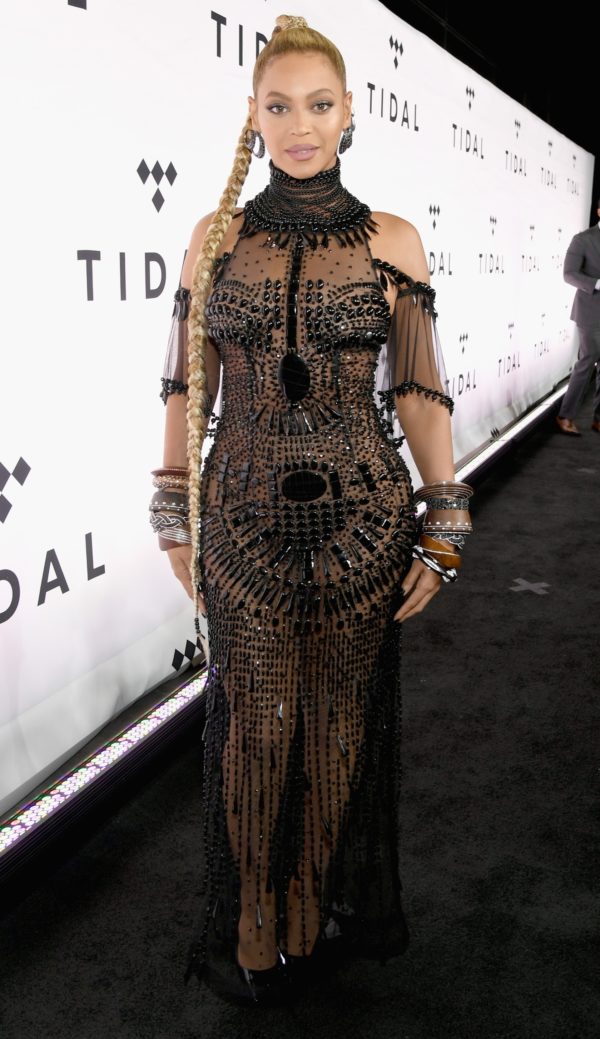 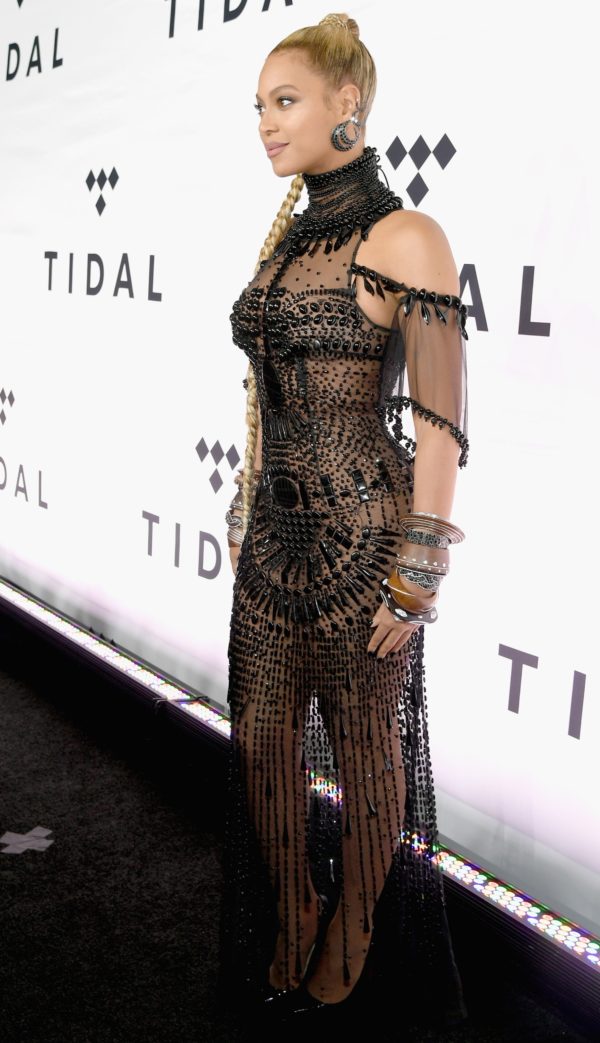 Appreciate her, but this is appropriation.

How sway????? FLATLINED!!! The internet is off its rails I tell you. What a time to be alive.

Exactly. The dress was inspired by of scarification. Who’d know any different if it wasn’t mentioned. Designers always have a basis for their work. I Studied fashion so I understand the process of taking something and reworking it into an idea for a design piece.

Hmmm, yeh.….hmmm.….What a shame Beyonce doesn’t extend her affiliation with black culture to wearing black hair (both colour AND texture). Now THAT would impress the socks off me, and I daresay a few others.

Because the full complexity of blackness is rooted in hair color. Girl, have a seat. Luckily for the world, the magnitude of Beyonce’s impact does not rely on your approval. Bye.

You seem to have missed the point. It’s not only about her hair colour. Compare her to say, her (less euro-centrically accepted) sister and you may just come close to getting it. Girl Bye.

And you seem pressed flatter than a panini. BYE, GIRL.

Are you one of those Yahoo comment trolls who stalks any/all articles about Beyonce, JUST to talk about her hair? If so, please go back to where you came from. It’s getting old.
k.thanx.bye.

Actually I’m just one of many black women who don’t worship Beyonce, and has an opinion that disagrees with yours! If you haven’t noticed the increasing ‘whiteyfication’ of this ‘black’ woman, to appeal to a white majority, then YOU’RE the troll.

Wow… I’ve never seen it that way. Thanks x

Tell that to Europeans. They’ve been taking ish for centuries and this really isn’t about appropriation, it’s about inspiration. There’s a massive difference.

Black people are African. There are no non-African black people.

you’re clearly a white person in disguise. How are you going to say that the Europeans who invaded your land (Afrikaans) are more African than black people with actual roots there? You are an impostor and you are trying to prevent black people from appreciating their roots.

Please educate yourself on Afrikaans history and specifically the history of south Africa. Through doing so you will find out that the relationship between the Khoi, San and the Boers was actually a beautiful one. The Boers even went on to defend the zulus in the 1st south African war and if you trace words in the language and traditions and customs a lot of it comes from the African cultures they had around them. The downside is what happened years after the harmony but even then that doesn’t make them less African than I. And being a non-white and… Read more »

Calling an Afrikaan an African is the most ridiculous thing I’ve ever heard. Africans are black not white.

From an african to a ‑supposedly- other african : No to that part about afrikaans.
And you aren’t about to compare african americans to afrikaans.

Oratilwe, Here’s the thing. Just a pseudo-friendly reminder… Most of your “non-African black siblings” of the world didn’t volunteer to leave their African cultures for chains, whips, and plantations. Instead some of their rival black African ancestors *chose* to trade/give/sell to Europeans and Arabs. As you are well aware, they were then literally stripped of their culture which included: language, religion, music, clothes, practices, and foods. As a result they created their own. Many of those creations are a mixture of the indigenous (of wherever they were located), their European/Arab captors, and certainly whatever was able to be maintained from their… Read more »

@Tenbee that was the most beautiful and eloquent comment that I have read in a long time. I agree with you whole-heartedly and appreciate that you responded like a queen!

Agreed. Though, as you can prob tell, the likes of Beyonce does annoy me too.

Black child of the Diaspora here — Nah, I totally agree with the OP. I definitely can see many younger Black peoples as desperately wanting a connection with the homeland, but aside from the fact you can trace your DNA/ancestry to some extent (yes, it will require some work), throwing any old print, hair style, facial decoration etc on and labeling it generically “African” is plain stupid and shows you have put little to NO effort to REALLY understand the continent you so desperately want to feel connected to. THAT is your own fault (I say, “you” meaning a person… Read more »

Some interesting points. By this logic though one couldn’t generalise cultures existing in the same country/area (think, …British culture — exists across the UK, Britain and Ireland. Each one having it’s own culture within that ‘umbrella’ term). Regarding Solange’s hairstyle get-up, would you also be offended by say modern day Africans, living in Africa, emulating ancient dress in the same way? & would they be less entitled (or more?). Finally, what about modern-day Africans bringing the movement of MOBO full circle by adopting Black American style rap & hip hop music styles into their music — and music video performances. Seen… Read more »

Inspired by (as opposed to mimic) may be more appropriate.

Why don’t you give that same lecture to Europeans because they are heavily inspired by African culture( umbrella term for anything associated with Africa and the people no matter the region they come from or their specific culture). Their trend books are filled with images of African art, dress, textiles you name it. I studied fashion and have always used some aspect of African culture as a basis for my work. I could use European culture to do this but I’m not European(not that it matters) and I don’t find their heritage that interesting. They have taken every aspect of… Read more »

I have trust me x. I’m just unwilling to not adress the issue on both sides. But yes, those are big problems but because they do it doesn’t mean that we should too. That’s never the way to work towards a better tomorrow but that’s just me, Queen

Whatever.…..If B hadn’t told you all the reference you wouldn’t have made the connection to your ”culture’.…It was a beautiful expression and interpretation. …by the way I saw daishikis in the dollar stores all summer.…are you gonna confront the Chinese about their appropriation. …or how about the European designers who ‘appropriate’ some aspects of African culture.…you gonna call them out too.…yeah.….didnt think so.……and what’s with you speaking for all Africans?.…who are you?.…..and was the photo referenced apart of YOUR culture.…..or can you speak for all African cultures?.

Dear non-African black siblings of the world We, your black African brothers and sisters, are TIRED of you appropriating, misinterpretating, and not taking enough time to actually learn about our “African culture” but still telling the world about it in effort to seem more in touch or more “woke”. We understand that you seek to be in touch with your roots but taking elements of any culture as a fashion statement or taking it out of context is appropriation and it is wrong. You taught us that. It is still wrong even of you’re appropriating a black culture and you are… Read more »