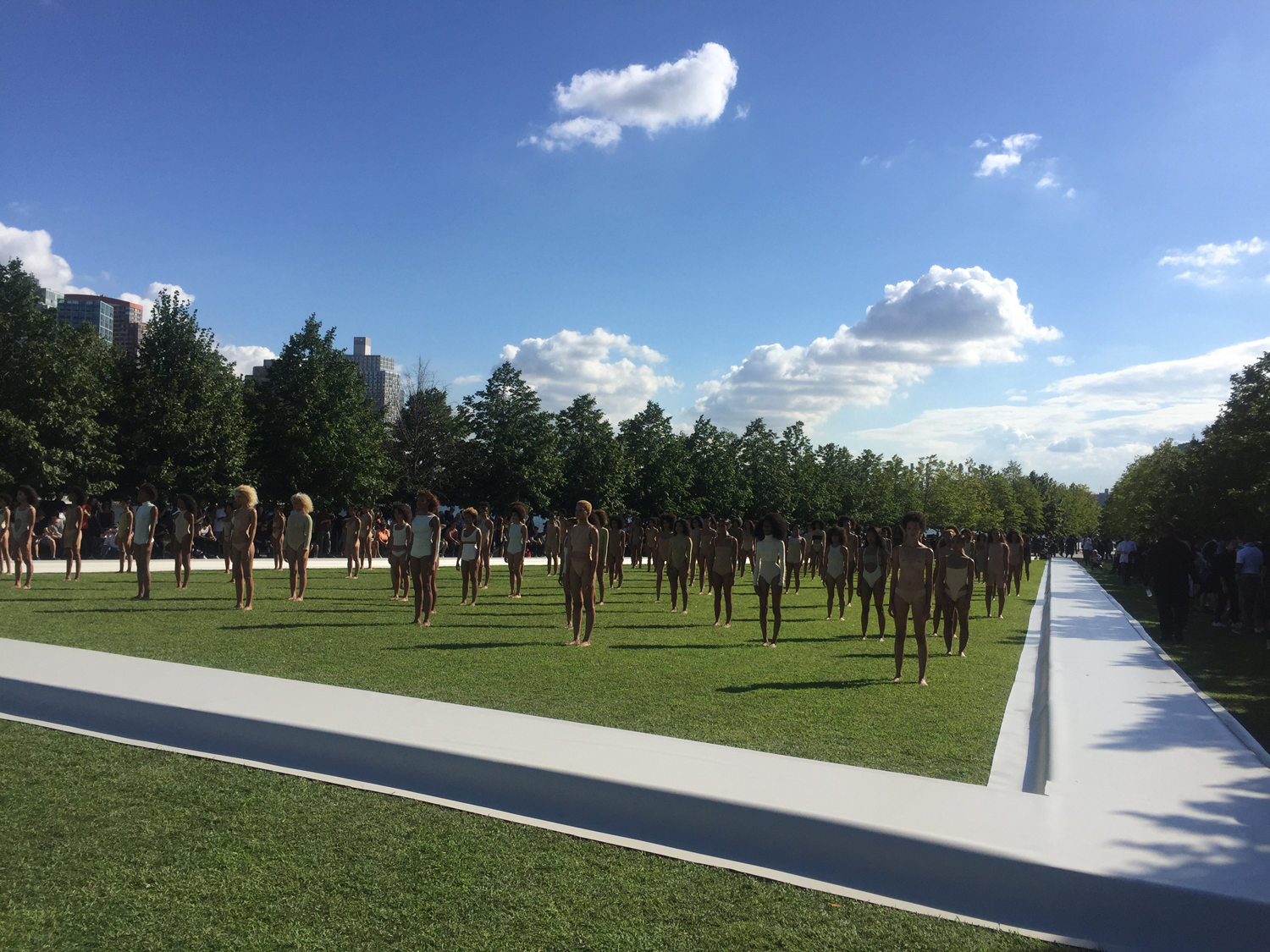 Today, fashion media has absolutely blasted Kanye West for the execution of his Yeezy Season 4 show, and with good reason — an inconvenient location at Franklin D. Roosevelt Four Freedoms Park, models standing long hours in 80+ degree weather, and his typical “non-fashion” fashion. Let’s not forget the uproar that happened as a result of his casting call asking for “multiracial women.” However, it’s impossible to ignore the inclusion that was displayed at the show, which Kanye worked on with Vanessa Beecroft.

The 500+ models were lined up according to what color of Yeezy clothing they wore, donning minimal face and body makeup, which is basically unheard of in the fashion industry.

Both Teyana Taylor and Chanel Iman also walked in the show.

I also appreciate how the models are all wearing their own hairstyles — whether short, long, natural, or straight — even bantu knots.

Unfortunately, these unique aspects of the show were overshadowed by uncomfortable weather conditions and long hours of standing in the hot sun without water for the models (some in winter clothing).

Model undone by the heat at Yeezy. pic.twitter.com/vaZlisrMdm

Amina Blue even removed her shoes during the show because she could barely walk in the sky high heels she was wearing.

Model Amina Blue struggles with the shoes at #YeezySeason4 pic.twitter.com/YfrSNUUOZf

It’s a shame that the show’s issues have become the main focus, rather than the models themselves, because they were absolutely gorgeous.

You can view the full stream of the Yeezy Season 4 show on Tidal, but you’ll need to log in.

most of the women were still multiracial though.

Yes I would say all were. Not sure how wrier’s define multiracial. All Black Americans who ancestors date back to slavery are multiracial.

I’m sorry, but that is some ugly crap! I admit the majority of stuff designers have at these shows are horrendous, but this is horrendous times ten!

Excuse me, but being multi racial doesn’t automatically mean that you are lightskinned or that your biological parents have different skin tones. It’s ignorant that y’all assume the term multiracial exclusively applies to “half white half black”. You could be a dark skinned person that posseses more than one race; and anyway, I dont believe that there is such thing as a person that is 100% a race nowadays. I’m assuming Kanye used that term in his very brief criteria so that he could incorporate a variety of cultures into his line. Chill and stop being racist, holla at me… Read more »

How is this racist?