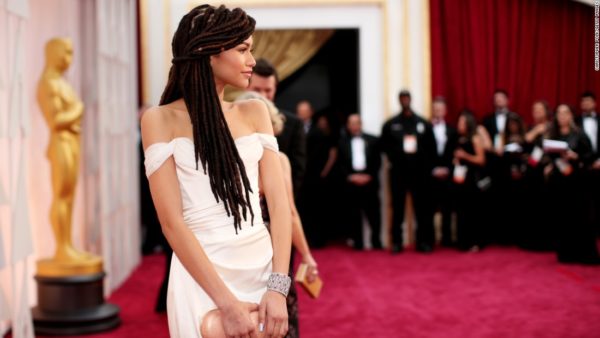 It has been “unofficially” confirmed that one of our favorite examples of #blackgirlmagic, Zendaya Coleman, will be playing Mary Jane Watson, Peter Parker’s love interest, the in the upcoming film “Spiderman: Homecoming.” According to The Wrap, the latest Spidey flick will focus on Peter Parker in high school, which makes her role make absolute sense. Although Sony and reps from Marvel and Zendaya declined to comment (it’s common for them to keep roles a secret and even use pseudonyms in scripts), the Twitterverse went nuts with the news because this is a major milestone in comic book to movie adaptations — this is the first time a black woman is playing Spider Man’s love interest (after a slew of lackluster castings, in my opinion).

Of course, some of the “nerd police” didn’t take too kindly to this news, stating that Mary Jane needs to be a redhead (her red hair is her staple). Good thing Zendaya’s fans were ready to have her back with a quickness: 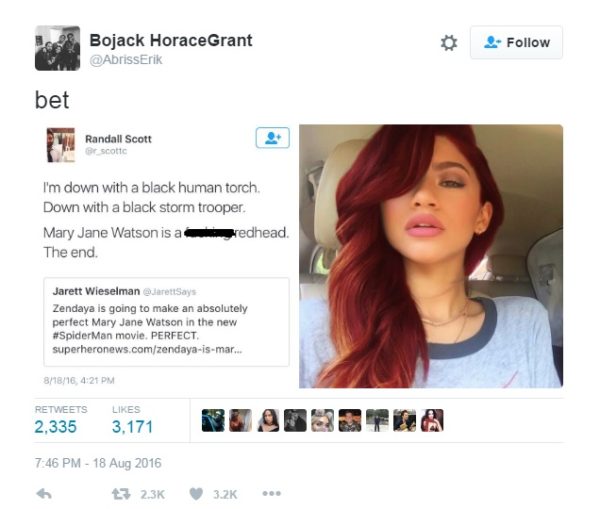 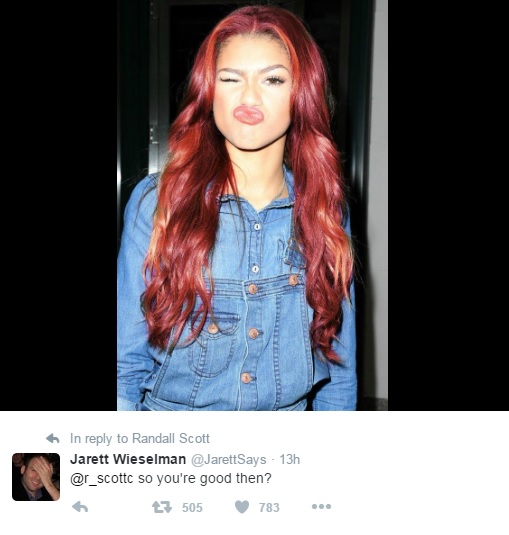 Looks like she was made for the role, right? All I know is that if she is appearing as Mary Jane Watson, I am most certainly going to see this new installment in the theaters.

I don’t understand why Zendaya gets so much attention and why everything that she does or that happens to her is presented as breaking barriers for the Black community. She is so bankable because of her light skin and European features. Her success reminds us that Hollywood still rejects dark skin and even caramel skin. Even though we can support her career, we shouldn’t be naive and recall that dark skin women are invisible on screen.

I mean at the end of the day…she can’t help how she was born. And she’s very supportive of the black community and she’s aware of the colorism that happens and has spoken on it.

Ain’t that the truth.

As a biracial woman, reading your comment made me cry a little as I’m just as Black as you.
You imply that Hollywood favours mixed over black, I disagree Zendata is successful because she works hard not just do to her Euro-centric features.

Come’on Now Loli Belle.. LOL Zendaya is were she is b/c of her features.. LOL I mean, DUH! She even admitted it. Please google it. Hollywood is trying to replace REAL black people w/mixed people.

I don’t see how you can say that when Zendaya herself has admitted her privilege. Yes, when a racist goes on a rant we’re all grouped together but colorism has been around since slavery and hasn’t gone anywhere in any community.

Bi-racial woman here. If you are a black/bi-racial woman with any understanding of history, you will have a very clear understanding that light skin in Hollywood is an advantage. I believe that most of us do understand this. Zendaya has already acknowledged this, and she has used her platform to bring issues to the attention of the mainstream media (that the black community is already very aware of) that may not normally have surfaced. Why does everything have to be an either-or situation? Acknowledging her accomplishments and appreciating the ways in which she has spoken out where others might have… Read more »

I’m not a huge Zendaya fan myself, I think the difference is, she claims that she wants to use her soapbox to make changes in the industry BUT she is still Actively Benefitting from her privilege. The same argument applies to the son in Two and a Half Men. He criticized the shows lush and seedy theme and deemed in damning and inappropriate as a Christian… but at the end of the day… he was STILL accepting checks from the same producers he claimed to condemn. Zendaya is doing the same thing. The proper thing to do, if you actually care… Read more »

What’s she supposed to do? Stop acting and go broke? Refuse the role of Mary Jane so that the studios — the ones in power who actually make the decisions about who HANDLES THE MIC — can give the role to a white woman once again? Are we really saying that it would be better if she stayed quiet?
Let’s all stop hating on the women who actually understand the issues and focus attention on the real problems.

Only If Zendaya is Mary Jane will I pay to see this.…why has there been 3 separate Spider-Man adaptations in my 25 year long life span? But all within the last 15 years?

As a non-American, Zendaya looks white to me, so I am really confused by this alleged outrage. I am also confused as to why this is celebrated as a huge achievement for black women. The girl is arguably lighter than Selena Gomez smh America really needs to stop with this one drop rule. I just cannot. I can’t.

The outrage is from racists that think it’s “reverse racism”. And she’s half black, that’s not a one drop rule.

No. It’s not hating. It’s logic. Once you speak out about something, and protest about something, you cannot partake in the same action without being hypocritical. What is she supposed to do, you ask? She’s supposed to make a decision lol. Stop contributing to the problem she so ardently complains about and suggest other actresses for roles or… YES stay quiet. I think I made my point pretty clear beforehand. The actor in Two and a Half Men decided that since he didn’t want to quit the show and give up all the money he’s made from participating in indecent content…he… Read more »

I’ve never seen her in anything so I can’t speak to her level of acting talent. I wish her well.

BTW, Anyone else have trouble getting on this site? The ads have been keeping me away. Was tired of dealing with them.