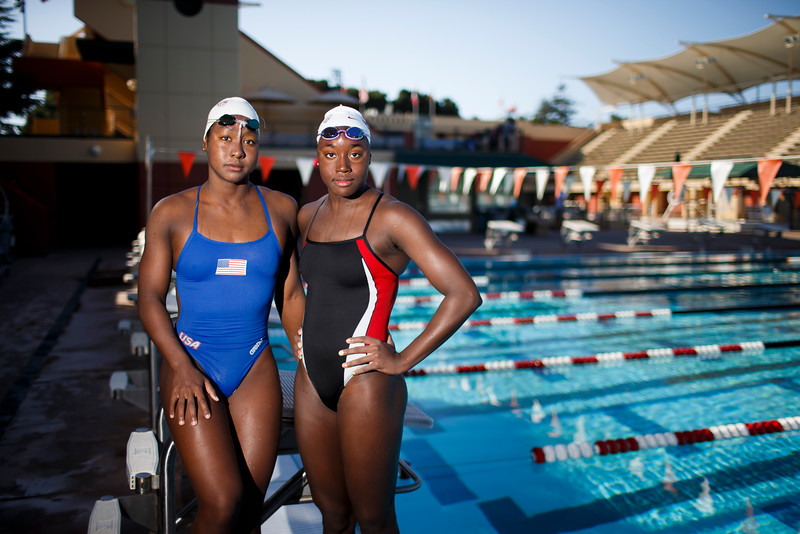 Stanford swimmers Lia Neal and Simone Manuel haven’t even competed at the Summer 2016 Olympics in Rio and they’re already making history. Early last week, the two women competed in the Olympic trials  and secured their place as contenders on the U.S. Olympic 4 X 100 freestyle team — the first time in history that two black women have been on the US swimming team.
Neal took home the bronze medal in the 2012 London Summer Olympics and Manuel is a two-time NCAA champion.


So here’s a little info on these incredible ladies; they are not just Olympic teammates, they are also close friends! Check out this adorable interview they did together:

Lia Neal is a 21-year-old Brooklyn, New York native while Manuel, 19, hails from Sugar Land, Texas. They both attend Stanford University where they compete on the swim team together. In 2015 they made history at the NCAA women’s swimming championships as two of three black women who ‘swept the podium’ for the 100 meter freestyle (Manuel finished first, breaking an American record in the process, Neal finished second.)

First tennis, then gymnastics, now swimming. It is really incredible to see black women dominating in American sports that have traditionally been very exclusionary to them.

Good luck ladies! We are in awe!

I was a grown woman the first time someone informed me that black folks don’t swim. Of course it was a white man…I had to let him know: I learned how to swim as a child and I still swim today as a (relatively) old lady. And I’m an African-AMERICAN, born and raised…Never mind black folks in this country: You gonna fix your mouth to tell me that all those black folks living in the Caribbean and on the African coasts don’t swim? GTFOH with that mess. Where did this notion come from? From the same folks who claimed that black skin… Read more »

I am soooo glad someone said something about this. I was like, “Am I the only one who heard that woman say ’ ”learning how to swim“ ‘????? Like???

I’ve also had that comment made to me by a European American, I’ve also heard it from other Europeans. They seem to think we are more suited to athletics and running. Well done to the girls, I’m pretty sure we have a brother from Britain competing too.

“The only thing that separates black people and white people is opportunity!” YES!!!

you should post something about nzingha prescod and Ibtihaj Muhammad who are on the u.s. fencing team.

lia neal is half asian, half black. So it’s a biracial and black girl, you racist mixed people hating writer.

You can be mixed and still identify as a Black person, you moron.

Anywho, congrats to both girls. We’ll be rooting for them at the Olympics.

yeah if you’re feeding into the white supremacist doctrine. If anyone’s a moron, it’s you. Not to mention you’re a racist, so your opinion means about as dog crap

yes and you can be white and identify as black but it doesn’t make you so.

Wonderful and hardest congrats.…make us all prouder, I know your parents are already.

[…] athletic accomplishments of young black women like Simone Manuel, like Lia Neal and Ashleigh Johnson (the first black woman to compete in water polo at the Olympics) are vital, […]

wow and one of them is from my hometown and I had no clue about this!!! I love that they are close! They will need each other for support! This is so wonderful to hear, god bless both of them and I wish them luck at the olympics. I was thinking of boycotting this year (the whole thing is a mess) but I will watch to support these two!!

2 girls who worked hard made the Olympic teAm!
Stop perpetuating race you racist bigots! I wish them well at the olympics and beyond! Quit trying to drag these girls into your own racism; rise above and stop perpetuating racism. Start making allegiances with people based on the content of their character and not the color of their skin.