Zoe Saldana has some choice words for critics of her role in the Nina Simone Biopic. Criticisms have been flying around since 2012 when it was first revealed that Salanda would be playing the legendary singer. When the movie trailer dropped a few months ago, the internet responded with collective outrage. Her acting abilities aside, Saldana’s use of dark makeup and a prosthetic nose in her portrayal of Simone was more than many of us could bear. Producers of the film, however, stand by their casting decision. “The most important thing,” said Robert Johnson, one of the producers of Nina, “is that creativity or quality of performance should never be judged on the basis of color, or ethnicity, or physical likeness.”   This rationale, of course, is absurd.  The producers clearly felt Simone’s story could not be told by someone who didn’t like her, which is why Saldana was forced to undergo hours of makeup to play the role. Her looks mattered. In an excerpt from her personal diaries, Simone herself once wrote,

I’m the kind of colored girl who looks like everything white people despise or have been taught to despise.

Therefore despite Johnson’s claims that looks don’t matter, we have to accept Saldana’s makeup and prosthetic nose as admission that “ethnicity“and “physical likeness” were important in the telling of this story. It then, of course, begs the question: Why not cast someone who looks like Nina Simone? 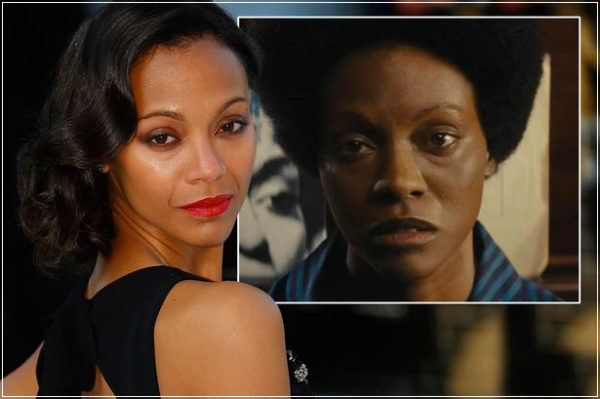 Ta-Nehisi Coates perhaps explained it best in his piece in The Atlantic:

We are being told that Nina Simone’s face bears no real import on the new eponymous movie about her life, starring Zoe Saldana…This is obviously false. Saldana could be the greatest thespian of her time, but no one would consider casting her as Marilyn Monroe. Indeed Nina’s producers have gone to great ends—tragicomic ends—to invoke Nina Simone’s face, darkening Saldana’s skin, adorning her with prosthetics…There is something deeply shameful in the fact that even today a young Nina Simone would have a hard time being cast in her own biopic.

Zoe Saldana, however, seems resolved to believe that her “blackness” is what’s being questioned. In the most recent issue of Allure magazine, she had this to say:

“There’s no one way to be black…“I’m black the way I know how to be. You have no idea who I am. I am black. I’m raising black men. Don’t you ever think you can look at me and address me with such disdain…I never saw her as unattractive. Nina looks like half my family…But if you think the [prosthetic] nose I wore was unattractive, then maybe you need to ask yourself, What do you consider beautiful? Do you consider a thinner nose beautiful, so the wider you get, the more insulted you become?”

Saldana even credits her acceptance of this role as the reason people now know who Simone is:

“The script probably would still be lying around, going from office to office, agency to agency, and nobody would have done it. Female stories aren’t relevant enough, especially a black female story…I made a choice…Whatever consequences this may bring about, my casting is nothing in comparison to the fact that this story must be told…The fact that we’re talking about her, that Nina Simone is trending? We fucking won..For so many years, nobody knew who the fuck she was.”

Saldana’s willful ignorance of how colorism was at play in the casting of this role adds insult to injury. An insult Nina Simone’s Estate manager, Aaron Overfield, chose not take lying down. He wrote:

Of course Zoe is free to define her own Blackness however she sees fit. She’s not free to make Nina’s Blackness about her, thereby marginalizing and minimizing Nina in the same way Nina was marginalized and minimized her entire life. And perhaps because — as she herself has stated in the past — Zoe chooses to be colorblind and to run away from discussions of race and ethnicity, Zoe is unable to distinguish the difference between some people claiming that she’s not “Black enough” from others of us that are saying: NINA’S BLACKNESS MATTERS. There is such a world of difference between those two perspectives that it might make one wonder why someone incapable of differentiating the two would be involved in making a Nina Simone biopic.

He also pushed back against the notion that it was Saldana who brought Simone to public consciousness, or her story to the silver screen;

“Zoe, you are a fucking lie. You didn’t win shit. We are undoing the damage you have done. We are working overtime to get the narrative out there for those people who had never heard of Nina or that didn’t yet know who Nina really was: a beautiful, strong, proud, genius Black “reincarnation of an Egyptian Queen” (as Nina often reminded us).

The film in which you participated is not #1 in a series of films. First of all, that film doesn’t fucking count. Second, no more films need to be made. Between “Nina Simone: La légende” (by Frank Lords, 1992), “Nina: An Historical Perspective” (by Peter Rodis, 1970), “The Amazing Nina Simone” (by Jeff Lieberman, 2015), and the final capstone to Nina’s legacy: “What Happened, Nina Simone?” (by Liz Garbus, 2015), Nina’s story has been told.”

In the past Saldana has admitted that she was wrong for the role, so this newly defensive stance is both surprising and disappointing.

What do you think of Zoe Saldana’s recent remarks?

Wow, just wow. Forget all that Nina Simone has done, and let’s just give Zoe a cookie for putting Simone on “the map.” This chic is more clueless than I thought.

Nina was and still is polar opposite of what America defines as “beautiful”. Her natural aesthetic, strong presence and temperment requires someone in Nina’s likeness to play her character. Zoe ain’t hitting it and never will because she’s opposite of Nina in almost every category. A bunch of makeup with a prosthetic nose isn’t going to change that.

What do I think? I think she obviouly hs not seen how she looked and sounded in this horrible movie tht the critics and movie critics shunned. Ugh

she is so freaking clueless I swear, always playing the victim smh

Ugh, Zoe. No one is here to revoke your black card or pigeonhole blackness. But I need you to check your mirrors for the colourist/racial blind spot you obviously have. Yeesh.

Reminds me of the minor backlash Thandie Newton got for playing a Nigerian woman, yet the situations are completely different. Complaints were that biracial Thandie’s casting reflected Euro-centric standards and colourism, and they were right the indigenous people of Nigeria are Black,there is no history of racial mixing nor are mixed people considered to be anything but mixed race or even white. AAs cling to the One drop rule and support the belief that as Zoe said,“There’s no way to be black.” Yet there’s is a difference between Nina Simone’s blackness and Zoe’s? If AAs continue support that there will be more erasure… Read more »

Zoe needs to do what my username says

Hmm…Some good points made here.…Just noticed though…Where’s the comment I made nearly two days ago?

You know how if an actor or actress had to completely change their looks by use of prosthetics, or gaining/losing weight, they would surely get an Oscar? Well, I think this is what Zoe thought. The point has been made, let’s let this go.

She is confused and dismissive of who she is first, that’s is why she is attempting to rationalize accepting a role that is dismissive of the epitome of who Nina was. Please fight your own self hate battle else where but not on NIna’s name. We knew who that strong black woman is. She accepted and embraced all of her when it wasn’t vogue to do so. You still can’t bring yourself to accept who you are!~ “Bye Zoe!!” Go lick your half my family look like that pity party wounds elsewhere!!!

You know how sometimes you can read people. You don’t know them but you got their number spot-on. I keep picking up a certain mindset from Zoe.