Many of us rely on bloggers and vloggers to vet a product before we purchase it. This is especially true of cosmetics. Why go through the hassle of trying a product and returning it when you can watch your favorite beauty vlogger test it out and share her honest opinion on Youtube? But alas as beauty vlogging has gone from hobby to full-fledged business, it’s becoming harder and harder to trust these reviews.
A few weeks ago, Becca Cosmetics launched their huge collaboration with beauty vlogger Jaclyn Hill. The brand threw a pre-launch party in New York City inviting only top influencers. Many of  us watched our trusted vloggers on SnapChat as they shared swatches and samples and oohed and aahed over the collection.  The brand also sent press samples of the collection to even more influencers. After the event, the online beauty community became saturated with review after review of bloggers and vloggers raving about the collection which included a new eyeshadow palette.  The swatches the brand released were very convincing: 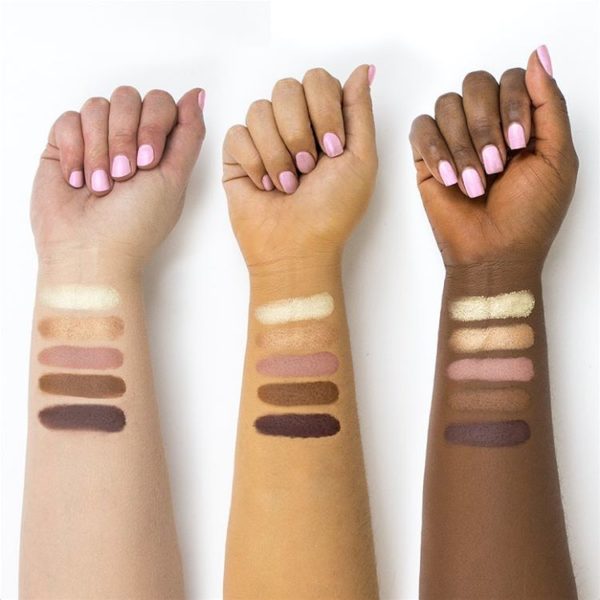 Black makeup-wearers no doubt rely on swatches like these and those of our trusted beauty gurus more than our fair-skin counterparts because we know makeup companies are notorious for not sampling their products on deep skin tones. Becca Cosmetics, however, is one of the few high-end brands that routinely shows their products on dark skin. Thus with these swatches and the reviews of several black beauty vloggers vouching for the pigmentation and the creamy texture of the shadows, we had no reason to believe there was anything wrong.
One vlogger went on to say it was a “must-buy”, one admitted that some of the shadows felt short of her expectations, but also said they were buttery and pigmented. Another stated that the shadows were light, but gave the palette an overall positive review, insisting that it was a good palette that showed up nicely on her dark skin.

Vlogger Rita B, who was not sent a PR sample and is familiar with the quality of Becca Cosmetics eyeshadows, however, kept it all the way real with her review. She discusses the palette’s strong chemical odor, which was unlike her odor-free experience with her other Becca eyeshadow palettes. She even discusses Googling the ingredients in the palette to find only two other companies who sell eyeshadows with these ingredients. The two brands she found, Catrice and Essence, are affordable cosmetics brands that sell eyeshadows and eyeshadow palettes for $4-$8. The Becca Cosmetics Jaclyn Hill Eyeshadow Palette retails for $40.

Rita’s whistle-blowing sparked a huge controversy in the online beauty community, as many of us felt duped by the reviews we had seen prior to Rita’s. What’s worse is that Becca Cosmetics admitted to the sub-par quality of the shadows and have opted to cancel the restock scheduled for June 16th. Those who purchased the palette via Sephora’s online store are welcome to return it for a full refund. Becca Representatives issued the following statement to Bustle:

At BECCA Cosmetics, we embrace genuine and open conversations with our consumers. While we heard many were loving the Limited Edition Eye Palette, others expressed disappointment. We hold ourselves and our products to the very highest standards of excellence. Our consumers are our guiding light and if we are not confident our BECCA Beauties will fall in love with a new launch, we believe the best path is not to launch it in stores. Our core brand value is, as always, to please our BECCA Beauties, and we’re so thankful to them for their continued support.

We’ve all grown suspicious of beauty reviews as of late, but this latest revelation sheds a light on the growing problem of influencers kowtowing to brands as opposed to remaining the seemingly authentic people we’ve supported and helped rise to influencer stardom. Hopefully going forward, bloggers and vloggers can find a balance between pleasing the brands and being truthful with their readers/viewers.

Are you late!? Hello! I saw a very famous drugstore beauty blogger RAVE about a pencil shadow that washed away with SWEAT, and looked terrible on dark skin. These ho’s ain’t loyal!

There are only 2 bloggers I trust: Naptural85 and Glamtwinz

That’s horrible. As a (new) beauty blogger myself, my reviews are always pretty detailed and honest. We owe that to each other!
You can find my blog at http://www.sassycritic.com

That shouldn’t stop them from being completely honest though. It’s a shame.

Shame, shame. That’s why I stick to my holy grail.

You have to take advice with a grain of salt and do research for yourself.

jackie aina does this A LOT. i really can’t trust her anymore. she spoke soo highly of this palette and had the audacity to say ‘black people are just haters’ when people started complaining about it. i remember when she threw shade about companies producing contouring kits and she said they were unnecessary next thing she was doing reviews about contouring kits and telling people to buy them, like HOW????? She also said soooo many good things about the anastasia beverly hills liquid lipsticks until socialitesande and beautybyjj came out and told us the actual truth. im really beginning to… Read more »

I completely agree! I realized this when the Laura Lee x violet voss palette came out. She also gave a positive review on the violet voss holy grail palette. I ordered both and the pigmentation was not great on my skin tone. I’m looking side-eyed at most of them now.

I think we already knew that advertising is paid for.