A Smear Campaign is Building Against Lupita Nyong’o 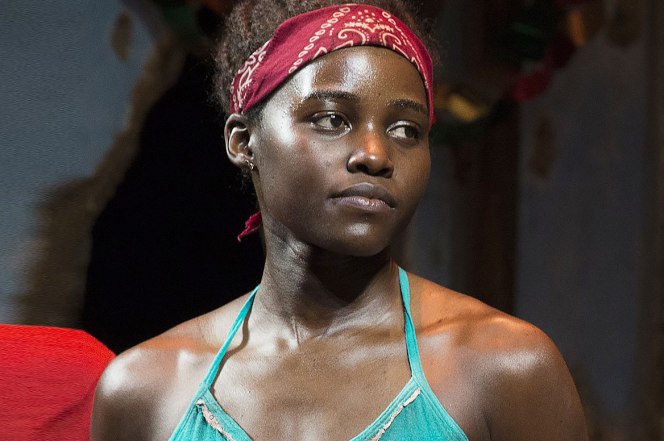 Rumors have started spreading about Lupita Nyong’o being a diva on Broadway and angering Eclipsed audiences by missing shows. Page Six broke the story yesterday quoting sources close to the play. Other media outlets, including Atlantic Star, Morning USA, BET, and Perez Hilton have since run with the rumors discussing the effects of the actress’ “behavior” on future ventures.

“Wednesdays are her days off, but there was never an announcement, so fans are pissed when they come to the show and she’s not there,” said the insider, who adds that Nyong’o gives “exhaustion or ‘I have a sore toe’?” as excuses for skipping work.

“They were banking on her fame and have not seen a return. The most disrespectful thing is taking off every Wednesday while being seen hanging out with Misty [Copeland]. If you’re too tired to work, stay in bed.” — Page Six

The reality of the situation is this.  Telecharge (via Ticketmaster) states that Nyong’o does not perform on Wednesdays, so fans wanting to see her should know ahead of time.  (The actress performs in seven shows a week.)  The casting of two performers for one role is not abnormal for big plays, including those on Broadway.  The same happens in operas.  This is nothing new. 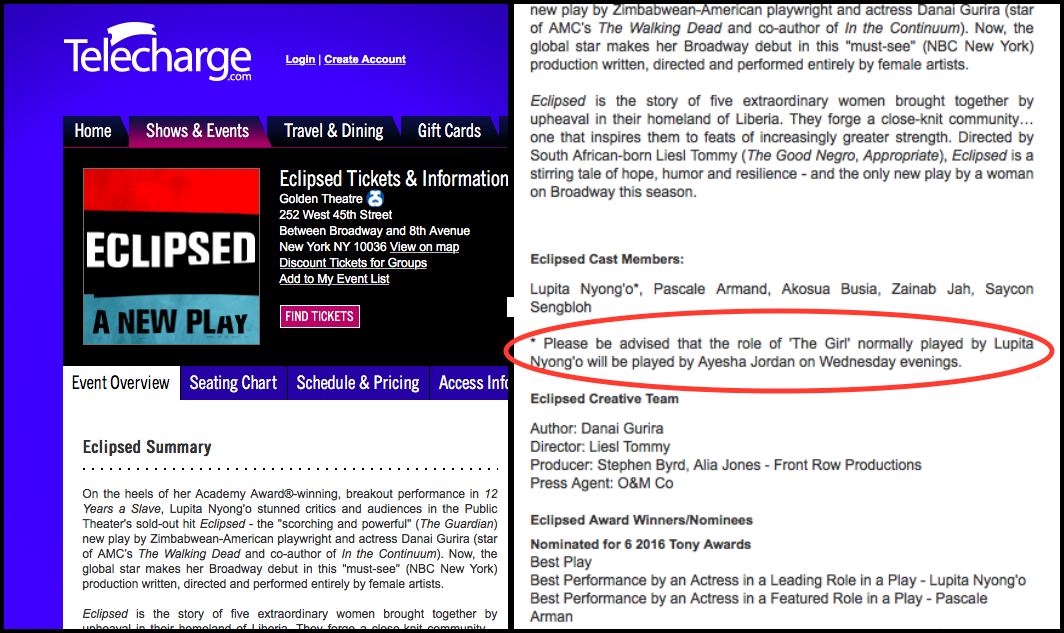 Apart from her acting role in Eclipsed, Nyong’o partakes in other ventures, including promotion of the Broadway play and filming for Queen of Katwe, just to name a few. So what is the problem? Can’t a lady have a day off?  And since when do others get to dictate what one does on a day off?

These, however, are not the first rumors to start about the actress’ behavior.  Last November, media outlets were quoting “sources” who described Nyong’o as an “ice-cold diva” who refuses to speak to her Eclipsed cast mates when not in character (Daily Mail).  Then, in December, it spread like wildfire that her role in Star Wars: The Force Awakens had been massively “cut down” because director JJ Abrams was left “unimpressed” (Metro).  However, Abrams came to Nyong’o’s defense and slammed those rumors:

The number of rumors floating around about ‘The Force Awakens’ is truly stunning. Some are wonderfully funny, others simply preposterous. But the only one more ridiculous than Jar Jar Binks being a Sith Lord is that I cut Lupita Nyong’o’s performance because it wasn’t satisfactory.

In truth, her performance wasn’t satisfactory. It was spectacular. She has brought the character of Maz Kanata to life in the most wonderful, wise, touching, deep and funny way. Lupita never ceased to amaze me. Yes, we tried many approaches, and we finally landed on just what the film needed. She elevated all the scenes she is in, I’m forever grateful, and can’t wait for people to see her stunning performance. — JJ Abrams for Page Six

Additionally, Nyong’o comes off as the complete opposite of an anti-social, ice-cold diva.  The following video is of her playing an April Fools’ prank on her cast mates: 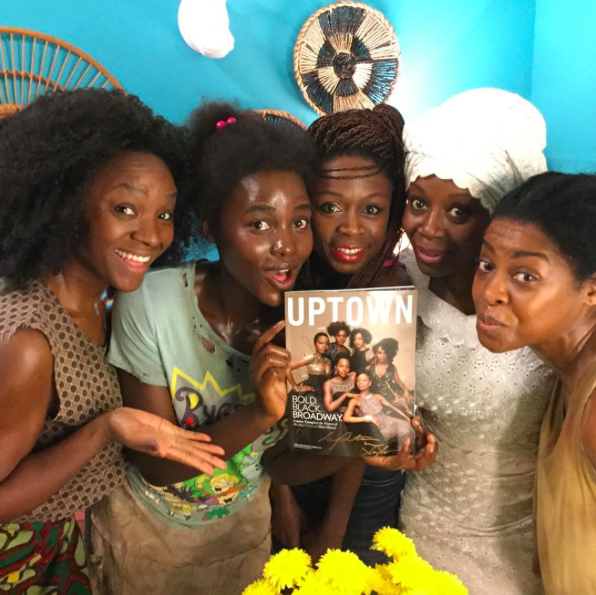 Frankly, all of this unfounded gossip about Nyong’o being a diva makes us wonder if there is a smear campaign against her since she is one of the more successful (black) actresses out there.  Throw in dark skin, too?

I think as women, as women of color, as black women, too often we hear about what we “need to do.” How we need to behave, what we need to wear, what’s deemed as too much or not enough, the cultural politics of what society considers appropriate for us and for our lives. What I am learning is that the most important questions you can ask yourself are “What do I want?” and “Who do I want to become?”

Many of us here can testify to facing such criticisms, which seem to increase with one’s level of professional success and, dare we say, complexion. Nyong’o, being a successful dark skin, black Oscar-winning actress, probably faces even more condemnation, and these rumors appear to support that reality.

Do you think others are being too hard on Lupita?  Share your thoughts below!

I don’t really know about this. It’s common when you’re the it girl, for a ton of stories to come out about you. I’m not sure if it is race related in this case. It maybe a matter of she’s the hot girl at this time, and any salacious story put out about her will get tons of clicks. You can clearly see it’s not holding up when you have to critize what a grown adults does on their off days. These stories about her are reaching so hard that it’s downright comical– “The most disrespectful thing is taking off… Read more »

I think we should stop see “black hatred” all the time. She is a prominent actress. A celebrity. So as everybody else she has a fair share of rumors, stolen pictures, being called a diva etc. She is (mis)treated like any other star.

Please think about how being labelled a Diva for asking for time off to care for her kids nearly ruined Monique’s career. There are many rumors one can spread but the one that implicitly suggests you can not do your job can make you lose your job. It is also undeniable that to state Lupita isn’t showing up for a job because she hurt her toe when the schedule says she doesn’t come in on that day bears traces of malice.

Because she’s a beautiful darkskinned woman, who’s getting the attention as “lightskin/white” women are supposed to be getting and they hate it. They want this woman to fail so bad, so people can be like “I told you so”. It’s pathetic really. I’m glad she pays it dust.

She is such a sweetheart, of course jealous people will try to give her a bad image, because she don’t fit the stereotype that they put black women in.

it isn’t entirely about her being a dark skinned woman. Lupita expects to be respected and while she is civil and friendly, she does not cowtow. She isn’t one of those women who are just glad to have been invited. She shows up and does her job as professionally as possible, if the chemistry exists she is warm. However some white people who expect and are accustomed to a certain level of reverence from black people, if you throw in the fact that she is black and African the expectation heightens. So the problem isn’t so much that she is… Read more »

The theater can.be extremely grueling with performances everyday for months! I’m glad, especially if it’s in her contact, to take a personal day off. I’m glad for her and she is showing us to be our own decision makier.…in whatever forum or art form.

The parasites are on the loose. The more successful she becomes the more they will try to bring her down and sadly they will do with the help of the plantation coons

In light of the Weinstein revelations, I think we know exactly where this smear campaign came from now.