A few weeks ago, Kandi Burruss-Tucker shared a video on Instagram of her 4‑month-old son, Ace, using the potty. Kandi encouraged all parents to start potty training their kids early so that they can get used to using the toilet. Kandi’s video and advice were met with shock and disapproval. 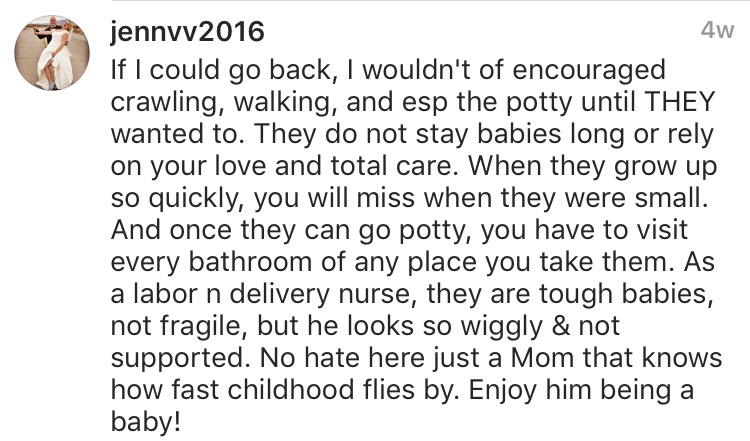 Some time later Kandi posted another photo showing then 9‑month-old daughter Riley using the potty to show that it is something she had done before successfully. 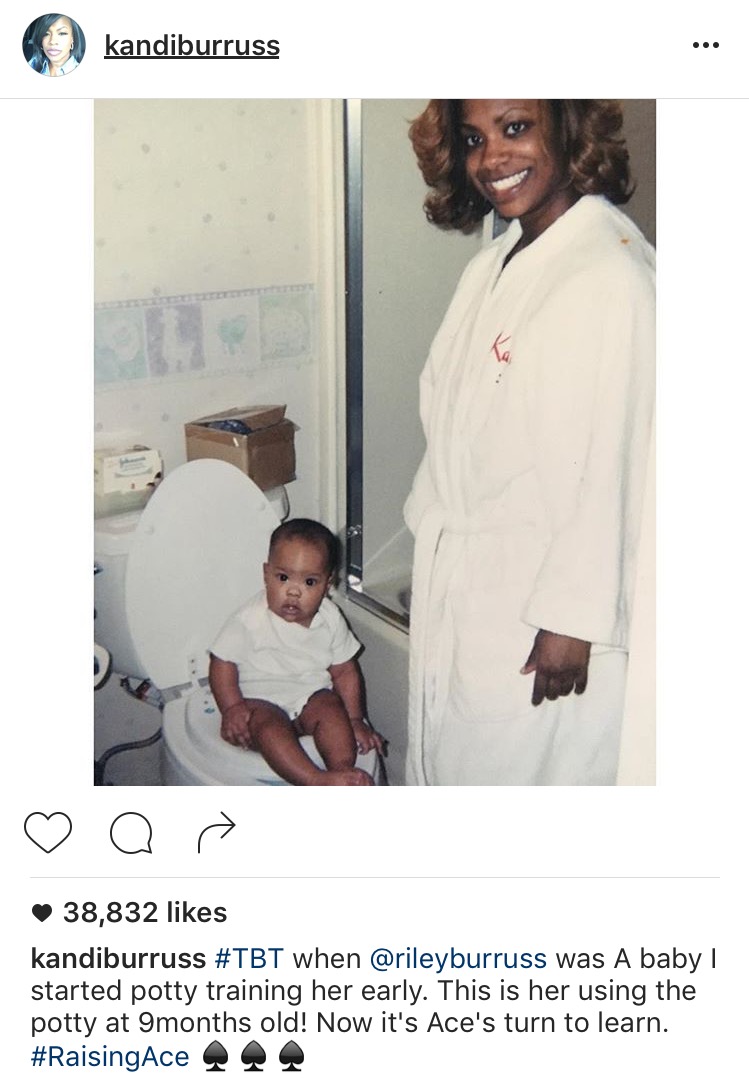 Still, fans weren’t convinced. But the reality is that they are simply ignorant on the subject. Here are 5 reasons why Kandi isn’t strange for teaching her children to use the potty at an early age.

1. Early Potty Training is Common in Other Cultures

According to an article written by Gwen Dewar for ParentingScience.com, in many non-Western cultures, infant potty training is the norm. India, China, and some parts of Africa leave their infants bottoms uncovered so that they may relieve themselves. Conversely, Western culture relies heavily on diapers. Some cultures consider diapers to be unsanitary and a hindrance. When babies need to go, parents simply hold them over a toilet or let them go right there on the ground. How do parents know when their babies need to go? Since it’s common practice to carry your infant constantly in these cultures, they simply read their infant’s cues.

2. Potty Training from Birth is Becoming Popular in America

Elimination communication, also known as early potty training, is becoming increasingly popular in the United States. It doesn’t have a name in other cultures because they don’t know any other way. In America, the average child doesn’t learn to independently use the potty until he/she is 3 years old. In other cultures, infants are completely trained to independently use the toilet at as young as 6 months old. Diaper free babies may be considered a “hipster” trend in the United States, but there is an entire movement surrounding the topic with the current generation. Much like breast feeding, moms have meetings, Facebook groups, and clubs where they can encourage one another in their elimination communication efforts.

3. There are Many Benefits to Early Potty Training

According to MamaNatural.com, there are tons of benefits to potty training your infant.

I don’t know if any of you have noticed the price of diapers these days, but they can really hurt your wallet when you need to buy them constantly. In an article written by Paula Pant for Aol.com,  the average American spends around $30 to $85 per month on diapers. But if you potty train during the newborn/infant stage, you would save roughly $360 to $1,020 per year. Baby elimination communication is starting to sound very appealing.

5. It’s None of Our Business

Although Kandi put it out there by sharing a fun moment with her son Ace, it really is no one’s business when it comes to whether or not she should potty train Ace early. Kandi is the mother and we’re just looking in from the outside. Deciding when to potty train a child is a personal decision and Kandi shouldn’t be reprimanded for doing something that isn’t harmful, unusual or dangerous at all.

Ladies, what are your thoughts on infant potty training?

This is actually really interesting and I had NO idea people did this in other cultures. I’m not a mommy yet but I think its a subject I will revisit when I have little ones.

I’m not amazed by this. It seems that English speaking cultures regard and want infants to be completely helpless when some of them can actually do some things themselves. I have a younger sister and a nephew who both got really angry between the ages of one and two if they weren’t allowed to relieve themselves as other people did when they asked. They may have worn diapers but that was for the accidents as they were both potty trained. In regards to feeding themselves this nephew was mixed bottle and breast fed. By two months if he was given… Read more »

It’s a GOOD idea! I.wish I would have started potty training sooner! ENJOY

My mom potty trained us early…Not this early, but if we could crawl, it was time. I was a fully functional toddler by 10 months, plus I was a tall child.

So this seems good in my book and definitely something I’ll do when I have kids.

I’m sorry but back in the day when mothers where using flannels instead of disposable diapers, they started potty training early. I personally don’t like disposable nappies AND as a foster carer I have seen how traumatic it can be for some toddlers learning to control their bladders and the embarrassment of wetting themselves while doing so especially when the training is left too late.

I have seen early potty training and I always wanted to try it but never did. Unfortunately, I waited until my kids were 1–2. I feel bad for babies, because who wants to sit in a wet diaper all day? I mean, they cry so they must hate it. As far as the criticism, that’s why I don’t share my parenting practices with others because they always want to tell you what you’re doing wrong. I swear most people (with AND without children) think they’re parenting experts and child psychologists. What I’m teaching my children is nobody’s business but those… Read more »

My first thought was that this was odd. Not wrong but just odd. But then I remembered we live in America. In other places where they can’t rely on the luxury of having diapers at their fingertips, and never had to, its common. I mean, if we can wean and teach babies around that age to eat solid food and hold their own bottles then why can’t you teach them how to go to the toilet??

I learned this from a woman from an African culture over a decade ago. At the time I was shocked, however, I learned that I was ignorant. I am glad that Kandi has retained some of our cultural knowledge. Good for them!

I potty trained my child “early” because that is how my family has ALWAYS done it. We started when she was able to walk. She was fully potty trained by 18 months

I learned about the early pottiy training in a child development class and I always thought it was a good way to potty train your child. On a personal level, my mom started potty training my brother and I as soon as we could walk, in my case 9 months. She said if you can walk then you can use the toilet. People are ignorant to how things are done in certain cultures but hopefully one day more people will start embracing things that aren’t the American norm.

I remember this becoming a huge trend years back when I was pregnant with my youngest child. I thought it was ridiculous then. Now, it’s still not something I would do at that early of an age but that’s more because there’s so much other stuff to do and think about when you have a 4 month old so potty training would be the furthest thing from my mind at that point lol! But kudos to people who do it and make it work!

this is completely ridiculous. point 1 about other cultures letting their kids shit while they walk is freaking barbaric. there’s a point when we need to stop the foolishness for the sake of being different or unconventional, and just be damn adults…sm…a damn 4 month old sitting up and defecating…as if lil dude is comfortable.

I remember hearing about similar methods to this years ago and being shocked only to find out my mother used this on me! :’). She started potty training me at 6 months, basically around the age you can sit up by yourself, and by the time I could walk, I could use the potty myself. Funnily enough refused to use normal toilets when I was old enough too, cause I was so used to using the potty :’).

I really enjoyed this post. I have two boys now young men 20 years old and 18 years old. My 18 years old son was trained by his paternal grandmother to go to the potty at 10 months…never wet the bed as a child or anything. he always let someone know he needed to go to the potty. My 20 year old was trained my his maternal grandmother to go at 3 years old, because that is just how she did things. Both my boys are fine but totally different people. Folks do what works for YOU and YOUR child… Read more »

A better title for the article would be “5 reasons Kandi Burruss isn’t WRONG for potty training her son at 4 months old.” It is definitely a strange thing. This is America. The vast majority of Americans don’t potty train until the kid is 1 or 2, so yes, what she is doing is very strange in America. It’s not wrong (and there may be some benefits to it) but it is strange.

Certainly saves further waste (of landfill) to the environment and is more natural. I didn’t think babies could sit up at 4 moths old, or should be sat/propped up that early though.