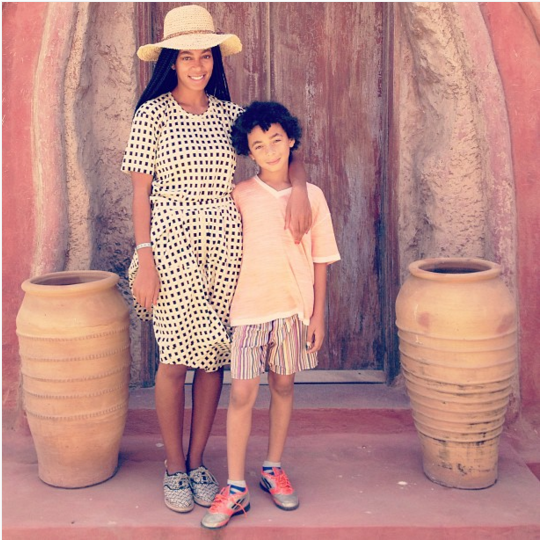 Solange’s son Julez just completed the 5th grade and the proud mom recorded the ceremony during which Julez spoke in French, a language he is learning to speak fluently.
https://www.instagram.com/p/BF0DXCKQoiM/
However, one fan felt that Solange was hindering her son’s connection to his heritage by not having him to learn African languages. Solange, never afraid to speak her mind, responded by explaining the benefits of having a French-speaking child given that it is a common language in many African countries. 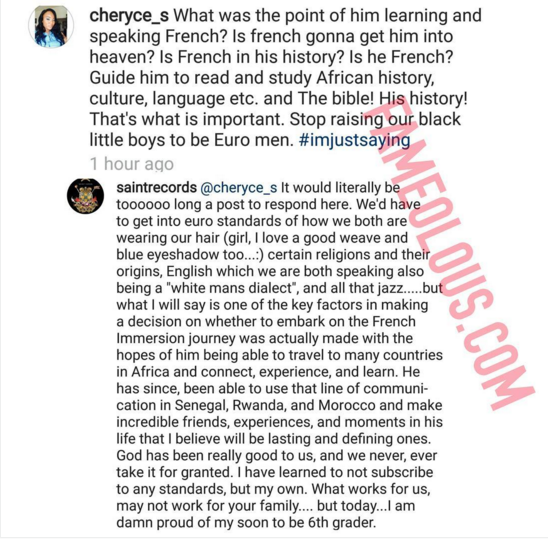 After this burn, the commenter had to take a step back and collect herself but not before Solange whipped up another slick quip. However Mama Tina issued the final word that sometimes it’s just best to pay the negative no mind at all. 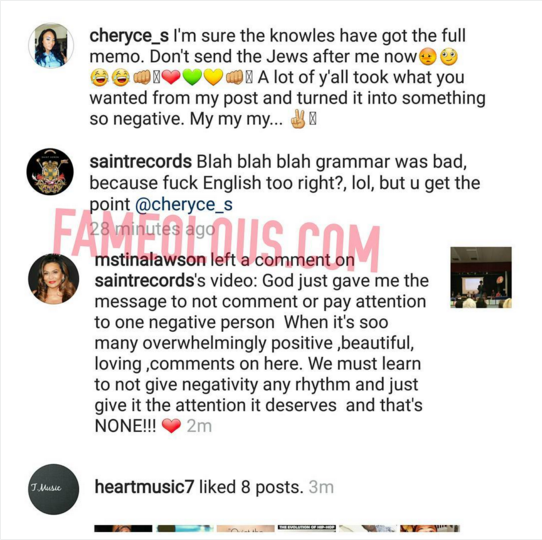 Does she not know they have both African and French ancestry? Does she not know half of central and west African inhabitants speak French? Finally, what does it hurt HER that Solange’s son is speaking French?

Is she dumb or what I can’t deal with some people. There are 26 countries in African where french is their official language and 4 in the Caribbean.

They scalped HA!! Do not mess with Solange. Just ask Jay Z. And dead @ that troll saying the bible is African history LMAO!!! Can I just say that I love Ms. Tina’s instagram? She is so cute. Go Ms. Tina!!

What is the matter with people? Whose business is it what language her son learns? Who is in charge of raising her son? I’m not a fan of Solange or anyone else in particular, but she shouldn’t have wasted her time responding to these trolls who feel that they need to tell strangers how to live their lives or raise their children.

I’m proud of her and her son! Inspires me to polish my french.

I don’t get it. As she pointed out English is a European language yet I have never heard anyone criticized for learning it. Most people I know from Africa speak several languages. Also isn’t the mom from South Louisiana. I know people born and raised there who speak a form of French.

So many African countries speak French…not to mention Haiti. It’s difficult to teach some native African tongues because there no books for it. I tried to learn Cape Verdean Creole which is a mixture of the native language and Portugese, but failed miserably because there’s no textbook to learn form. I think French was an excellent option. Congratulations to Juelz

Too bad, through French you would have found books about it
http://livre.fnac.com/a1968706/Nicolas-Quint-Le-creole-capverdien-de-poche

The funny thing is this girl herself probably never set foot in Africa and never will. The majority Africans I have met speak French! Blacks in America do not even bother to learn another language.

You mean, the blacks in America that you interact with, right? Please don’t generalize for all of us.

Please do not generalize. I am African American and I have been taking Spanish since the 3rd grade and took it up in college. Thanks.

Wow. I hate to ruin your little fantasy about how blacks don’t bother to learn another language. Just because you don’t know any Black person that speaks several languages doesn’t mean they don’t exist. I have met plenty of BLACK AMERICAN translators. Most black people I grew up with spoke Louisiana Creole as a first or second language. (I was born and raised in Louisiana). I am black and the languages I have learned either at home, in school, with the help of friends, or by myself: American/British English Louisiana Creole French Spanish American Sign Language Russian Greek Turkish Arabic… Read more »

I don’t understand why Blacks outside of the American context are always concerned with Black Americans. We’re doing good over here, don’t worry.

weird you single out blacks in america when americans in general don’t speak second languages.

but the reality is that, nonamericans learn other languages because they have to, not because they are interested in other cultures, etc.

the us has the biggest economy in the world and english is its primary language. plus, we’re also more isolated than others. so, we mainly speak english, for better or worse.

This is why I don’t use social media like that. People want to be mad about everything.

Funny thing is, even here in South Africa a lot of people would much rather learn French, Spanish or something else European than any other of our ELEVEN official languagesite which apart from English are all African… here in AFRICA. It happens everywhere. Not everyone understands or sees there to be a point in learning a language that not many people admire but that’s okay

LOL I’m African (Ghanaian) and I can confirm that Ghanaian children learn English and French from primary school…and local languages too. Plus loads of African countries speak French/English as a national language. So please don’t speak about how you can ‘communicate’ with us, we speak English thank you very much.

and which language among 1500–2000 that exist in Africa he should learn eh? This person is clearly dumb af

I love how Solange always claps back with facts! Side note, I also love when people like this get put in their place. Stop trying to tell mums how to raise their kids. I bet she can’t name even one of these “African” languages she thinks Juelz shoud be learning. I’m no expert, but anyone who knows a good amount of African history knows that French is widely spoken language in many countries and it’d be better to learn that instead of one of thousands of African languages since the country is so huge and diverse.. I love when these… Read more »

Wow this isnt your average everday stupid, this is advanced stupid. Both Solange and her son are mixed and not to mention that she’s communicating with them in English! And on top of that so many black countries speak French officially in The Caribbean and Africa. This person should just crawl back under the ignorant rock that they came from.

And can I just add.… the Bible is not the book of our people either.…