Madonna, who performed the Prince Tribute during the Billboard Music Awards last night, posted the following picture to her Instagram account and Prince fans were none too pleased: 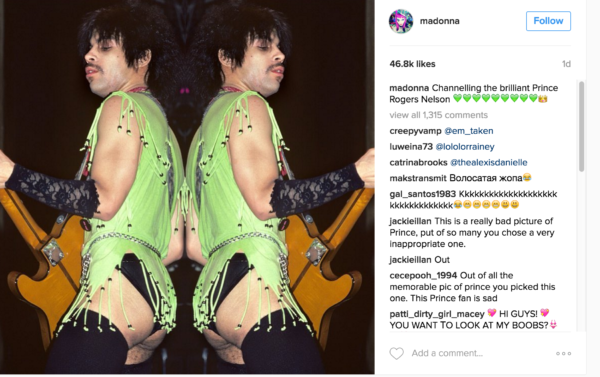 While the world is accustomed to Prince’s gender-bending fashion, this particular image — shot from an unflattering angle and focused on the singer’s derriere — felt disrespectful to the singer’s legacy, according to several miffed fans.

When it was announced that Madonna would be performing the Prince tribute during the Billboard Music Awards on May 22, the internet lit up with fans questioning whether or not Madonna had the vocal chops to do the late singer justice. Moreover, some felt a black artist would have been better suited for the job. A change.org petition was even set up in an attempt to block Madge’s performance. In the end, Madonna, with an appearance by Stevie Wonder, did go on to perform some of Prince’s greatest hits during the ceremony, but not everyone was impressed.

Minutes after Madonna’s performance BET tweeted a short video clip announcing the network will be doing their own tribute: 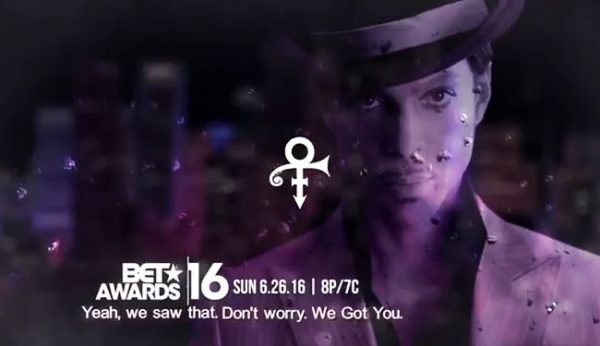 Did you watch Madonna’s Prince tribute performance? What did you think?

Isn’t this the way that Prince presented himself to the world? If so, Then why be upset about Madonna posting this pic? Prince did support Black causes, but in music/dating, he usually had other-race women by his side. Why have Black women so quickly forgotten this???

No. This is not the way Prince presented himself to the world. He grew as an artist and as a public personality into an articulate, classy person who had respect for himself and for others. For Madonna to present him this way is NOT cool. The persons he married or chose as love interests is beside the point.

He was in concert during this pic. Maybe he liked it, as well. We just don’t know.

Prince presented himself to the world this way in the late 70’s early 80’s. When did you see him in recent performances dressed this way? This was BLATANTLY disrespectful because Prince had matured from that period of his career to the point where he no longer performed his grittier classics like ‘Erotic City,’ ‘Gett Off,’ ‘Sexuality,’ to name a few. This dried up broad is still seeking relevancy in a world that no longer includes her. She did this in an effort to hopefully grab attention for herself. Her profanity filled Twitter rant speaks volumes about her motives. By the… Read more »

I haven’t seen Prince in concert, and wouldn’t have had the desire to. I don’t follow him, or Madonna, and he turned me off s long time ago once I realized he didn’t care for Black women. When I did I suggest that the others that you mentioned have done anything for me? Lol!!

This was Prince then, this is not the person he was when he left this earth. He was a strict Jehovah’s Witness and believed in his faith. This is not how or anyone wants to remember Prince with his ass hangin out. I don’t think you were a true Prince fan if this is what you think he wanted himself to be remembered, hence the reason us true fans are upset with this picture when there are so many other beautiful, tasteful photos of Prince to show. I agree with good2bfree.

Actually, I haven’t been a Prince fan for decades, but I did hear years ago that he was Jehovah’s Witness. The point is if you’re going to put your ass out for all to see, unfortunately, it will be up for grabs any point in your life, or in this case, death. Clearly, he was in concert during the time this pic was taken. Maybe this is her fav pic of him, who knows. My point of noting that Prince was not a fan of Black women is to say that of course a White woman would be chosen for… Read more »

Prince proudly put this outfit on and many others like it. He knew how he looked. How is it disrespectful?

Prince wore this outfit in public and appears to be performing in front of an audience as well. What on Earth is wrong with Madonna showing Prince as he presented himself? People want an excuse to be mad.

I don’t think its the outfit. Sometimes photos are taken at unflattering angles. I’m pretty sure this is something many people can understand.

How is that even an unflattering angle?! Prince still is still Prince. You all just think you own his image or own his life now that he is dead, and it is sick and childish.

Rose I don’t own anyone’s image or life but my own. Please stop lol.

I see both sides of the story. On one hand, Prince did evolve from this. On the other hand, back in the 1980s, he and Madonna both were very raunchy and sexual musical acts. So I see why they asked her to do the tribute, however, someone black who could really appreciate all that Prince embodied would’ve been better suited. In modern day, I think Miguel could have pulled it off without a hitch.

So glad BET will be doing their own tribute to Prince, I can’t wait to see it. Madonna sounded awful, those songs were not written for someone with her bland voice.