Kerry Washington: My Life Was Toxic Before ‘Scandal’

Very few people are born into success. In fact, many successful people are quite candid about what they had to lose in order to rise the top. Kerry Washington is no exception. Known for being tight-lipped about her personal affairs Washington, who is the star of the hit TV show Scandal, opened up about ridding her life of toxicity during an interview on Oprah Winfrey’s Super Soul Sessions.

There was a period before Scandal when I went into the wilderness..And for me, what that meant was there was a lot of toxicity in my life: people that I needed to let go of in a personal way, in a business way. And also I felt like I had been living my career kind of on autopilot.

It is not hard to imagine why Washington felt this way. Prior to Scandal, she was engaged to actor David Moscow (also known as the bad guy from the dance movie Honey) for three years before it ended. And, despite starting her career with acclaimed performances in films like Our Song (2000), Ray (2004) and The Last King of Scotland (2006), she went on to perform in critically panned films like I Think I Love My Wife (2007) and Fantastic Four (2007).

Washington went on to discuss how she accepted a role in a Broadway play in order to get back to her artistic self. Doing so meant taking a pay-cut, and losing endorsement deals. 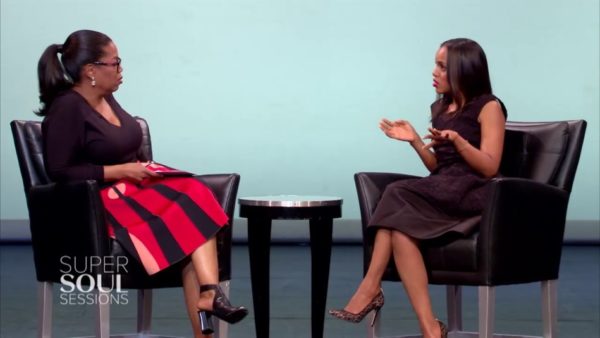 In that period I let go of a lot of things and a lot of people. I experienced a lot of loss professionally. I had, for example, companies that I was working with on an endorsement level that walked away from me because not everyone thinks Broadway is sexy. And my personal life changed a great deal. I allowed myself to be open to change in my personal life. I don’t talk about my personal life every often, but that’s true.

Washington likened the ritualistic nature of performing on Broadway to going into a monastery.  Going to the same place eight times a week saying the same lines repeatedly forced her to commit to learning about herself as an artist.This “going to to the wilderness,” says, is what prepared her for her role on Scandal.

I just wanted to commit to that ritual and let it teach me about myself and just unfold.

Here is an excerpt from Washington’s interview:

We love that, when Washington does choose to discuss her personal life, she comes with those gems of wisdom!

[…] one point she even described her life as being “toxic,” before Scandal.  Click HERE to read that interview.  Her resilience and candor makes her one of the few hollywood actresses we […]

Toxic. That’s interesting. Is she referring to that one time she slept with her one of her glamour teams man?

Toxic is toxic. Your toxicity could be self-righteousness. We all have toxic issues in our lives. She chose to move past that moment in her life. We would be wise to do the same.