Something very disturbing happened to make-up artist Takara Allen, 22, when she started chatting with a man named Nikolas on the dating app, Tinder. Nikolas may have thought he was giving Allen a compliment when he said she’d look pretty if she were whiter, but Allen didn’t see it that way and rightfully so. 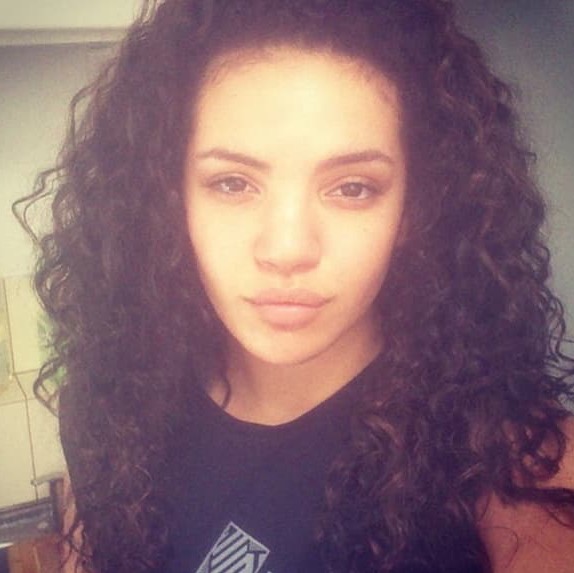 Allen didn’t let Nikolas get away with his racist remark. Not only did she have some harsh words for him, but she posted their text message exchange on her Facebook page. The texts went viral, with most being in support of Allen. 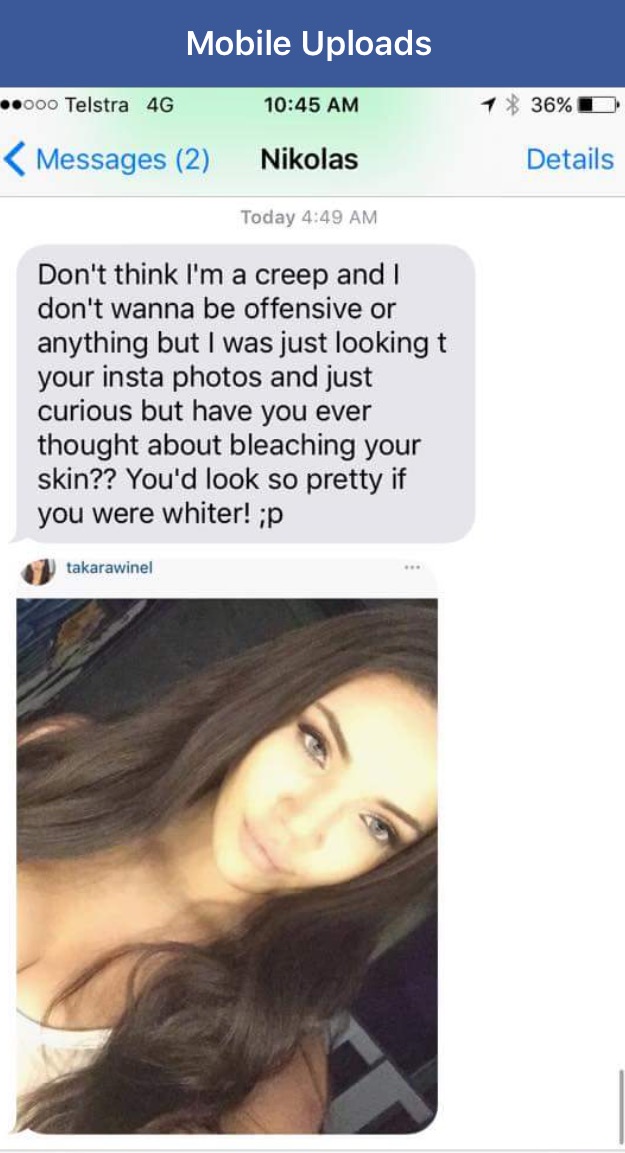 The incident made Allen so frustrated that she started crying. No one ever told her to bleach her skin before and as a result, she was able to partially understand why some Black women wish to be lighter:

“There’s so much pressure for people of color like myself to conform to European beauty ideals and standards,”

“In most cultures being ‘paler’ or ‘white’ allows that individual to be treated better due to systematic racism and we are taught from a young age that being ‘whiter’ makes us more desirable and attractive.”

Allen, who is of mixed race but identifies as black, thinks it’s appalling that black women are still expected to fall in line with the white woman’s standard of beauty. She posted this message along with the screen shots of the conversation that she had with Nikolas. 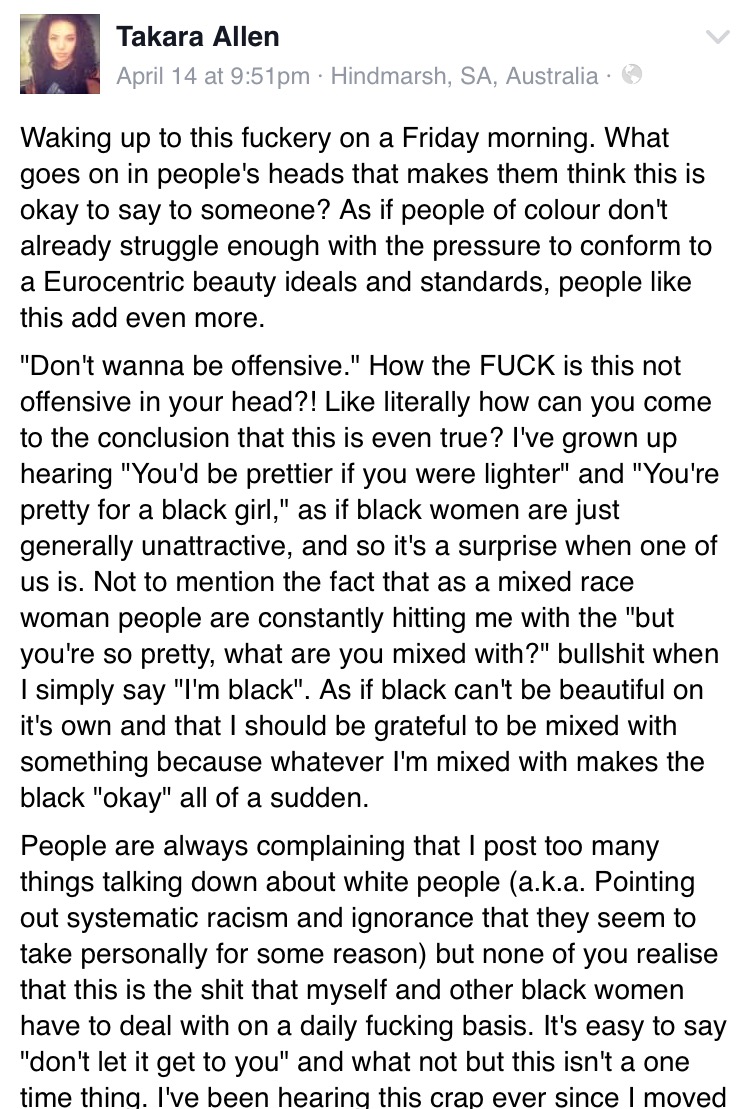 Allen also acknowledged, in an article written for The Daily Mail, that she now accepts that she has light-skinned privilege. She also has a better understanding of how pressured dark-skinned women may feel to be lighter:

“I acknowledge and accept that I am treated somewhat better because I am not as dark as others so I can see the situation from both sides of the fence,”

“Both being treated and spoken to poorly because I am brown, but also benefiting to an extent from white privilege because I am light-skinned. Now that it has been personally directed at me I can understand better how those that are darker than me feel on a daily basis and I feel their outrage so much more than I did before.”

“I would never wish how I felt receiving that text message on anyone. I was devastated.”

What are your thoughts?

She’s not even mixed, just light skinned. But she had to post a pic with a caption telling people to stop thinking that she’s calling out white folk. People thought she was bitter, smh

She is mixed but identifies as black ( whatever thst means!)

This incident happened in Australia she said? Enough said. That sad little place is rivaled by white South Africa for its virulent racism. This ‘Nikolas’ sounds like a slavic name, which is what I always tell people here in London, that Eastern European have reawakened overt racism against blacks that was kinda on the wane in the UK. They take their backward attitudes everywhere. Ladies, when online on these dating sites, and some white guy contacts you, don’t be flattered(sadly some women feel honored that a white guy validates them) but vet the hell out of them. Pick their brain… Read more »

Yess . The fuckery is real,but what gets me is . These cave beast mfs feels as if they can say what ever the hell they want to you. A perfect stranger, and when you rebuffed them. They effing act like the victim..They don’t know how to stay in their effing lane,and leave people alone.

Does he want her to be a ghost, she’s already so white.….

No one lighter or darker SHOULD be treated like this. It’s ANOTHER sad case of the European beauty standard of whter is better even for a light-skinned/mixed race woman to bleach her skin. Funny, my Malaysian friend he preferred dark/brown women but married white. Go figure. We are beautiful in different ranges of colors and sizes and thought peocess. We are truly beautiful as is!

How sad! That guy needs someone to sit him down and give him a stern talking to. How could he say something like that. What’s worse is that people do this all the time. It reminds me of that “Rihanna would look better if she was whiter” rubbish and “The whiter the better” nonsense. Can’t people live in peace? I’ve always seen Rihanna’s skin as perfect so I was shocked by that nonsense. Other people’s skin colour is not your business. Sit down somewhere and think about how you can uplift people and encourage them to love themselves rather than spreading self-hate… Read more »

It’s really ridiculous. It’s not just that he told her that she would look prettier if she bleached her skin. The girl he said that to is so light-skinned that if she had listened to him, she would end up looking fully white. So to this dude : If you want a white woman, go find yourself a white woman! No need to encourage a mixed girl to increase her chances for cancer for your sorry ass.