Marie Claire Declares that Curly Hair is a Sign of ‘Wokeness’

According to Marie Claire, Allure, Bustle, and several other glossies with a primarily white readership, curls are the latest and hottest trend of 2016, and were a recommended look for those who attended Coachella last weekend. Here’s an excerpt from Marie Claire’s Curls are having a moment people. Here’s how to make the most of them post a few weeks ago: 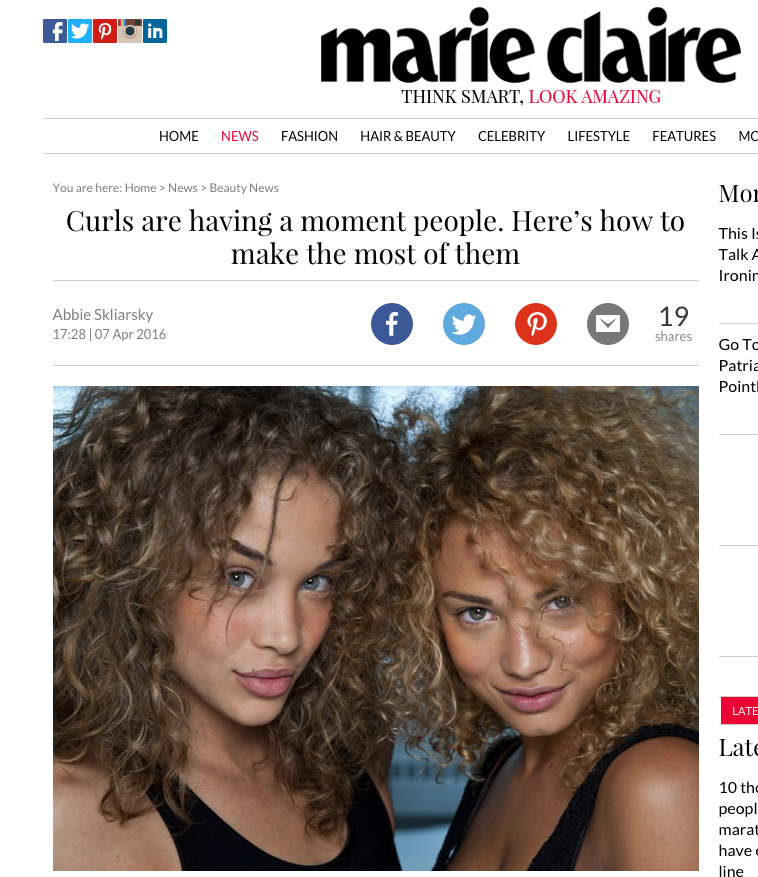 There is something sassy about bouncy, springy curls. All hail our curly haired Queens. Beyonce’s locks have gained admirers over the years, with Yoncé embracing her natural hair and completely owning it. She knows a thing or two about big hair and boy does it show. Did we mention Sarah Jessica Parker’s infamous mane? Her iconic curls are still a talking point to this day.

Ummmm, when exactly did Yonce embrace her natural hair again? Right… her curly lace wigs ARE popping, but she’s been wearing a variety of curly looks for years. As a matter of fact, black women have been wearing their hair curly, coily and kinky — in mass numbers — for at least ten years now, so I think it’s safe to say that WE ushered in this curly hair mainstream acceptance trend. Natural haircare brands with a cross-cultural market base like Carol’s Daughter, Shea Moisture, CURLS, and Mixed Chicks have risen to popularity because of black women’s support — and the numerous companies that have followed suit, creating products specifically for curly hair, have to respect the OG companies who paved the way for them, as well as the OG customer base who made sales a reality. 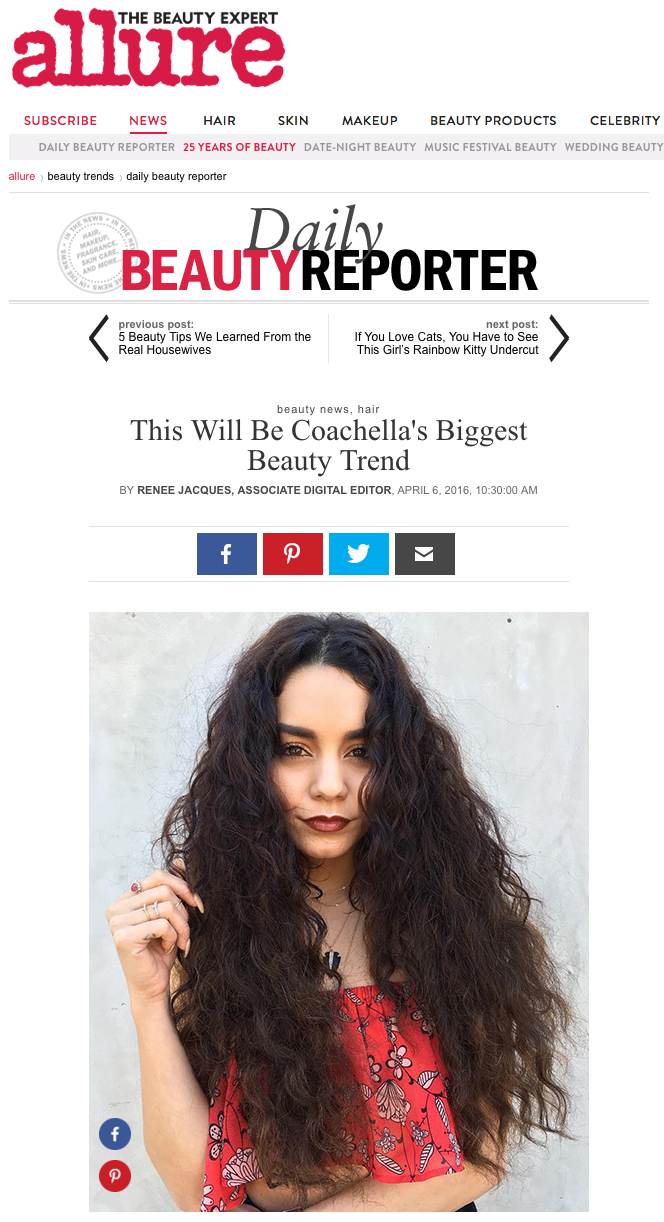 As you can expect, the whole curly is better thing is so hot among white women now that perms — as in chemical treatments that permanently curl one’s hair (not to be confused with a black girl perm aka a relaxer) — are back in style. 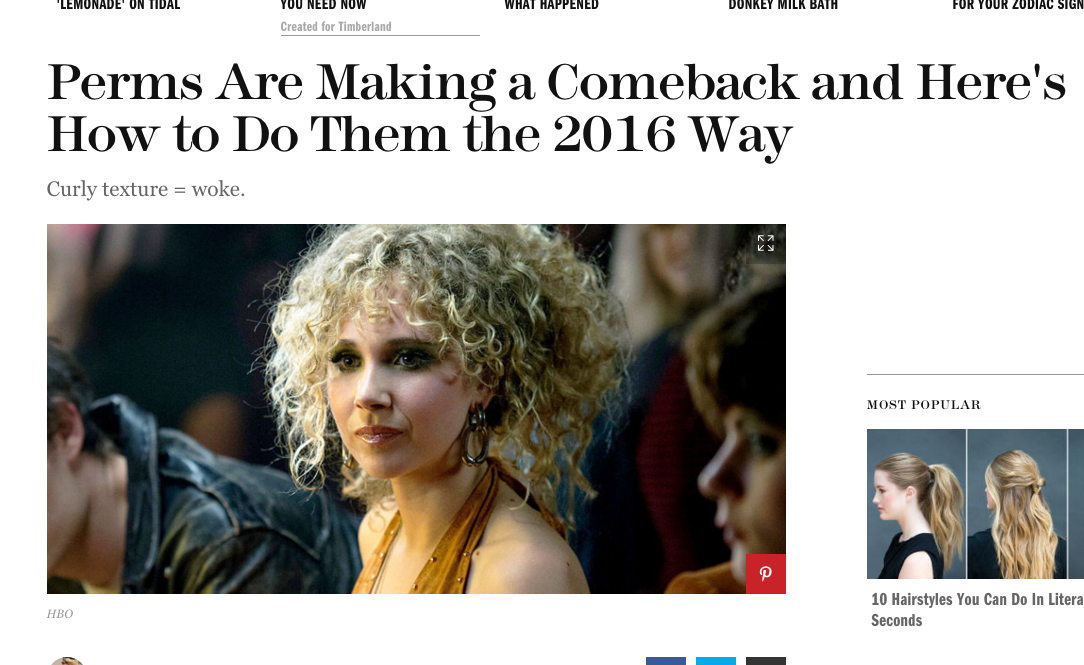 Apparently there’s a list of curly girls of Instagram that we should all be following, and thank God Vashtie and Solange made the list, otherwise we would’ve had to give someone a piece of our mind.

Soundoff! How do you feel about the new uprising trend of curl in mainstream media?

I’ve completely given up on magazines and their “trends” especially when it comes to “trends” that black girls or minorities in general have been rocking for years. I used to read American magazines, but now I read (MAYBE) the UK ver of Cosmo and Glamour.

Do you live in the UK? I only look at magazines when I’m in the supermarket, I only buy Pride or new African woman every other month.

LeShea and I actually live in the Midwest of the US. I rarely buy magazines anymore.

I’m glad they included a few of “us”…we can’t leave it to mainstream to say this is the year of the curl FOR US.…For us naturals, the year of curl is daily for us…we celebrate or should US and our hair daily!

Did they get Beyoncé and Solange confused?? Please pay homage where it is due! Solange has been rocking a fro for ages, now, and how dare the media, once again, not credit Black women–ever the trendsetters–with ALL ladies embracing their curls/hair texture??? I guess they are confused all the way around.

Oh please, find something real to get mad about.

Oh please shut the fuck up.

I used to subscribe to Allure magazine but not really for hair stuff. Why go in on this when there are so called black beauty magazines that largely ignore natural hair. I remember buying a hair issue of Essense and there being hardly any natural photos, styling tips or articles. Over the years I think E has only slightly improved. Honestly The so called black women’s beauty mags are packed with mostly weave and relaxer advice and ads. Sophisticate is a joke for us. I was watching a video on YouTube from the UK and during a forum a magazine… Read more »

I stopped buying those ‘black beauty’ magazines years ago. They’re as misguided and brainwashed as their white counterparts, and with equally money-driven agendas. Sad to see.

The demographic of these magazines are non-black women and/or women with naturally straight hair. Perms have always meant to make one’s hair curly for them. So why are you upset that it has nothing to do with us? Essence and Ebony are catered to us. Now if they had posted an article like this, that would be different and completely understandable. This is just one of those arguments that’s unnecessary. Secondly, the author proved their internal stereotype with what they think black women look like. She stated there were no black women, while the first picture includes Jasmine Sanders, a… Read more »

It’s a valid argument that the only lauded black beauty is that of the non-dark variety. That’s patently obvious. That’s the issue. This is the reality.

Maybe she didn’t know Jasmine was black. I sure didn’t. Simple mistake, yes? Also, while I’m not angry, I do see the author’s point. Curls are having a “moment” b/c of the natural hair movement. White people have noticed and it’s something they find desirable, but know they are left out of. That’s how I see this MC article: “Fellow white ladies, aren’t all those natural hair pictures that you see gorgeous? Well, we can’t do this ourselves because our hair doesn’t grow that way. So, let’s break out the perm to imitate the best we can because we want… Read more »

I think it’s ok. They don’t have to include us, and we don’t have to support these publications by continuing to look for recognition/validation from them. TBH I don’t think it’s necessary to continue to be reminded of the disregard it’s become tiresome. I’d much rather get my inspiration and validation from awesome companies like this one. Let’s pay such publications as much dust as we’ve received. 🙂

It’s been longer than 5 years, sorry…try 15. That’s when I remember seeing a 4b natural wearing an undefined ‘fro in a national commercial. Blogs didn’t start blowing up until about 10 years ago. Before that it was forums, particularly NaturallyCurly and Nappturality (which was created in 2002 in part because of a divide between those NaturallyCurly members who wanted to turn their Afro into something looser and those who thought their Afro was fine the way it was) that promoted embracing natural textured hair. To the topic: I’m a fan of textured hair in general so…yay? 🙂 Also I… Read more »

Let mainstream (read: white) media have their fun with curls and perms. Who cares? We don’t need their validation.

Besides black women who care about their naps+ curls aren’t going to mainstream sources for help, especially when there are literally hundreds of beauty vloggers and other online sources to go to! Stay blessed, sisters <3 <3

Oh for F**K sake. Why is this even an article. Do you not know by now that black woman/blacks have always been the front runner for everything. All the other recessive genes is just wanna be. Am just glad that we are more and more embracing our long over due natural self. Now we just have to focus on dumping the whitewash western religion and get back to our African Spirituality..My beautiful brothers and sisters lets wake each other up from our long overdue slumber.…ASE

My natural kinky curls aren’t having “a moment”. They’re here to stay. My real happy dance will start when the straight blonde weaves go the way of the dinosaur for good…

so is this… the white media’s way of giving us permission to wear our own hair texture?
If so… white media : flicks you off : get yo own sh*t !WHY YOU RIDIN OURS?

Hardly. That would be bad enough. They’ve gone one ‘better’ in not even acknowledging black afro coiled hair at all. To read their magazines — and most mainstream media — you’d be forgiven for thinking that black women didn’t exist on this planet. The only clue? When our culture, features, art, clothing, music et al are shamelessly exploited and hailed as their own. As Ice T once sang back in the day “Just being BLACK is hijacked” (!!)

you aint even tell a single lie

YOU just made my day brighter. lol

How many months will that last? How annoying it is to be looked down on by them when convenient because curls (that are not silky waves) are not European enough and then have curls pushed back into fashion when they decide they can financial exploit it as a trend. Just do you and keep walking.

The UK and US black mags are so far behind it’s embarrassing.

Again… WHY DO WE GIVE A FLYING FUCK ABOUT WHITE PEOPLE!?
We KNOW they always do this foolishness cause they are toddlers in their terrible twos who cannot handle not having the attention on them 24/7/365/etc

So why do we give these damn white people attention? Ignore them and keep doing our thing, they less attention on them the better! GEEZ.

Exactly. The article is poor because I remember perms being trendy for both white men and women back in the 80’s even saw a white girl a couple of years ago with one of those poodle perms. This is fashion for them folks everything has it’s time goes out of fashion and then gets recycled.