I  first caught wind of the relatively new eyebrow tattooing procedure, known as microblading, when actress Meagan Good revealed she had the procedure to correct the appearance of her thin eyebrows. 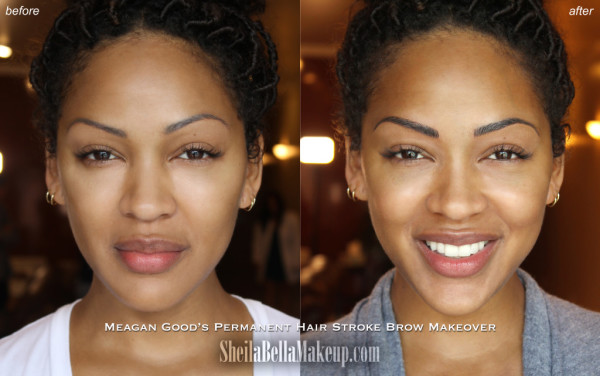 What is Microblading
Wikipedia defines microblading as  “a semi-permanent makeup procedure that allows you to dramatically correct or fully reconstruct lost eyebrow. It was first introduced in Asia…Microblading is performed by manually depositing pigment in the basal layer of the epidermis by a special pen…The blade of microblading pen contains numerous pins that are 3 times thinner than the needles used for tattooing. When performed correctly, the procedure is almost painless.”

I had always been aware of eyebrow tattooing, but hadn’t heard of black women doing it. Besides, I have a tattoo that I got when I was 19 and after more than 10 years, it’s turned a greenish shade. Needless to say, I was a bit skeptical. However, I had the opportunity to meet Massachusetts-based Esthetician and Microblading Expert, Mila Kaluk of The Brow Muse ‚who performed the procedure on me. Having tried every remedy under the sun to regrow my thin brows, this semi-permanent procedure is a Godsend to women like me.

If you’re considering getting this done, I would recommend that you seek out a professional who is accustomed to performing the procedure on ethnic skin. I spoke with Atlanta-based Cosmetic Tattoo Artist, Heidi Carney, who offered some further insight into how her approach is different for women of color,

Ethnic skin heals differently. The pigment tends to blanch out more quickly, so I make sure to  separate the stokes a little father because I know it’s going to blanch out and bleed on darker skin tones. It also tends to cool down and turn a shade or two darker once it really settles into the skin, so it’s important not to go too dark. You can always make it darker and bigger.

Here are a few additional before an after photos of black women who have had the procedure done.

Marie Leggette of the Curvy Fashionista documented her experience here. 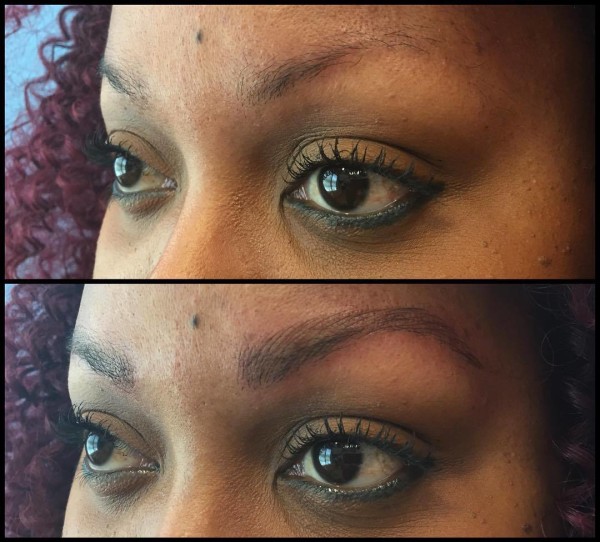 To see the procedure watch this video

I want this done but can’t find anyone in the Baltimore area.

Does anyone knows how to get in touch with Microblading Expert, Mila Kaluk? We have looked but can’t find any information. We are out of town so need to coordinate before hand. Thank you — Jas

I’ve got this procedure done and I absolutely love it. It really beats the hell of out having to get up everyday to draw on your eyebrows. The first few days were torture though, because my eyebrows turned a weird grayish looking color and I wasn’t able to apply makeup until they completely healed.

I’ve been aware of variations of this technique for years. I was put off because of the info on how it can lead to allergy problems afterwards, with increased (permanent) susceptibility and adverse reactions down the line to other dyes. Too scary.

Are eyebrows really that serious? I mean I do mine 98% of the time, but if I don’t feel like it, I’m not going to do it. I’m shocked people are paying almost $1,000 every year for eyebrow makeup…

Unfortunately, after giving birth to my daughter, my eyebrow hair came out completely. I had never had my eyebrows waxed, plucked, or threaded before in my life, because I was fortunate enough to have naturally nicely shaped eyebrows.

Losing my eyebrows was really depressing, because it made me look like an old woman.

I think an eyebrow tattoo is a good possibility to have all days nice brows without taking care of them. For me a microblading is really time saving, because I don’t have to do my brows every morning. When some wants to get a natural looking microblading and is from near Miami, I can recommend Stylish Brows in Miami http://www.stylishbrows.com/

When done correctly by the technician, Microblading can give a person the most beautiful and gorgeous eyebrows that can last two years or even more. Microblading is not cheap, but it’s a time saver and worth the price, imagine, you can wake up in the morning with makeup — Best investment and Godsend.

you are so pretty, for a black girl. – Hello Charmaine

[…] in the mirror with my hair dry and matted to my head, eyebrows looking crazy (recently got them microbladed) and crust in my eyes. But I still managed to tell myself that I was beautiful. More like I forced […]