Annie Nyaga is a 30-year old Kenyan (one of several women) that has become successful through farming in her country.  Over the years, she has parlayed her profits into creating an agribusiness that brings consumers and other young, local farmers together. Nyaga’s success is helping to change the perception of agriculture in Kenya and instill a food-secure country. 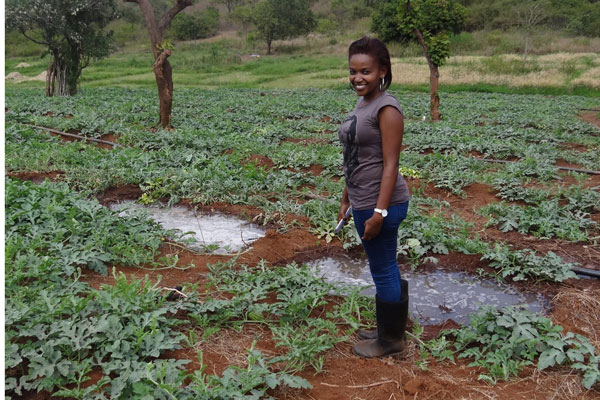 Back in 2009, Nyaga began her agricultural career after turning down a scholarship to obtain a Master’s degree in Biomedical Science and Technology.  She wanted more.  She wanted to farm.

I had a passion for farming. My parents practiced it and I noticed they got good returns … Farming has always taken a special portion of my heart. I don’t feel like I wasted my four years in university since I can apply what I learned in my farm. Farming is a profession like any other and young people should not view it as a side hussle. They should be ready to soil their hands if they want to prosper in farming.  — Nyaga tells Bizna Kenya

It was not a lucrative business that just fell into Nyaga’s lap, either.  She started with baby corn and French beans but was unsuccessful due to the low demand.  However, Nyaga persevered and switched to farming watermelons.  This adjustment was when her business started to flourish.

Considering the availability of water in the region, cheap labour and adequate climate, I settled on watermelon since it requires a lot of water and sunlight. Nyaga tells Bizna Kenya

From there, she invested in an irrigation system and staff to help with crops.  She also started a company, Farm2Home, to help connect other young farmers with consumers.  Additionally, she is a founding director of 4‑H Foundation Kenya, which is geared towards changing the youth’s drab perception of farming.

In 2015, Nyaga made a net profit of 600,000 Kenyan shillings (nearly 6000 US dollars) in three months from harvests alone.  Combined with her company, her overall business is reaching millions in Kenyan shillings.

Does Nyaga’s story inspire you?

You can do it.…Write it down and plan.

Thanks love. Saving up every cent I can get my hands on right now.

I admire anyone who can successfully reap food from the earth. Good on her!

does her story inspire me? iIs my ultimate African dream. a huge self sustaining farm complete with orchards, vineyards, shea trees and herds of cattle and other livestock right in my village with my people. unfortunately #bringbacktheland isn’t very high on South African Government priorities. but a girl can still dream right?