Not everyone is drinking the lemonade. While much of the world is hailing Beyonce’s latest album, Lemonade, a masterpiece, Rapper Azealia Banks is calling it the “antithesis of feminism.”

In a series of tweets, Banks called out Beyonce for reinforcing what she called, “the heartbroken black female narrative.”

If you haven’t yet heard or seen Lemonade let me grant you a brief and literal synopsis. Almost every song leads with Beyonce reciting passages from Warsaw Shire’s poetry. Then we’re taken into 13 songs that, on the surface, are about Jay-z’s infidelity and Beyonce’s hurt feelings. In the end, Beyonce seemingly makes peace with whatever happened between them and they reconcile. I know that description probably isn’t going to make you want to watch/listen to the album, but you should. It’s more complex than what I’ve described.

Complex or not, Banks isn’t here for it. 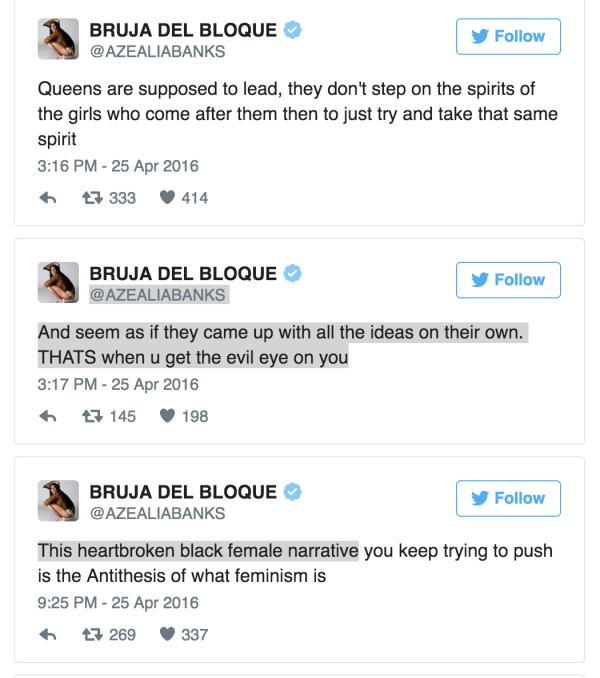 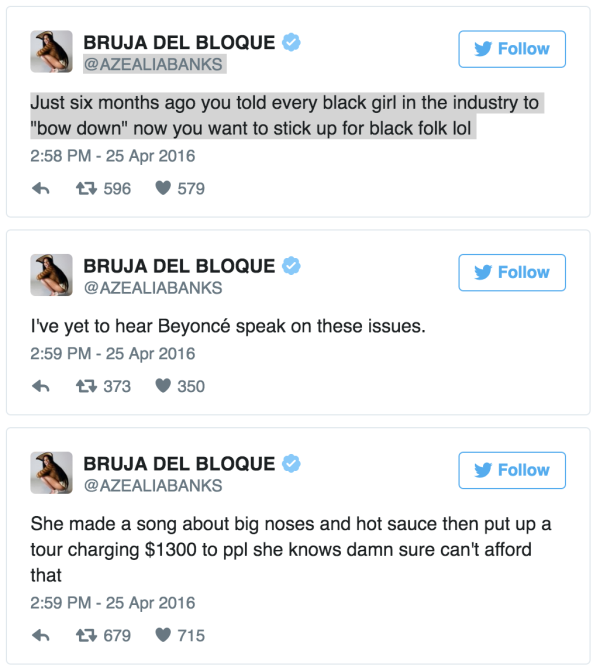 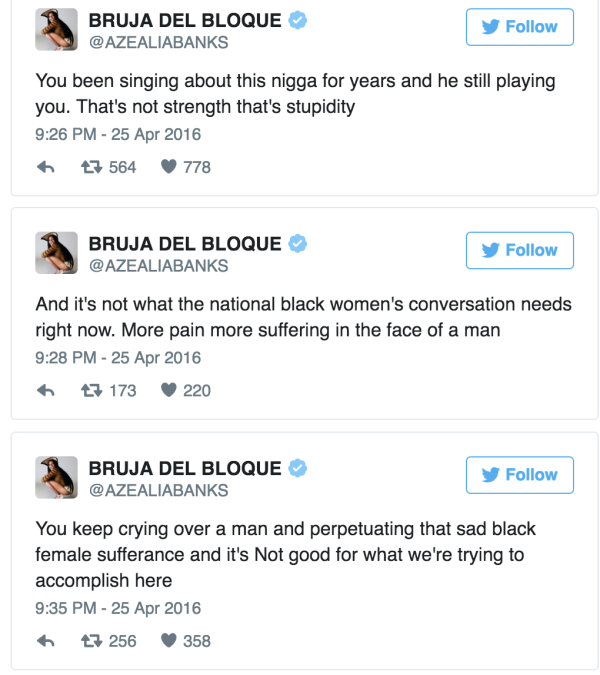 Banks isn’t alone in her criticism of the album. Conservative blogger, Matt Walsh, shared these thoughts:

…“Beyonce” is more a brand than a person. The lady herself is a person, but what’s presented to the world is a carefully constructed and marketed product. It’s a narrative, a story, a walking and talking fantasy novel for girls. I don’t know how much of the final manuscript is Beyonce’s brainchild and how much comes from the team of people around her, but rest assured that everything we see is manufactured. This, after all, is a woman who hired a “visual director” to follow her around and document and stylize her every move.

The skepticism shared by both Banks and Walsh is fair. Beyonce’s transformation has come a bit too quickly for some. After all, she’s the same person who sang Cater to You, and likewise Jay-z’s  to reference Tina Turner’s brutal beating with the lines, “Eat the Cake Anna Mae,” in her song “Drunk in Love.” Moreover, she isn’t the first person to laud feminism, so why is Beyonce seemingly getting all the credit for bringing it to the forefront?

What are your thoughts? Sound off below!

Beyonce followed the natural movement NOT the over way round. Though the mainstream media is now declaring she’s empowering everyday black women, ladies let’s get information: We allowed her to wear her natural hair when we started stepping out every day proud of our own. By reclaiming our wholeness we are changing the narrative. Pat yourselves on the back ladies #blackgirlmagic

Not sure how straight blond hair can be deemed natural Afro hair, to me it’s the very antithesis.

Me personally I will not judge what goes on between Beyonce and Jay‑Z because that’she not my relationship and I don’t know the whole story behind it. What I do know is that as a women I will not tolerate cheating at all. If my man was to cheat on me there’should nothing going he or anyone else say to justify it or make me want to stay. Cheating (regardless of who he cheats with ) tell me that you have no respect for me, our family, or our relationship. I’very always said to my man that if he ever… Read more »

i wish i could like your comment 1 BILLION TIMES… AMEN, AMEN & AMEN!!!! TO EVERYTHING YOU SAID. personally i will NEVER tolerate cheating because i equate it to trying to kill me. STDs are real. i’ve seen women die from STDs given to them by their husbands. i loved lemonade with regards to the black female unity and sisterhood part but i think it is very stupid to stay with a man that constantly disrespects you.

First, Azealia who? Banks, so Tyra Banks? Second, a true queen doesn’t diss or come at another queen on a public form so at least we know this chick is clueless and thus need bow down. Furthermore, apparent by the lack of comments makes certain she is a ‘non-factor.’ And lastly, everyone knows this chick, AZ, is one angry black woman, mentally unstable in all her ways. Like what does she know about the sanctity of marriage? Having become just another side chick graduating to baby’s mama, of course she would defend her own, concubines and wifey wannabees. Side chicks and those… Read more »

Thank you and that whole bow down b******es.…She was talking about EVERYBODY (male or female)‘that always has something negative to say about her or anyone…I guess it’s so normalized for Black males to call Black women bitches in popular culture that some Black women when they hear the word thinks someone is calling their name.….and isn’t funny how Black women always bring up that line but have nothing to say about the numerous rappers and regular dudes who are talking about Black women when they use that word?.…Anyhow, they need to get a life.….As for that ‘conservative’.…lol.…he’s talking as if… Read more »

I read Matt Walsh’s columns and I have long since noted that he has serious issues with Black women and girls. He felt that it was justifiable for the cop to throw the bikini-clad girl to the ground and sit on her and he also thought that it was appropriate for the school cop to toss a grieving child across a classroom. Apparently someone has not been reading his pieces for long. I believe that it was a mistake on your part to use him here. Just my 2 cents.

She has a right to express herself musically. Most women can identify with the songs. We MUST take it with a grain of salt.…and move on.

Pretend feminist if anything.
What a troll! Female, BE gone!

Amen Azalea! Now mind you I am not a fan of either woman but in this Azalea has a point. I am so sick and tired of Beyonce perpetuating this nonsense that black women are these hopeless people whose existence and happiness is predicated upon how other people perceive us. This ‘becky with the good hair’ is an embarrassing piece of self hating slave talk that is being blared out to the world that we see ourselves as inferior on account of the hair we were born with. She and Ciara’s famous lament of the other woman’s ‘silicon ass and… Read more »

I am so done with AB. I’ve never seen someone so ready to attack fellow black artists and always with the angry black female mode that she exudes ALL THE TIME. But that’s none of my business tho.

I don’t fully buy these kinds of critiques of Beyonce, simply because I don’t see what makes her approach to her public image and music that different from the rest of the pop stars–particularly white pop stars–who hire plenty of creative support, image trendmakers, etc., to help them rake in fans, awards, and dough. What makes Beyonce relying on these same resources–and doing it so well–such a crime against humanity? Sounds like the same old haterade for black women enjoying themselves and doing it well. Can a black woman succeed without these triple standards?

(Sorry for my english i’m a french black women). I’m not a fan of beyonce or even Hip Hop , RNB , rap and all that stuff but i’m done with all the critics. For me lemonade portrayed what women and specifically what black women are going through. Lemonade make me feel good because even if i’m not american , i must admit taht when it’s about black women , the society and the media take for exemple a smal group of ratchet , angry black women in America to talk about all the black women living on Earth. In… Read more »

I don’t know why seeing a Black women like Beyonce as a complex human being who hurts and makes mistakes is so threatening to America. Perhaps people are afraid that if they see Black women as human beings they’ll have to start treating them as such…

I canNOT believe I am actually saying this( I think a pig just flew past my window lol) but AB is so right on. All we and others around us are seeing is the “black woman struggle” over and over and over all while we are trying to overcome how the world see us. When is it ok to continue to stay with a man who CONSTANTLY disrespects you?( whether it’s about Jay or not… doesn’t matter) We as a culture have soooo much going on and this type of music is starting to be a black women’s anthem. Meanwhile…as… Read more »

True!! Banks act a fool some times but she know feminist. Actually I wish beyonce to be more consistent and explain like matt mcGorry did to iggy about the term ‘becky’.…wishes…

The only person telling a “heartbroken black female narrative” is Azealia Banks. She talks about “queen” ish. Real queens don’t sit on social media every day blaming everyone else for their problems. Real queens dust it off, keep it moving, and scale greater heights.

I’m a black women and feminist but I honestly don’t get the hype/praise about Lemonade. I only watched the intro video and I’ve tried, believe me, I’ve tried to see the depth but I keep splashing in puddles.
I too see Beyonce as more of a brand than a product, so in that light, and because I know I’m not in her target market, I find it difficult to get that excited about what anything she does.

Finally someone who gets it. Beyonce is such a poser trying to capitalize on this whole “woke” trend. Like because now she’s perpetuating theculture she’s suddenly validating blackness, talking about she likes nappy hair, negros noses and Jackson 5 nostrils, and wants to rock a few Culturally inspired hairstyles. Girl please. How many nose jobs, skin lightening sessions, photoshop lightening filters, and Becky weaves did homegirl rock before she decided blackness was fierce? But her idea is wailing over unfaithful men? We get so mad at white people hoping on our culture like some cool trend when what they admire… Read more »

lis
Reply to  Naturally me