Why she thought this was a good idea, we’ll never know, but 37-year-old white-Jewish comedian Julie Klausner blasted 19-year-old Zendaya Coleman’s weight in a series of tweets, saying she had starved herself down to the size of one of Giuliana Rancic’s elbows. 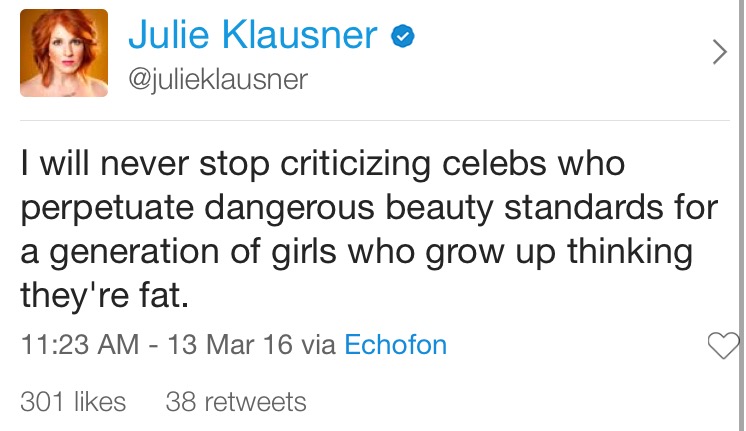 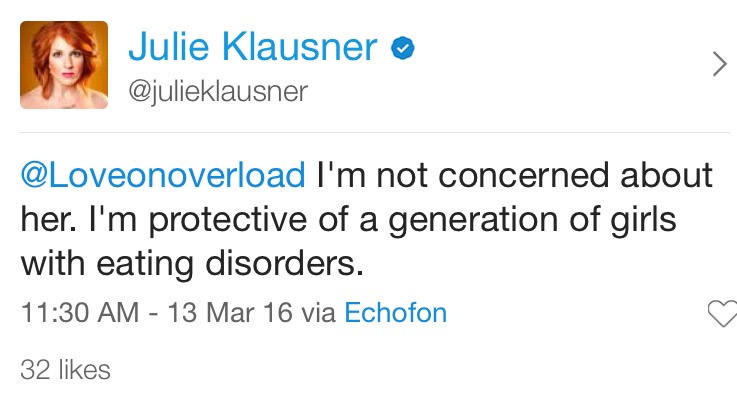 All of this was prompted by Zendaya’s weekend appearance at the Nickelodeon Kid’s Choice Awards. The young actress, who won favorite female TV star, wore a spaghetti strapped dress that showed off her naturally thin figure.

Zendaya responded swiftly on Twitter with a message of body-positivity; 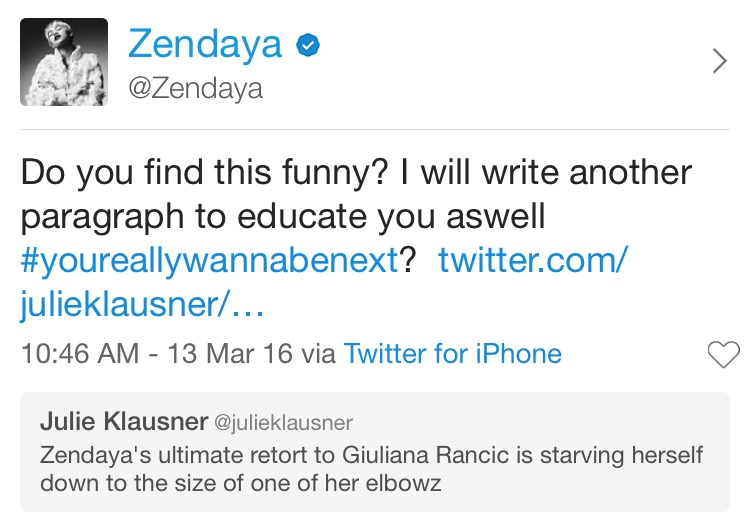 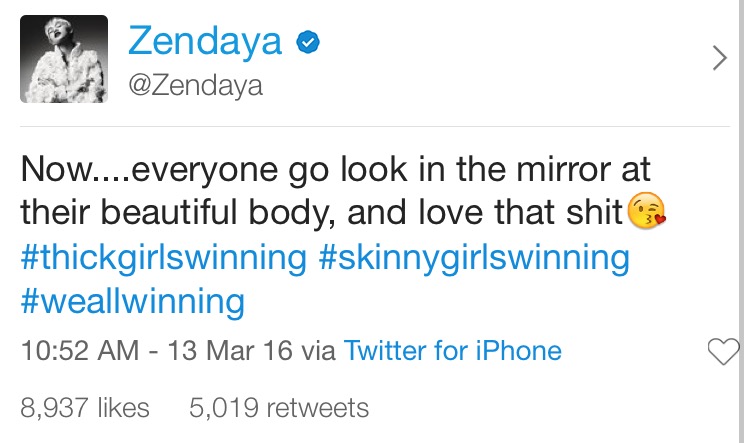 Klausner’s criticism of Zendaya is twisted for sooooo many reasons.

First off, the ‘bony is beautiful’ movement was not born out of African American culture and is not perpetuated by it. And this is not to dismiss the many African American women who do struggle with eating orders, particularly bulimia. But, on a macro scale, the pursuit of bony hips and collarbone is a dangerous white beauty standard that associates extreme skinniness with attractiveness.

Does Zendaya benefit from Hollywood’s favoring of slender women? Certainly! But Hollywood is itself shaped by white folks. Klausner would do well to turn the lens inward and begin a dialogue within her own culture.

Second, Zendaya has been vocal about the danger of unhealthy beauty standards.

Back in October, she chose to speak out after discovering a magazine had photoshopped her already-thin frame to be even slimmer. She posted the following photo to her Instagram page with the caption;

“Had a new shoot come out today and was shocked when I found my 19 year old hips and torso quite manipulated. These are the things that make women self conscious, that create the unrealistic ideals of beauty that we have. Anyone who knows who I am knows I stand for honest and pure self love. So I took it upon myself to release the real pic (right side) and I love it Thank you @modelistemagazine for pulling down the images and fixing this retouch issue.” 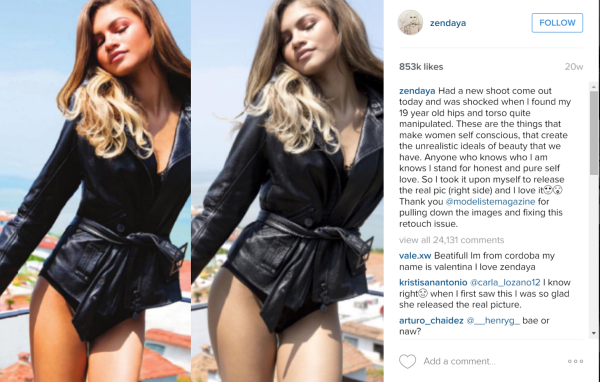 She also spoke out last year when critics called her father ugly.

“Nobody’s ugly! That doesn’t exist. I say, take the time to get to know who you are. Take the time to love yourself, and everything will be alright.”

Third, it is obvious that Zendaya is a naturally tall and slender woman! She has been in the public eye since 2010 when she was cast in the Disney series Shake it Up and her figure hasn’t changed much since then. She is 5 foot 10 and just naturally shaped like a runway model.

Finally, this is not the first time that Klausner has trolled a prominent black woman. The pilot episode of her Hulu show Difficult People centers on a joke about Blue Ivy being peed on by R. Kelly. Ugh.

Zendaya’s fans gave Klausner an education on Twitter and the comedian, though defiant, did say that she would proceed with more caution in the future. 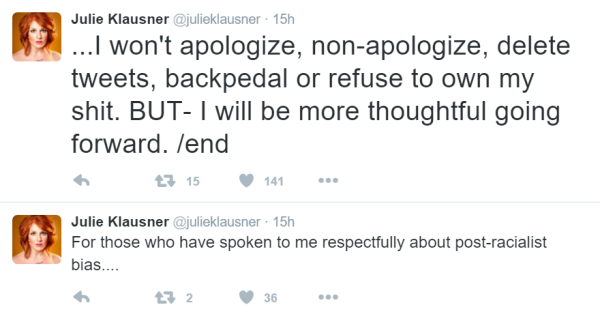 And let’s hope she does, because this was not a good look.

Let’s pray for Julie. She has a lot to issues to work out.

BLACK, but you may be right. Halle Berry and President Obama are biracial and THEY consider themselves BLACK….especially Halle Berry, her WHITE mother told her when she was a CHILD this country will see you as BLACK….the twins Tamara and Tia are biracial and their BLACK mother told the the same thing….so it really depends on how the children are being raised…maybe some wont have any identity issues…according to you Zendaya is not BLACK

As a 22 year old white Jewish young woman, fuck you. Fuck you for saying that being 37 and Jewish and white is a bad thing. Because that’s me. And you know what? I’m rooting for whoever wrote this piece of shit article – if the only publication you can write for is this one, it is my hope that you stop with the racist bullshit and focus on bettering your career with more thoughtful pieces. Thx! (Also. Had 2 friends in high school who starved themselves. The collarbones, breastbone, and jaws looked exactly like Zendaya’s. Being that thin is,… Read more »

You saw the title of the site. The question is why are you here? Also, it’s always cute when white women blame Black women for issues like this like as if it wasn’t white culture and society who promoted (and still promotes) unhealthy standards of beauty. ‘Course, if this Julie nobody would have gone after Hollywood she still would’ve been praised for being feminist because the bar is so low these days and she could also get away with ignoring the concerns of Black women, women of color, and pretty much anyone who isn’t straight, cis, and upper class like… Read more »

PadThai2: Um, this site used to be about black hair and issues related to that. Actually, it used to be only about black women’s hair. I remember when a few folks left angry comments on articles that dared to discuss black men’s hair. Anyway, only within the last year or two has this site expanded to topics other than hair. I’m a black woman and I don’t understand why this article was twisted into a white vs. black thing either. The issue isn’t about a white woman attacking a black woman’s looks. It’s about a woman attacking another woman’s weight.… Read more »

Zendaya is grace personified, as usual.

Though, honestly, Klausers’ response is one of the better ones I’ve seen for these kinds of situations. I wish more people would just say ‘I’ll own up to my crap and move forward with this new knowledge’; it probably won’t help the image of someone who can make sex jokes about toddlers, but it’s nice to see.

I hate the double standard when it comes to women bodies. My whole life i’ve been tall and slim. i was so insecure growing up because of people telling me i look anorexic and i need to eat and how i should come to their house so they could feed me. it was horrifying. And for some strange reason its okay for people to say that to slim/ slender woman but if a slim/slender woman told a bigger woman to eat a salad or lose weight all hell would break loose.. its not fair. i remember in high school i… Read more »

Yeah, I totally agree with your point. I do think part of it stems from envy, especially when ‘bigger’ women who are constantly criticised for their weight hence, they criticise slimmer women to make themselves feel better. You know, like a bully that bullies others because they were bullied before. However, the criticism does comes from both sides. I know slim women that insult bigger women so part of it comes from insecurity & jelousy. Don’t feel ashamed about your body hon, being slim is beautiful!!! 🙂 xx

I understand all too well. I’m naturally slim (size 6) but as a young teen was as little as a size 2…even though I ate everything in sight. Just genes. I was so self-conscious of my size as I was told that Black women should always be curvy with plenty of T and A. I had neither then but have filled out since then…still slim (127lbs) but not skinny. Thankfully, I grew out of that destructive mind-set as it affected my self-esteem and confidence till I hit 21 and realized that ALL of my curvy friends were on one diet… Read more »

I don’t understand why some individuals think that those that are slim are forcing themselves to be or suffer from some kind of eating disorder. There is something called “naturally” slim. I think this woman appeared quite bitter and that is very sad. Stop with the body-shaming and embrace ALL sizes.

Thank YOU!! I knew I wasn’t crazy. and @padthai2:disqus , now now, no need for the smart comments 😉 . This was a woman to woman issue, not a black vs. white issue. That’s all I was saying

I love Donald Trump, but other than that, I agree with what you said.

I’ve never heard of Julie Klausner before today, but she sounds really self-righteous and frankly insufferable, just from looking at her Twitter.

Are we jealous and mad Julie Klausner???

Wow. This has literally NOTHING to do with race.

Come, let’s not paint people with the same brush. Not all white women have something against black women so let’s not pit them against each other 🙂

very well-written article and response by both you, the writer, as well as Zendaya. This Klausner woman clearly enjoys attacking children/young adults

I just don’t understand why everything on this website is turned into a race issue… That does nothing but stir up unnecessary contempt.

Zendaya doesn’t even look unnaturally skinny. I’m glad you guys put the time she blasted a magazine for making her look smaller because no matter what someone can say about her only being seen as beautiful because she’s thin and light skinned, she has always been body positive and proud of ALL types of Black women.

This Klausner chick is so dumb. She should cut Zendaya a check for finally getting the media attention she desperately needed.

Thank you social media for making it once again about race!!who cares what color either of the girls skin is..smh..stuff like this and ppl like donald trump and all the other ignorant people is what keeps us segregated!and has our country in a uproar!

I never saw it as ethnic issue.I see it as this- Why hasn’t She attacked Kylie Jenner? This is a young girl that does nothing but take pictures. This is young girl that hated herself so bad that at her young age( with very impressionable teens following her) had tons of surgery to look like her sister(pornstar). Why hasn’t She spoken on that? How is that healthy? Kylie does nothing and brings nothing to the table for young ppl. Heck is it because she is white? After twiggy hit the scene it was a wrap for average size women. Let’s… Read more »

I love how Zendaya is always ready to serve it to a losser with a fabulous, tasteful clap back that ends the conversation. Kudos baby girl.

True! We are ALL beautiful no matter the size. Some people are naturally thin and have a high metabolism. It’s all ABOUT Self-love and self-acceptance.

You know what, I’m not a journalist so I might know much about how they should write but I’m pretty darn sure that there’s a lot wrong with this article starting with the title. Was it really necessary to bring in the race of this Internet troll? Does the fact that she is a white woman bring in any significance in this story or even make the fact that she says horrible things better/worse ? Just because a white woman is atacking a black one DOES NOT make it a race issue and we need to stop making random stuff… Read more »

You are absolutely correct. This really has nothing to do with race. Self esteem knows no color. Zendaya appears to be naturally thin. She is gorgeous and shouldn’t have to apologize for it. But Ashley Graham is too and she’s my hero. We don’t need to go to extremes with being too thin or too heavy but accept people for their character. Don;t make size the new prejudice.