Twitter erupted last week when comedian Corey Holcomb took to his account to continue his seemingly never-ending hate-fueled rant against women, particularly plus-sized women. This time the subject of his tweet was blogger Chasity Garner of GarnerStyle. 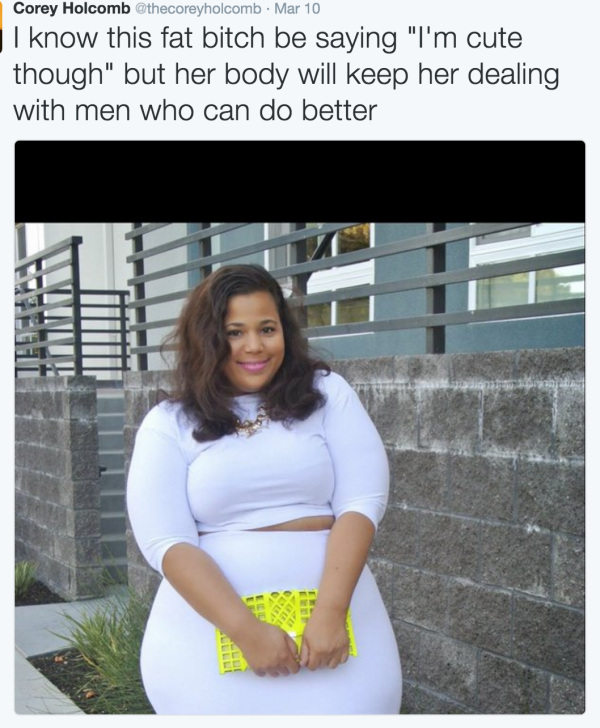 Garner, whose blog has been featured on Oprah.com, the New York Times, and Elle Magazine, has followers who number in the hundreds of thousands. She is also happily married. Her followers were quick to both alert her to the meme and jump to her defense. They flooded Holcomb’s timeline with questions about what he called, “a joke.” 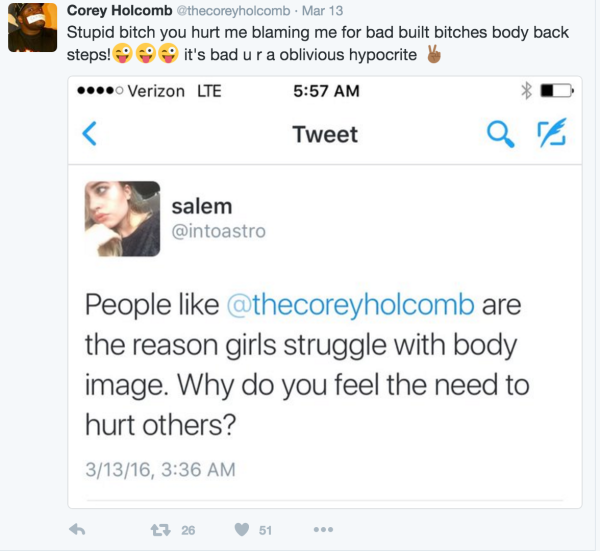 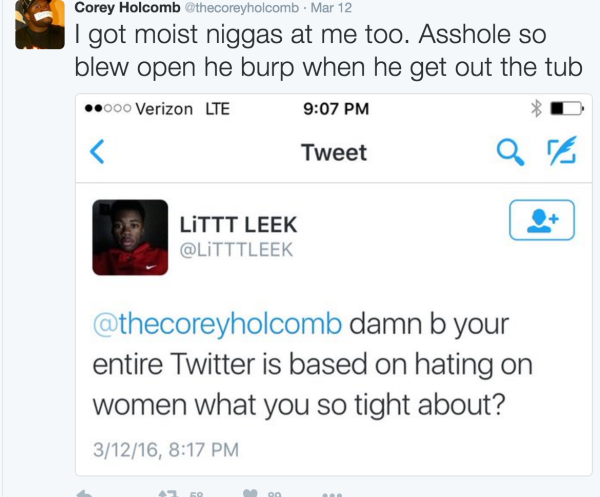 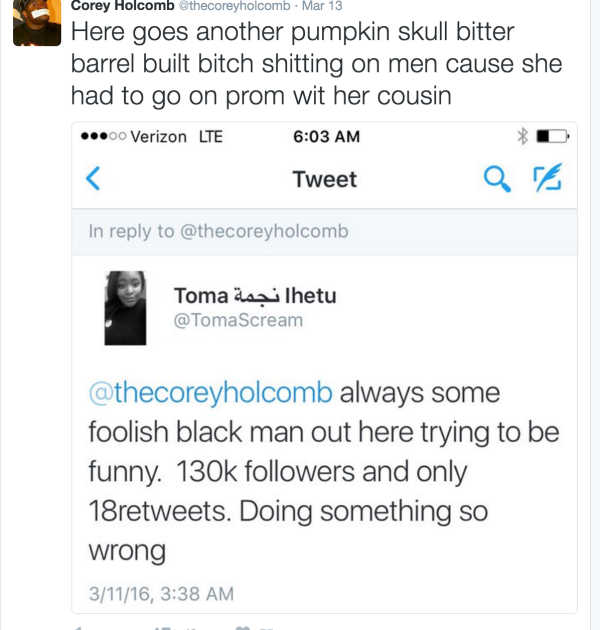 Perhaps the best response to Holcomb’s tweet came from Garner herself: 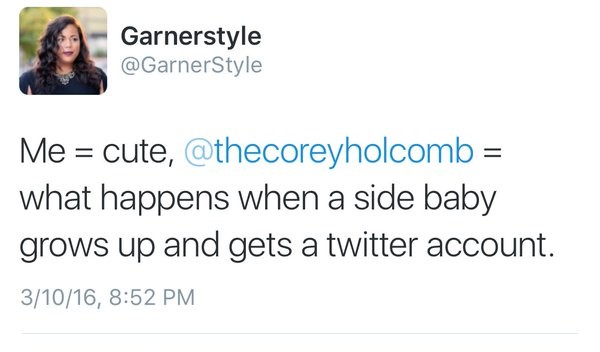 For Garner, however, the “fat joke” was perhaps the least offensive part of Holcomb’s tweet. “I’ve been fat my whole life. I’ve legit laughed at some jokes about me before, ” she says. “This just wasn’t even funny”.  More than anything, she is disappointed that these are the kinds of messages black men are sending out about black women.

“If anything happens to a black man I’ll retweet and call attention to it. Aren’t we all supposed to be supportive of each other? The bitch part is really got me like wait a minute.…You don’t even know me like that to call me out my name. At the end of the day when you call out a woman, an individual, and a black woman at that…it’s just nasty all the way around.”

Garner felt it was important to draw some attention to Holcomb’s tweet because it makes it known that these kinds of attitudes still do exist. With such a large platform, it was also important to let her fans know that her feathers aren’t easily ruffled.

“I’m just very strong in who I am. It’s all about starting the conversation…At the end of the day, you can’t let someone else tell you how to feel about yourself. We have so much control over our feelings. self esteem is something that you have to practice on a daily basis.…It’s not all on what you look like on the outer. Women are powerful. They have amazing careers. They just show up everyday for themselves and everyone else.…There are so many other things to be confidence in, not just your looks. All of these things make women such dynamic human beings. ”

Corey Holcomb is the epitome of the guy you curve and then he says “that’s why you ugly anyway.” I swear a beautiful curvy girl hurt his little feelings somewhere down the road.

This 100% Guys like him are the ones who follow that Tommy Sotomayor guy. And its funny, because if that’s him on his picture, it doesn’t look like he’s sporting even a 2 pack on his abs but wants to put someone else, especially a Black woman, down for being bigger?? He can have several seats.

Oh please..Tommy Sotomayor doesn’t make up the things he says about fellow black people, they perpetuate their own stereotypes..but I do agree with you about Corey, he has no room to talk!

Meanwhile black people continue to behave in ways that are anitblack and misogynistic.Lol miss me with that foolishness! Take responsibility for your actions and stop being mad at black people who call you out! Get your head out of the sand and open your eyes.

Meanwhile black people continue to behave in ways that are anitblack and misogynistic.Lol miss me with that foolishness! Take responsibility for your actions and stop being mad at black people who call you out! Get your head out of the sand and open your eyes.

Meanwhile black people continue to behave in ways that are anitblack and misogynistic.Lol miss me with that foolishness! Take responsibility for your actions and stop being mad at black people who call you out! Get your head out of the sand and open your eyes. And of course my comment will be deleted, I guess only certain parties deserve free speech!

Your dumb comment should be deleted. Actions? Called out? This woman did nothing to this dude or negative. He’s just a loser who’s always looking to get a laugh at the expense of black women. Nothing more. Nothing less. He just wanted a punchline and used this woman. Stop propping these dudes up to be revolutionaries. They are even more stereotypical than the women they put down. Baby daddies, don’t want to pay child support for their kids, trashy looking, promotes a culture of violence and disrespect. Yet, you believe this woman shouldn’t defend herself because her “actions” led to… Read more »

Tommy Sotomayor is a self hating, Black woman bashing piece of trash. Sorry to break it to you. He’s particularly hateful of Black women, especially if they’re dark skinned. He literally uses the term “Black beasties” to refer to Black women while calling White women “Beautiful Snow Bunnies”.

He is not above saying things that are over exaggerations or at times out right lies. He doesn’t do much to check his facts for his “in the news” maybe because with his kind of fan base he doesn’t need to. Example I saw a video he did on a story about a man slapping a black baby on a plane for crying. Tommy went in on how the mother must of been black because black women love to be white men bed wenches and would let them do this their children. I watch a lot of news and had… Read more »

Don’t forget about the story that he made up about the woman “twerking in church”. It was crazy because the black men that subscribe to him took off with that mess. The woman was actually fully dressed dancing in a strip club. No one had the good sense to actually pay attention to the woman’s surroundings. No pews, just chairs circled around tables and wall to wall mirrors. A strip club. They are such sheep that they will believe anything he says because anyone who gets all their news from WSHH is sooo credible. Then he goes and only invites… Read more »

Tommy Sotomayor is the stereotype:

A baby daddy–check!
Behind on his child support–check!
Chase bottom of the barrel NBW–check!
Raised by a single mom–check!
BM full of self-hate-check!
Uses BW as a scapegoat for his failure in life–check!

This is why Chasity is and always will be the awesome person she is! Petty folks like Corey always get mad when they see a confident woman living and loving her life. It makes their own shortcomings all too apparent.

There is a pot for every lid. She is very beautiful!!!

Hmm, wonder if he’s related to that Tommy Sotomayer twit.

He’s just awful! I didn’t know he was married to a white woman at first, I think he does that to make her feel better. She must lack character too because she allows him to bash people. I said that because I’ve been around black men( in stores) that date or are married to white women and they speak really loud letting her know how pretty they are. I’m like wow..what a wonderful way to let black women know she feels some type of way. Like you clearly see that is what it’s all about about.

That man is clearly butt hurt and bitter about women..I can’t imagine shaming someone in that manner! But fat or not maybe that outfit isnt a good choice,she’s a pretty girl though!

I didn’t take her comment to mean children born out of wedlock. I think she was implying his mother was the side chick, and possibly the main woman was curvy and he’s mad about it. I really don’t think she was talking about marital status at all.

“Side-babies” mothers are “side-chicks.” I don’t see a way around that. Chastity is implying that Corey is the disgruntled product of such an arrangement.

Born out of wedlock children and “side chick babies” are two different things.

She was right to call him out. He doesn’t even know her and yet calling her a b&$@T. If you call someone a bitch it should be for personality not as a synonym for woman. Then I see all these black men on the Internet complaining that black women have the stink attitudes. And since he put it out there to talk about people’s looks I think he’s ugly as sin in the face. I know I can do better.

But Corey Holcomb is fat himself so I don’t know where he gets off talking about someone else. His whole timeline is hateful towards women. The very fact that someone as misogynistic as him can acting gigs just shows how much misogyny is applauded in the Black community.

I agree with the first sentence, but where we disagree is that the marital status of the parents is what Chastity was focusing on. A child can be conceived from a “side” relationship while those in the “main” relationship aren’t married either so I don’t see why that conclusion was jumped to. All children born out of wedlock are not “side babies” and all “side babies” are not born out of wedlock. There are couples that started out as a side thing who get married after conceiving children. So I just don’t think the two are mutually exclusive and I… Read more »

Lol! You are so lost it’s downright hysterical!!!

What is he said to her horrible and completely unnecessary and not to mention untrue. She is lovely. But her side baby comment was just as tacky. Let’s not continue to perpetuate the stereotype that children born out of wedlock grow up to be dysfunctional.

And Corey looks any better?? Boy if you don’t get

Wow, his comment was just nasty. And she’s absolutely beautiful, both in appearance and the way she articulated her response. It would be nice to see a day where we can uplift each other instead of bringing each other down.

Hateful people live hateful lives. This man is so sad.

First, I had to look him up to find out who this Clown was! second, he’s showing just how common a comedian he is with no real talent or depth because he Stoops to making fun of everybody in order to get a laugh. he’s thirsty for attention and it shows. he’s pandering to a small percentage of people who think calling a woman a fat b**** that you don’t know to get a laugh is called “comedy”. he’s disrespectful, he has NO talent and he will soon Fade Into Oblivion. he will never rise to the heights of truly great comedians… Read more »

if we do our research wella, the dude in-question may be an ugly wreck with critically low self-esteem.

I actually don’t hold people like this “comedian” accountable anymore because we can’t control someone else. I hold Twitter accountable; I’ll explain why in a minute. As for this guy, Black women shouldn’t hinge their self-esteem and hopes for change on someone who peppers their unfunny jokes with profanity and grammatical errors. These low-opinion, low IQ guys are like weeds, tell one off and three more grow in their place and make similar horrible comments like this or worse. It’s likely that Corey or others like him or not going to change their views or look at heavy women differently… Read more »