Karrine Steffans: ‘We Erase The Sexual Trauma From Our Recollections of Oprah and Maya Angelou’

For a long time black pop culture has determined that women labeled ‘hoes’ should be seen and not heard or allowed to define their own experiences. But that is changing, as women like Amber Rose, Blac Chyna and Cardi B are push against the ‘hoe’ label and point out society’s extreme double standards for men and women.

Video model Karrine Steffans joined the chorus when she challenged a woman who, comparing her to Oprah, called Steffans “tasteless” and someone she did not want to be. Steffans took the opportunity to challenge the woman in a series of tweets;

“Oprah was promiscuous. Maya Angelou was a prostitute. A woman’s sexual organs, their functions or reputation will never define or stop her. You revere great women but give no credit to their sexual traumas and repercussions for making them stronger, better, wiser women. Believing a woman worthy of praise has never had a sexual or ill reputed past is silly. So many great women have had horrible reputations. Take a long, hard look at our strong, honorable black women and see how their sex plays a part in their stories.”

Oprah has spoken before about being raped at age 9 by a 19-year-old cousin, and giving birth to a baby boy at 14 who died soon after childbirth. And in her memoir, Gather Together in My Name, Angelou writes about working as a prostitute and madam;

“The faces, bodies and smells of the tricks made an unending paisley pattern in my mind. Except for the Tamiroffish first customer, the others had no individual characteristics.”

This is why the division of black women into ‘respectable’ and ‘hoe’ is a false one. Our experiences — with love, with sex, with abuse — are multi-layered and we deserve the space to work through them without being subjected to derogatory labels.

Check out Steffans’ tweets below; 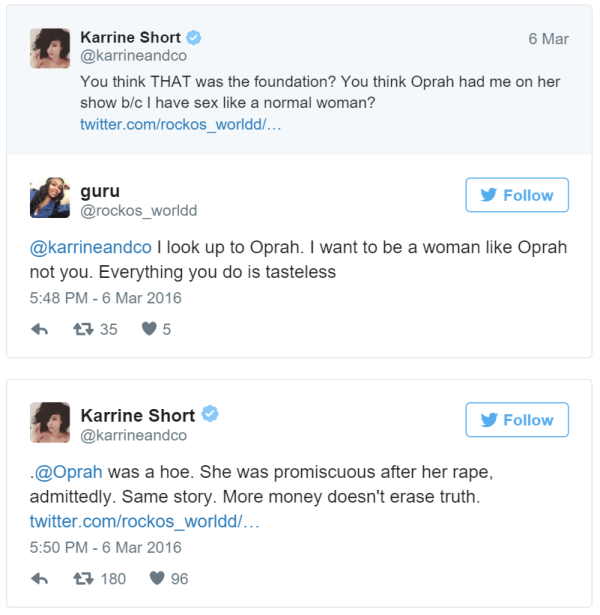 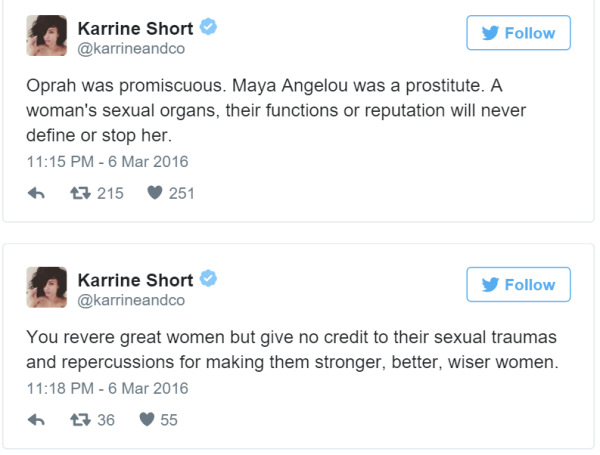 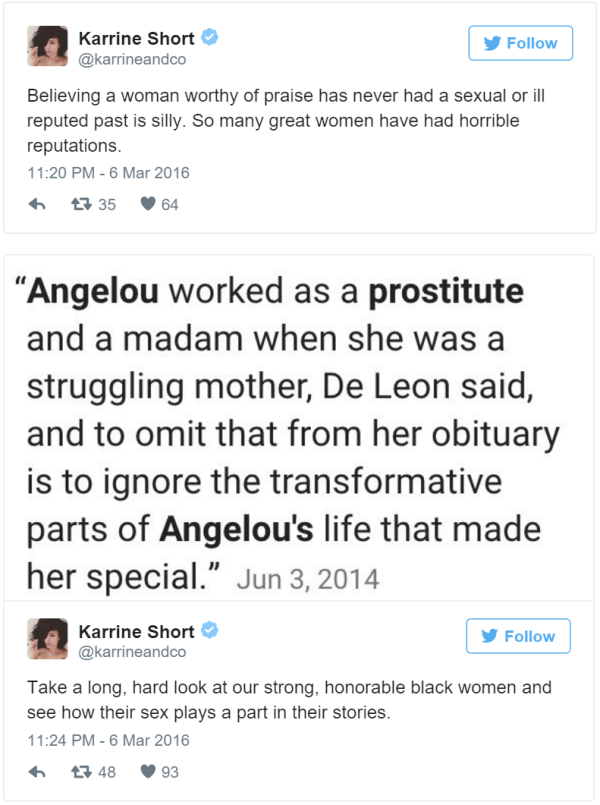 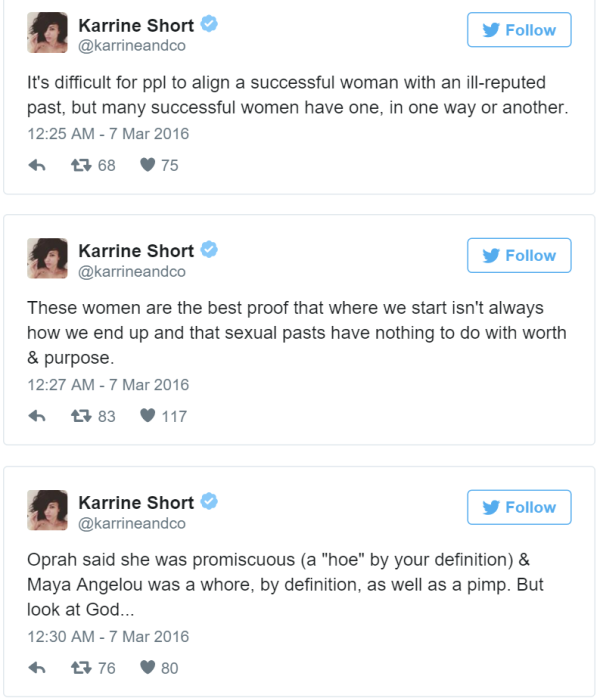 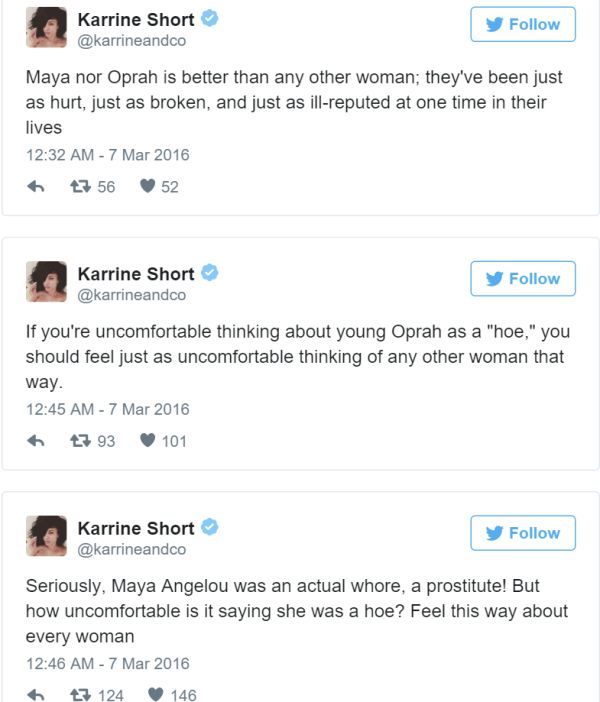 This is what you and the people who are insulting Karrine don’t understand.

She is not insulting Oprah and Maya she is pointing out what they would have been called when and if they were not famous.

They just don’t want to understand it.

The thing is, they were transformed when they became famous. Karrin became famous still a hoe. That’s the big difference. The inability to become more than a hoe is the problem, not that a person was one.

That’s the point that Karrin seems to be missing here and why people can’t look up to her.

I agree. It would be much more powerful if the women being called names didn’t use them.

She was trying to prove a point. If Maya Angelou and Oprah had never become who they are and were, this woman would have labeled them “hoes.” Yet no one would say that about these two amazing, beautiful, talented, kick-butt women because their sexual history does not define them or their legacies. It has in fact altered their respective histories and outlooks and molded them into modern champions. Maya Angelou was a prostitute, and yet we read about her in school and we listen to her books and we read her poems at church. Clearly her past didn’t hinder her,… Read more »

It’s not THAT revolutionary of a point. Anyone who has read a book about them or seen a documentary made the same observation without the crude language. Women’s sexual history isn’t what makes people call them derogatory names in the first place. You don’t even have to HAVE a sexual history for someone to have called you something- you just have to be a woman. Any criteria that someone uses to justify calling ANY woman a “hoe” is circumstantial. It’s much more forward thinking to stop thinking of women in those terms period.

“If Maya Angelou and Oprah had never become who they are and were, this woman would have labeled them “hoes.”–But that’s the operative word here–they BECAME more than hoes. Karrine hasn’t.

Maya Angelo being a prostitute and madam is news to me!! Off to Wikipedia to do some researching.

I think most people are aware of that part of their pasts, but they’ve just accomplished so many other things that it’s no longer important.

She is right though. Their past is definitely a part of their makeup and provoked their accomplishments. Neither Oprah nor Maya shied away from it but it is way easier to erase those facts from your minds when all you see is their bank accounts. Any woman has just as much a chance of achieving that level of success so long as she wants it.

Kim Kardashian is worth more than Maya Angelou and she’s dragged. Money has nothing to do with it.

Oprah and Maya Angelou past is something we learned about them after/during the time of a respectable career and reputation. We discovered them as intelligent talented driven women first and foremost. We only know Karrine, Amber etc because of their sexual exploits. That is how THEY choose to introduce themselves to us. Just emphasizes the importance of first impressions, that these women are trying reinvent themselves now.

The way I see it. There is no need to look down on someone like Karine. She made her money in a way that society has allowed being a woman in her particular position. Instead of penalising and talking down to her, people should support the community by investing into awareness and seminars, whether through school talks or community groups about relationships, sex, love and self love since there tends to be a lot of negativity spread around.

I really don’t see how people have the audacity to think ANYTHING about what another woman does with her body.

Sorry Karrin but Maya and Oprah transformed. When is your transformation going to happen?

The difference is that Oprah and Maya aren’t exposing rappers in a book, then getting mad at the world because they didn’t get the attention the wanted. They were actually making moves.