Last Tuesday, at least 31 people were killed and hundreds injured in the Brussels explosions, which were claimed by the Islamic State.  Many people across the world rushed to express their condolences on social media and other outlets.  Businesses also shared their sympathy, including SheaMoisture, which shared it to Facebook.  However, many of the company’s customers were not too happy with the post and went in on SheaMoisture for ignoring similar terrorist attacks in Ivory Coast, Nigeria, and other black nations.

It all started on Wednesday when SheaMoisture posted the following to its Facebook fan page: “Our hearts are with those affected by this terrible tragedy in Brussels.” 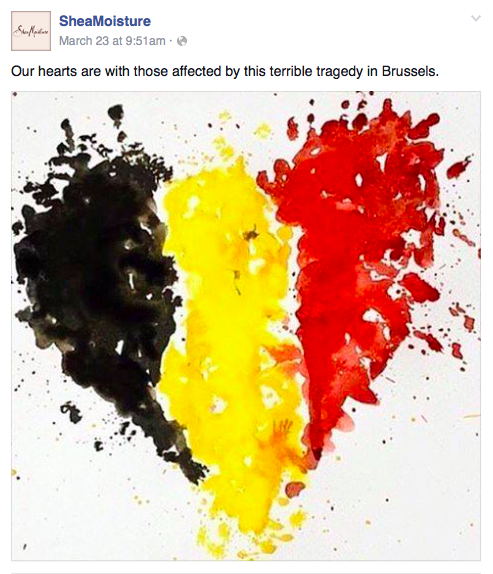 Responses from customers immediately flooded the page scolding SheaMoisture for ignoring atrocities in the black community.  Some customers even expressed boycotting the company:

Sorry, but I will now be unfollowing this page. For this this to be a black run black, own company it burdens my heart to see this but not a flag for Ivory Coast or Nigeria… I mean wasn’t this company started in an African country?

There was just a terrorist attack in the Ivory Coast. Where is their flag? Where’s the support? Smh ?

Where was this sympathy for Cameroon, Nigeria, Ivory Coast, and Kenya. All these 4 countries suffered from terrorist attacks last year and this year just like Brussels and Paris. But why pick and choose who to sympathize with especially coming from a supposedly black owned company. I have been using y’alls products for 2 years now, since I’ve gone natural. But now I will be moving on to another line. Sorry not sorry… But this was disgraceful

I buy shea moisture products often, but I will now look for another company to support. You all post to show support to a country that robbed Africa blind and have not posted anything in support of Flint Michigan, Ivory Coast nor have you all posted support for Nigeria. SMDH. I will also let all my natural friends know to withdraw their support for this company. Mixed chicks, curls please remember this isn’t the only natural hair product line.

I’m sorry that I’m not sorry…we have enough going on here with our own race, I don’t have time to be worried about a race of people that ain’t thinking about me or my peoples situation…

To be fair, there have been at least three attacks in West Africa in the past few months that have not received the level of attention as the most recent one in Belgium.  On March 13, al-Qaeda opened fired on beachgoers in Ivory Coast, leaving 22 dead — Ivorians and foreigners — at the Grand Bassam beach resort.  In January, terrorists killed at least 23 people in Burkina Faso.  Lastly, this past November, 27 hostages were killed in Mali by an al-Qaeda affiliate.  But was SheaMoisture in the wrong for expressing sympathy for the Belgian attacks?

Yesterday, SheaMoisture responded with the following to its Facebook fans:

Many things happening in the world are tragic — and a social media post or commentary about any of them in no way minimizes the others. My childhood was marked by tragedies similar to this one and I understand it first-hand, which is why we invest to build out our communities, especially in Africa. As a family from Sierra Leone and Liberia, we have lost many loved ones to the civil wars and, more recently, the Ebola crisis. In the recent attack in Ivory Coast, our family members have been impacted. Brussels has been one of only two transit points to Liberia for the last 25 years while the country was in crisis. At the time of the attack, people on their way to Liberia including friends and family were — and remain — stranded. None of these tragedies — wherever they occur in the world — are times or situations to assign levels of importance of one over the other (especially when human suffering is involved) nor are they times to be judgmental towards those expressing condolences, compassion or commitment to trying to help to bring about positive change, and certainly not those who have publicly dedicated their lives to fighting these injustices, whether through commerce or otherwise. If you feel compelled to do that, then I support your decision to not follow SheaMoisture and wish you the best in finding a brand to support that you feel works for you, stands more aligned with your interests and that invests in your community. While unfortunately there are too many tragedies around the world for one person, brand or company alone to ever be able to post about or impact all of them, that does not mean that we will cease to raise our voice, make a difference where we can, or quite simply, extend our heartfelt thoughts and compassion in a world that is certainly in need of more. We encourage everyone to do the same. If you really care to fight injustice, now more than ever is the time to support the one business that comes from and stands for community and stands to fight these injustices not just with words and social media posts but with millions of dollars, time, effort and love! Richelieu Dennis, Founder & CEO Sundial Brands (SheaMoisture, Nubian Heritage, Madam CJ Walker Beauty Culture).

thats a crap response sorry, ..there are many tragedies blah blah and yeah you choose which ones to show support too which clearly means NOT the african ones they claim to be so closely effected by

Wasn’t Sundial/Shea Moisture sold to Bain Capital or something like that? Bain Capital is a Massachusetts-based investment firm founded by Mitt Romney. So, in a sad way, this makes sense that Shea Moisture recognizes what happened in Brussels and not in Ivory Coast. There was a youtuber conscious sister who discussed Sundial’s sell-off in her video. It was very informative. That’s why you see Shea Moisture constantly on sale and basically everywhere now. So for people to get mad at Shea Moisture is kinda in vain, especially if a white-owned investment firm has their hands all up in their business.

I agree with you. I’m so sick of the white washed biased media that i’m almost turned off it. Just on Saturday gone I heard of an assassination of a South African activist who’s part of a community opposing an Australian company threatening to take over their land in order to create a titanium mine. However this along with the atrocities in West Africa didn’t hit mainstream news and these incidences have affected thousands of lives. Totally disappointed in Shea Moisture’s lame response.

His name was Sikhosiphi Rhadebe if people want to read up on it. A god damn tragedy.

I agree. People died either way but being that they are from African countries I would expect them to show more support. I feel that most people on social media show support for the things that the media focuses on more. and thats the problem

Great response there are tragedies accuring all the time . Whether you are black or white it DOSENT matter !! The Brussels aftermath left people without legs!!!

Shea moisture your products are great but very expensive !!!!

I don’t change my FB profile to anyone’s flag or even mention “praying for insert country” because somebody is always going to say “well what about”. Reminds me of when I was a kid saying my prayers during a visit to my dad. I said “God bless mommy and daddy and everybody in the whole wide world. Please help me be a big sweet girl” and my dumb stepmother got mad I didn’t specifically say her name. My dad was like “she said everybody in whole world.” How can one be a true Christian or any person of faith and… Read more »

Where was the support during Ebola? Both Liberia n SL were gravely affected. Glad the lenses are off.

Really with the response? Moving to CURLS line

So what’s the point of their statement? What your telling me with your weak response is that even though there are atrocities in so many other countries, you choose to speak on the ones that brings more attention to the world? I don’t know what to think with this. It proves that the terror attacks in Africa are not on the minds of anyone as I wasn’t even aware of the recent attacks in Africa. And I’m an avid news watcher. It sickens me, it angers me that more attention is not brought to the forefront with this tragedy in Africa.… Read more »

If anything, they’re the ones creating the hierarchy by only expressing sympathy for Brussels and no African countries.

Shea moisture sold a portion of their company from what I heard. Don’t know if its true or not.