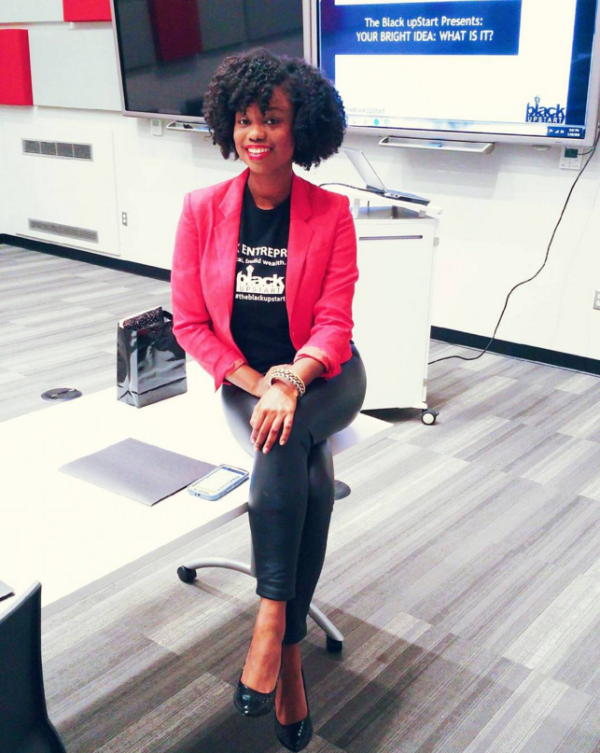 In early March, Williams attended a Confederate flag rally at the South Carolina state house. She posted a photo of herself in the midst of the flags dressed in all black, natural hair out, holding up a fist.

“Two white men asked if I was scared to visit the South Carolina State House during a confederate flag rally? My answer. No! If my ancestors could birth families and faith in the face of slavery, find dignity in the midst of separate and unequal, discover entrepreneurial spirit when locked out of capitalist systems and still thrive despite systemic oppression…I can walk through a crowd, #fearless, fist up, fro out and have open and honest dialogue with other citizens regardless of race about American history!
#SouthCarolina #AmericanHistory #TheBlackupStart” 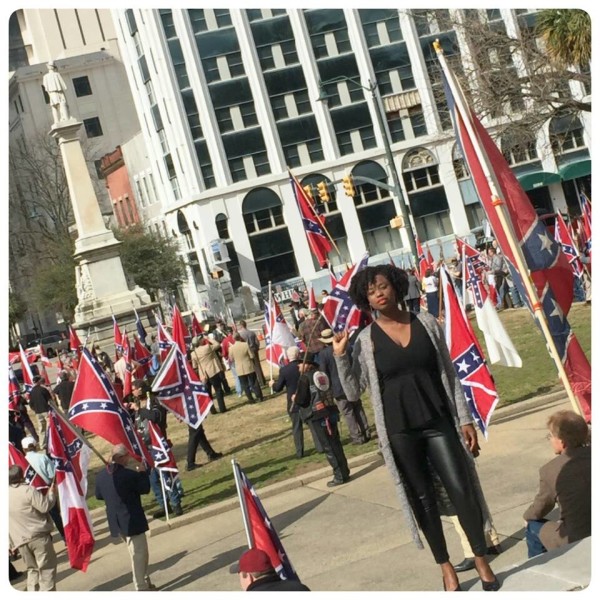 The photo went viral on Facebook, being shared more than 34,000 times.

In a HuffingtonPost essay, Williams explained why she felt no fear in the hostile gathering space;

“Though never explicitly told to fear White people, the elders in my community — burdened with the memory of Black codes and encumbered with recollections of Jim Crow — encouraged me to work three times as hard as White people in order to reach the Promised Land pastors preached about in pulpits. They pushed me to hustle in silence, conform without protest, and accept the unfinished accomplishments of African-American historical giants… not because they didn’t know courage but because they understood the consequences of White cowardice.

I obeyed without question until I listened — along with a nation — to a Black boy’s cry for help as a homegrown terrorist masquerading as neighborhood watch murdered Trayvon Martin then claimed himself as the victim. Along with Black people across the country, I felt a call to wake up and cast off the safe blanket of conformity in order to challenge a system that exonerated a killer.

And along with many fearless Black people… I joined in tweeting, organizing, fundraising, marching and placing Black bodies in danger while simultaneously demanding change from a country priding itself on the unfulfilled promised of the 14th amendment: equal protection for all.

During this time, I learned myself. My “self” not being who I was as an individual but as one thread in an intricately, woven brightly colored narrative of Black people whose uncompensated labor enabled this nation to become a super power. Specifically, a super power who exerted power on us but never shared it with us as descendants of Africans whose bodies, families and sacrifice made America possible.

Through discovering the historic truths of yesterday, I learned about slaves who fought for their freedom through entrepreneurship. I studied the economic liberty that the Reconstruction era briefly afforded Black people. I delved deep into the history of thriving economically viable Black enclaves like Raleigh, Jackson Ward, Tulsa and the District of Columbia.

Though I found atrocities, I also found an abundance of excellence: Black excellence. I found a people pregnant with purpose birth communities of exceptionalism, and deliver a progeny unshackled by enslavement and invigorated by the promise of freedom won by fearlessness.

So when two White men asked me was I afraid to walk through a Confederate Flag Rally to visit the spot where present-day, history maker — Bree Newsome — snatched down a symbol of racism and hate… my answer was “no.”

As my co-worker and I approached, we were not scared when the protesters yelled their misinformed opinions at us.

We were not scared when a small group of White men debated us in the midst of a sea of like-minded supremacists.

We were not scared when we enlightened them about how Confederate history represented a time when White men fought to protect the free labor of Black people, and how that flag symbolized the misguided opinions of a few and should not hang any place where a decision-making body was tasked to make laws for all.”

I really wish Black women would stop needlessly placing themselves in the line of fire. Our ancestors were brave, but they were strategic about it. An unarmed, lone woman surrounded by historically violent racist males? Not a good idea.