22-year-old Karmenife Paulino was raped during her freshman year at Wesleyan College. The assault colored the rest of her college experience, destroying a place she’d hoped could be a haven.

“…she found herself crying in class, avoiding her rapist, poring over the university’s sexual misconduct policies, filing reports and attending hearings until, finally in her junior year, the man was expelled.”

In a photo series aptly titled Reclamation, Paulino decides to symbolically regain control of her sexuality in the midst of misogynistic fraternity culture. Here is how she describes the project, which was photographed by Tess Altman;

“Reclamation is a photo project seeking to reclaim fraternity spaces, ones that have been marked as dangerous for certain members of the Wesleyan community, though a reversal of both role and gaze.

Settings include Psi Upsilon, Beta Theta Pi, Delta Kappa Epsilon and The Eclectic Society, as these institutions create space on campus for sexual, racial and gendered violence to occur and fester. “Frat boy” models can be found in submissive positions to gesturally mimic how women and other marginalized voices are often treated behind these walls. Karmenife is clad in dominatrix gear to signify a certain power and ownership of her sexuality and positioning, as women who exercise power and confidence in their sexuality are routinely demonized both within and outside of the fraternity [i.e. if she is sexually assaulted, it is quickly deemed that she had been “asking for it”].” 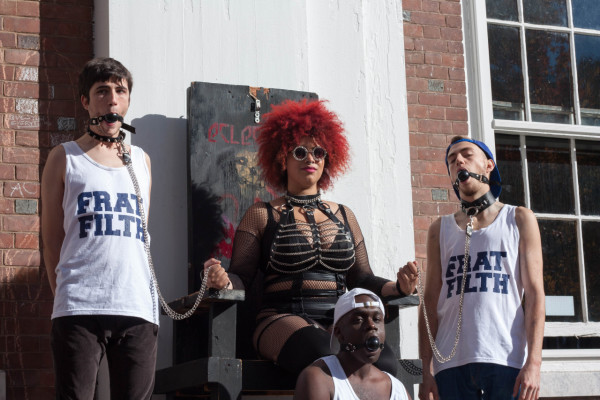 Race plays a role in Paulino’s experience. Her attacker was black and, much like the Morehouse rape victims who came forward in January, Paulino says she feels some guilt for speaking out against him.

“When we speak we have to represent the entire community, which is horrible,” Paulino said. “Because my rapist was black it was really difficult for me to call my rapist a rapist. I felt like I had let my community down and like I was enforcing stereotypes.”

Despite that conflict, this photo series is incredibly striking. 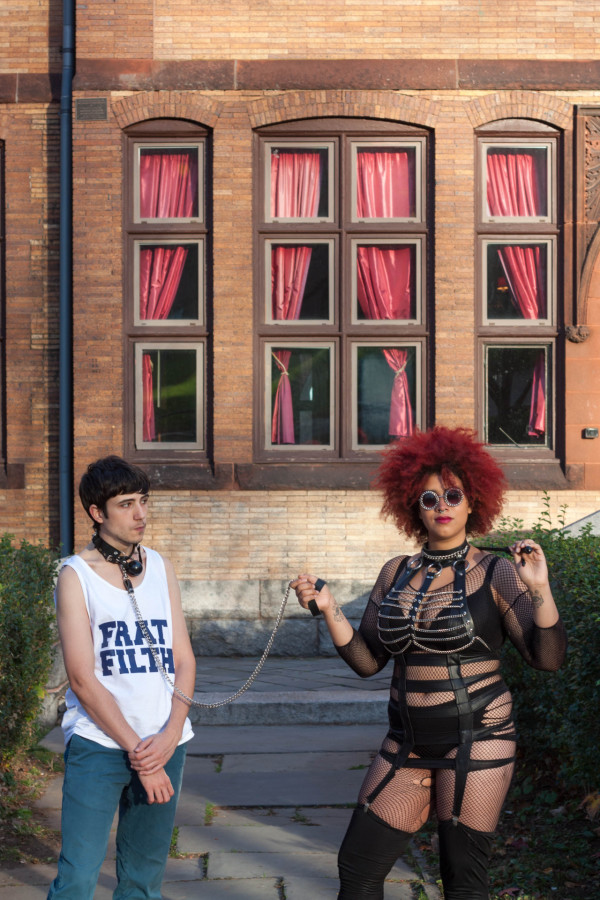 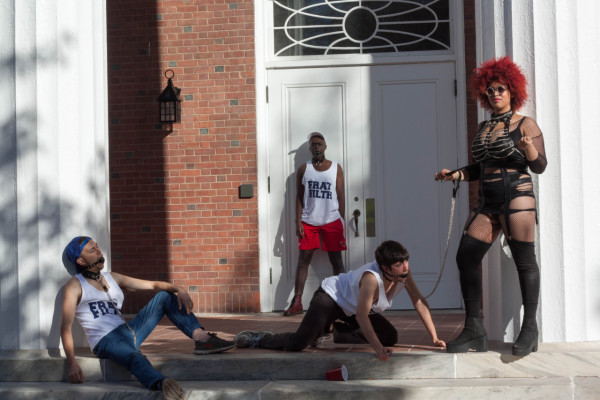 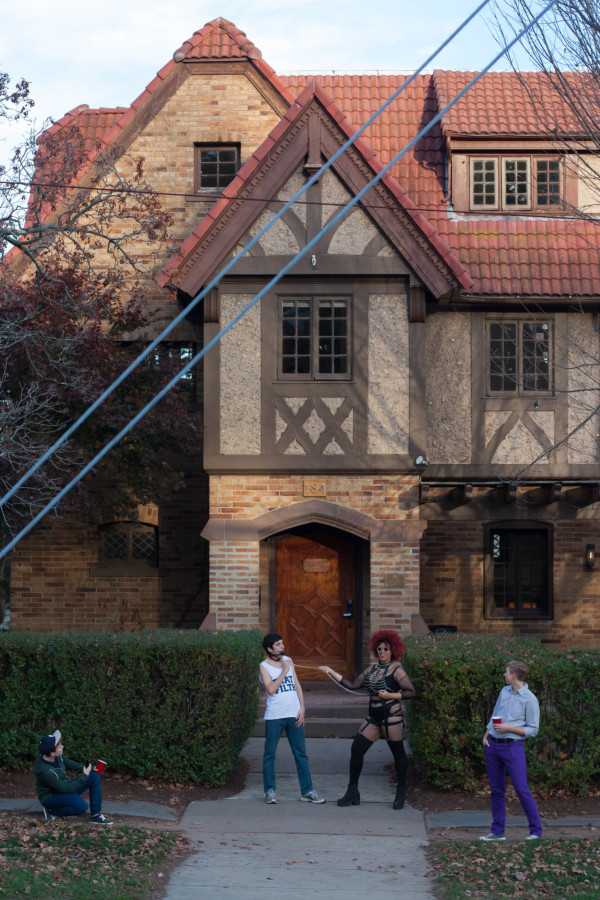 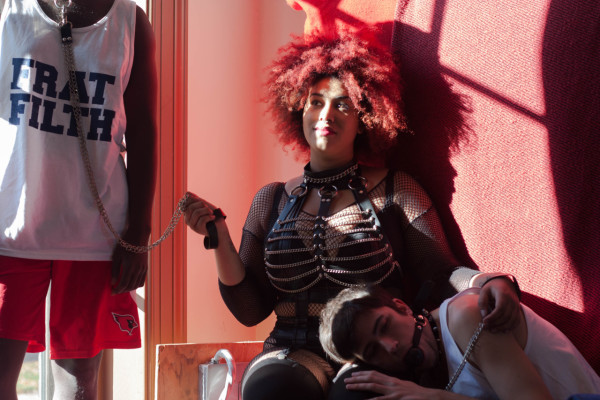 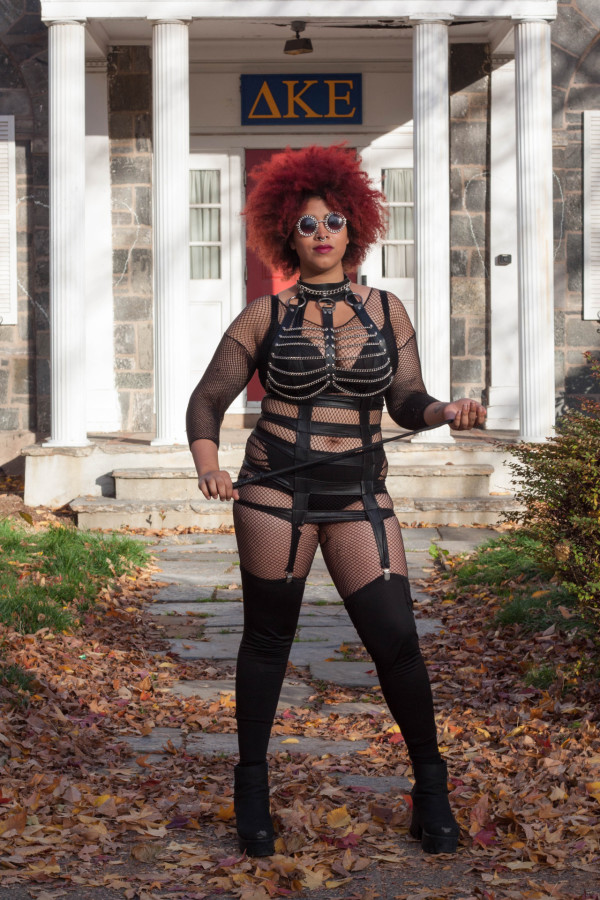 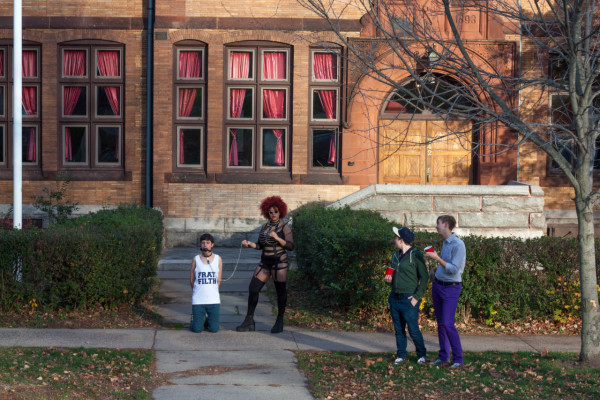 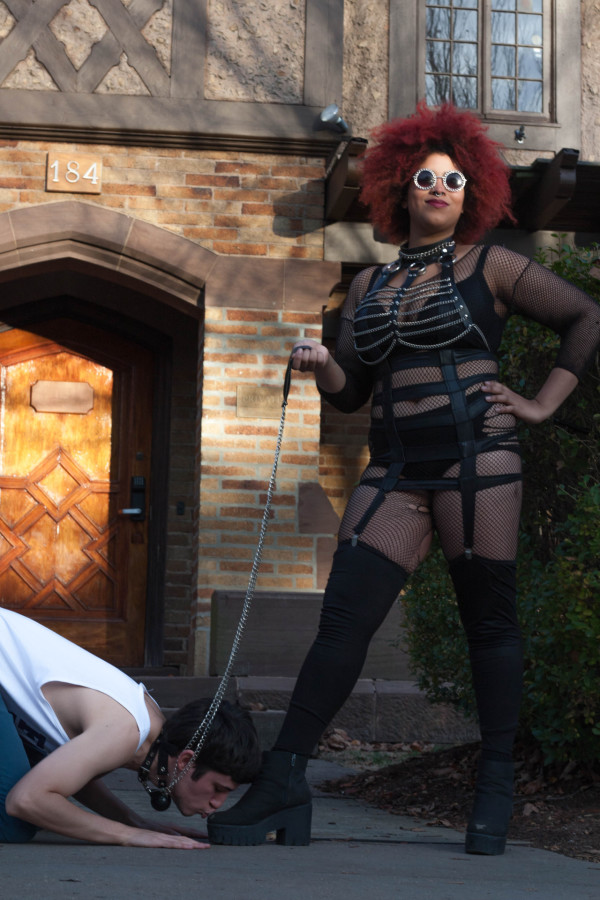 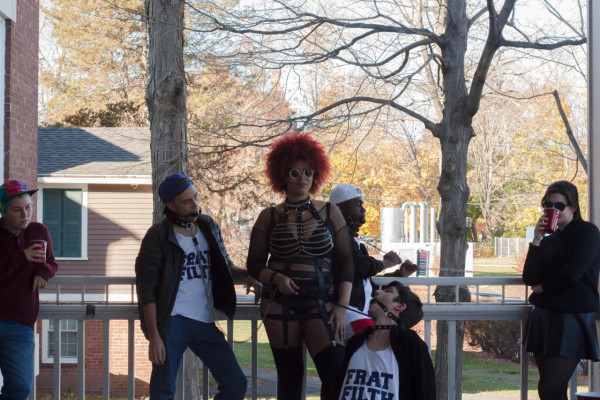 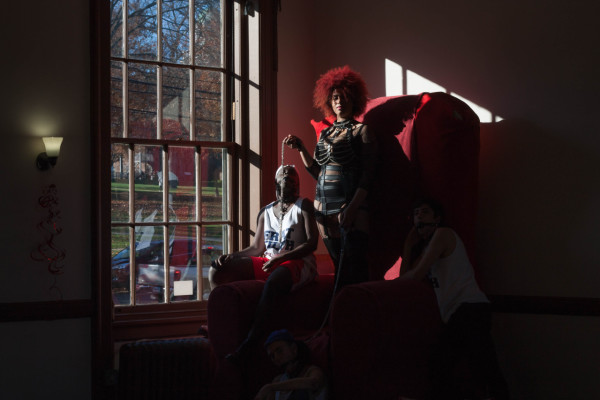 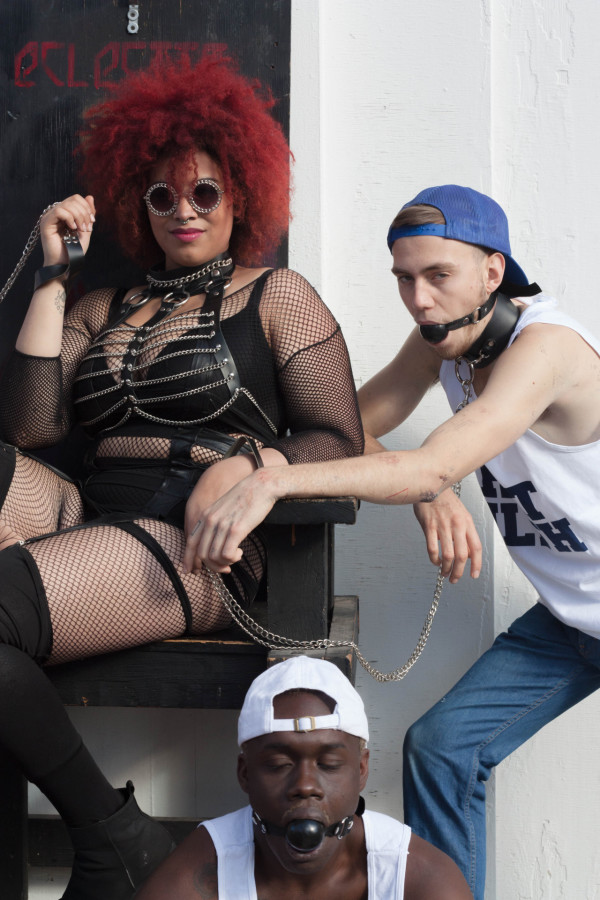 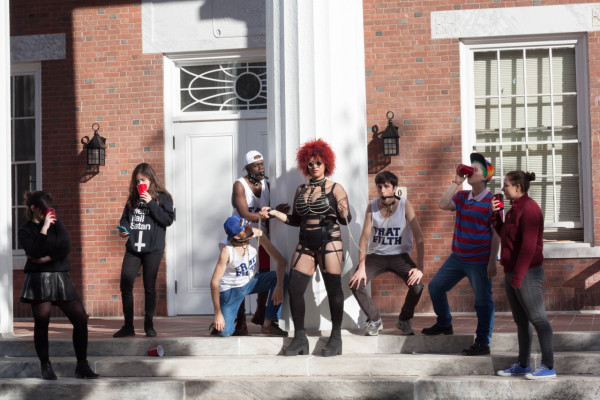 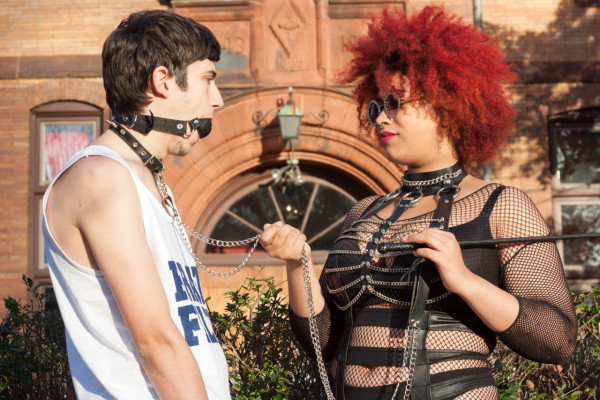 Is this supposed to be empowering??? Lordtt!! You know what? Let me keep my comments to myself.

No please don’t. You may not get any pats on the back but there are others out there thinking the same. “Striking”??! I feel these photos are at best amateur-looking and tacky, at worst a sad reflection of someone damaged, whose idea of ‘healing’ is this desperate attempt at looking empowered. It’s ironic — and not in a good way, trust me.
I’m not gonna applaud this just because …

It’s just a matter of opinion. Empowerment is subjective as is being offended. You can’t speak wonders for the whole community. You’re entitled to your opinion, you’re right you don’t have to like it. But personally me, I’m happy that she’s not letting herself be held back in her own way. Who says she has to “conform” or dare I say be “classy” in her method of healing? No one. The psychology of healing and the methods to obtain peace are powerful tools. I suppose I’ll have to agree to disagree with you on this. It was interesting reading your… Read more »

What part of what I said entails speaking “wonders for the whole community”?
The view that “she’s not letting herself be held back in her own way” is definitely a subjective one. One thing we seem to be agreed on… our disagreement on this.

How is it not?

See comment from ‘Rose’ 2 days ago. She offers a great commentary on why it is not.

well she’s doing it for herself, not you or anyone else. What matters is her perspective and what empowers her. Everyone else’s perspective is irrelevant, they can do their specific empowering thing as is fitting for them.

Yep it most def is. I’m also an alumna and I’ve spoken with Karmenife, she’s a very interesting young lady and I wish her all the best.

I…dont know how to feel about this to be honest.

I was thinking the same thing.…

Yeah this looks so wrong and reinforces a stereotype.

Anything for attention. I looked at this and didn’t really see empowerment. It made me feel more irritated than anything.

The photos are striking! The doors to a bank are open but that doesn’t mean it’s ok to steal the money or conduct a bank robbery. NO ONE EVER ASK TO BE RAPED. Rape is a crime and should be treated as such! Period!

The school should be Wesleyan University.

I wonder how the conversation went with the guys with the gags before they did the photoshoot.

This is so ridiculously stupid. She looks dumb putting herself out like that. How is this in anyway empowering-especially to victims of rape?

Well, she is a victim of rape, and she did this to empower herself. So that’s how, for starters.

How dare you. Until you have experienced the fear, degradation, and humiliation of being raped you don’t get to talk about how she feels. I was raped when I was 4yrs old! I was a child and confused and scared. Those feelings never leave you. I have severe PTSD and social anxiety. I don’t like meeting anyone new for fear they might hurt me, even women not just men. This woman has had her power, control, and her sexuality taken from her. This is her way of taking it back. It may seem weird to you. But until you go… Read more »

I agree with Lola Rose and fromanotherplanet.….

Why is identifying as a rape victim sexually empowering? There are other forms of physical and bodily harm that a person may be a victim of (like robbery, marital, child, and physical abuse, etc…) Yet, they don’t feel compelled to parade their victimhood like a new social or sexual identity. The photos are obviously provocative, like the creators wanted. However, it begs the question: is this really empowerment? Why is degradation acceptable when it is done to men by women?

If she feels empowered then let her be. Not all women are empowered by the same things. I’m here for it.

Because attention. People these days use their most negative and traumatizing experiences to garner attention. It’s not even that she’s talking about it that’s the issue. It’s how she’s going about it. I take rape very seriously, which is a reason this just doesn’t sit well with me. Rape is one of the most horrible thing a person could go through. I think it’s worse than being robbed. Doing stuff like this is not only a slap in the face to other victims (at least INTELLIGENT victims with a higher IQ), it just comes off as she never got much… Read more »

I support this stance 100%! No disclaimers.

If this makes her feel empowered then that’s great but this is a vanity project, the pictures are badly taken and derivative.

Welcome to 2016. This is more pathetic than it is empowering. Most rape victims aren’t going to look at this girl as a role model. If anything, it’s an embarrassment to nature. She really wanted her 15 minutes of fame though, and used her attack to garnish it. I am so ready for this planet to just be knocked out of orbit and into the sun.

How dare you. Until you have experienced the fear, degradation, and humiliation of being raped you don’t get to talk about how she feels. I was raped when I was 4yrs old! I was a child and confused and scared. Those feelings never leave you. I have severe PTSD and social anxiety. I don’t like meeting anyone new for fear they might hurt me, even women not just men. This woman has had her power, control, and her sexuality taken from her. This is her way of taking it back. It may seem weird to you. But until you go… Read more »

Sweetie, you know nothing about me or what I have been through, so pipe down. I don’t care about your life story, so it’s merely irrelevent. Stop copying and pasting your life story to every reply that doesnt agree with this. My opinion still stands. She is doing this for attention. She is not a role model for rape victims. There is nothing “empowering” about this. She looks like someone who clearly didn’t get a lot of attention growing up, and using her situation to have some spotlight, and that’s really sickening and heartbreaking. She is a moron, and so are… Read more »

You wrote to another saying that being raped is worse than being robbed. Well no shit Sherlock. Being raped is like being murdered. Everything is torn from you at once. It’s worse than being dead. Because while that person is raping you, you have know idea if they’re going to kill you. They keep you confused and scared, never knowing if they’re going to let you go to live in your fear and humiliation, or kill you right then and there and get it over with. You also said this was some slap in the face to other victims. Well… Read more »

solidarity!!!!! all to often frats protect and encourage rape culture, racist behavior, and need to be gotten rid of asap

Reclaiming her sexuality back from a position of strength. It works for her so it’s all good.

As a sexual abuse & attempted rape survivor I know exactly what she is saying. Unless you have been in her shoes don’t tut tut her for putting on those black boots.

You said it perfectly!!!

Precisely what I’ve been thinking for a while now.

Rape is a horrible thing and no one who is sensitive to this hurtful topic, whether male or female, should ever have to suffer its consequences. But this girl [and these pictures] unfortunately, succeed only in looking ridiculous. She had been violated and abused once and now, in these photos, she is being violated and abused again! there is a fine line between real art and just plain crazy.

More power to YOU baby girl.

Rape is a forced act while s&m is voluntary by both parties. Seems like she is drawing a correlation that is very disturbing.

I don’t get it. Oh well moving on…

[…] photographs to Tumblr  in December of 2015, and they’ve since been shared on websites like Black Girl Long Hair , Mic  and Jezebel . “I’m shocked at how many people have been messaging me,” she […]

[…] to Tumblr in December of 2015, and they’ve since been shared on websites like Black Girl Long Hair, Mic and Jezebel. “I’m shocked at how many people have been messaging […]

[…] to Tumblr in December of 2015, and they’ve since been shared on websites like Black Girl Long Hair, Mic and Jezebel. “I’m shocked at how many people have been messaging […]

“I Feel The Most Powerful and Vulnerable In…” | Haptika