When 7th grader Bianca Temple was assigned an art project around the theme of transformation, she decided to portray her own journey of self-acceptance. Temple is bi-racial, and one of the only students of color at St. Elizabeth Ann Seton Middle School in Traverse City, Michigan. She created this piece, which her art teacher applauded and placed in a prominent school display case. 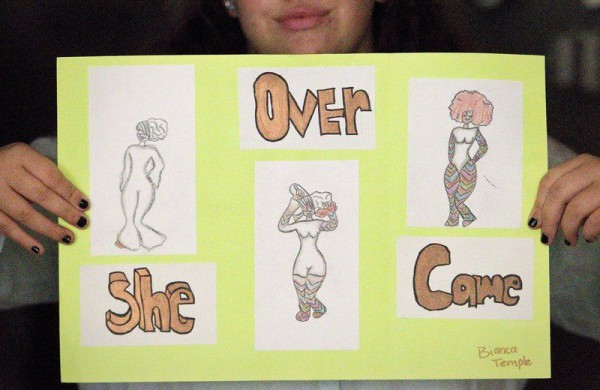 Temple says the art was personal to her.

“It connected to me because in my art, in the beginning of it, she has no color to her…She was being restricted from being herself, in a sense.”

However, the drawing was soon taken down following complaints from parents who felt it was “inappropriate”. School principal Carl Scholten backed the parents in a statement;

“After having the artwork pointed out to me by an adult, the decision was made to take down Bianca’s artwork as it raised concerns regarding the modesty of the image in the third frame…”

But Temple feels that race also plays a role; 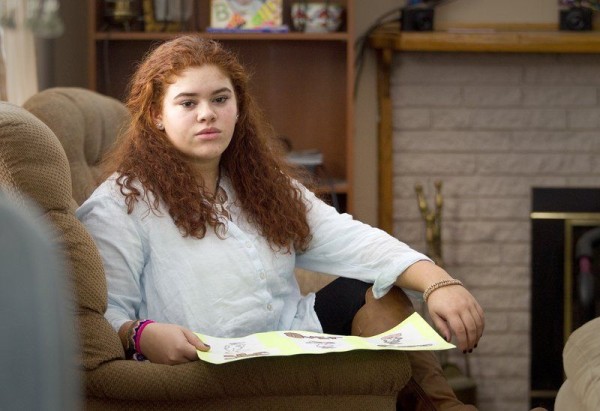 “They tell you, ‘express yourself, express yourself,’ but now they’re I guess putting guidelines on how you’re supposed to express yourself,” Ward said. “With something like this, when she’s proud of her work and her accomplishment and it just knocked her down, all the way down.”

The pictures were modest and I DON’T see what the big deal was all ABOUT. The body parts drawn were NOT “detailed”.
She did a GREAT job!

I mean when i first looked i couldn’t tell if the figures were nude.
It’s ridiculous either way but The school totally took it down for these reasons and not because the figure is supposed to be black.

She didn’t even draw any nipples on the breasts for them to whine over but somehow its “indecent”??? Women grow breasts and I guess that makes us indecent and immodest. Especially if the woman is Black and curvaceous.

Nothing wrong with the picture to be taken down. Shame on the school

That could’ve been a jumpsuit for all we know. I don’t see any nipples.

I can see why they took it down. She’s curvaceous and has boobs. Yes real women have curves and boobs, but that’s a little risqué for a 7th grade drawing.

Girls are 12–13 years old in 7th grade. Have you ever read a teen magazine? At that age they already discuss things like make up, boys and the shape of their bodies. Most have already have their period and have boobs, they probably see it in their mother’s too, what do you mean riske? Just curious. I mean we are not talking about 4 year old Pre‑K students?

Ignorant fools. Don’t let them win Bianca. Haters will come at you from all sides, but stay strong and keep loving yourself because it is THEIR PROBLEM, not yours.

If the drawings had been of a stick figure with an enormous thigh gap, no one would have bat an eye.

Seriously? What on earth is objectionable about that?

She’s 13–14 yrs old; has no one noticed what a lot of them are wearing today; not to forget what the Entertainment Media, TV and Social Media, and clothing stores are selling. Bunch of waaaaaaaaaaaaaaay over the hill people, living in the past, made a bad call; it’s called art, and is supposed to reflect society at the limits. #I’mStandingWithTempleWard

Biracial means she’s of two races. If she’s black and something else then she is black. I swear people are so dumb, if you say she isn’t black because she’s mixed with black and white then your an idiot. She’s half of what her mum and dad are. How hard is it to grasp smh

I don’t think their taking it down has ANYTHING to do with her being black. The drawings are risqué for being in a 7th grade display.

you’re entitled to your opinion but you should take your mind out of the gutter.

7th graders, you mean the 13 year old girls who’ve most already have had their periods and have developed boobs, talk about boys and the shape of their bodies, especially if you are on the heavy side as this girl is? That’s risque for a 7th grader? A picture on a leotard with boobs and curves, possibly the same they would dress for a school play or modern dance or ballet??? DO you see a naked person instead? Unbelievable! That’s why things are the way they are.

I think the reactions of the parents is “much to do about nothing.” I would be very surprised if the complaining parents monitored the music, video games, social media activities, movies, television programs and even the commercials their children take in. If they did, they would realize that this young lady’s depiction probably evoked little more than a yawn on the risque scale compared to what their children are exposed to already.

But how does the last picture look naked though? Not ok to be black in that school.

This is not only racist against black people, it discriminates heavy (fat) people, what is so wrong with the third picture? black extremities and red hair? That is how she sees herself. People have more sense for the indecent than art, all the greats painted naked people. All the ones who saw indecency on this 7th graders’ depiction of herself are disgusting.

The comments on this thread are as unfortunate as this episode in Temple’s life. They magnify why young black girls like Bianca grow up insecure and unaware of their powers to greatness. First, it is unfortunate that some demented minds choose to sexualize this young girls interpretation of her transformation and self discovery. The work may not be technically proficient but it is a brilliant approach to the subject of transformation and should be celebrated as the art teacher knew it should be. Second, this was a self-depiction and in case some people are unaware, some 7th graders develop more… Read more »

Cute girl but she is biracial and NOT black.

Oh my goodness I love that tableau, need a t shirt like that. This girl has a bright future.