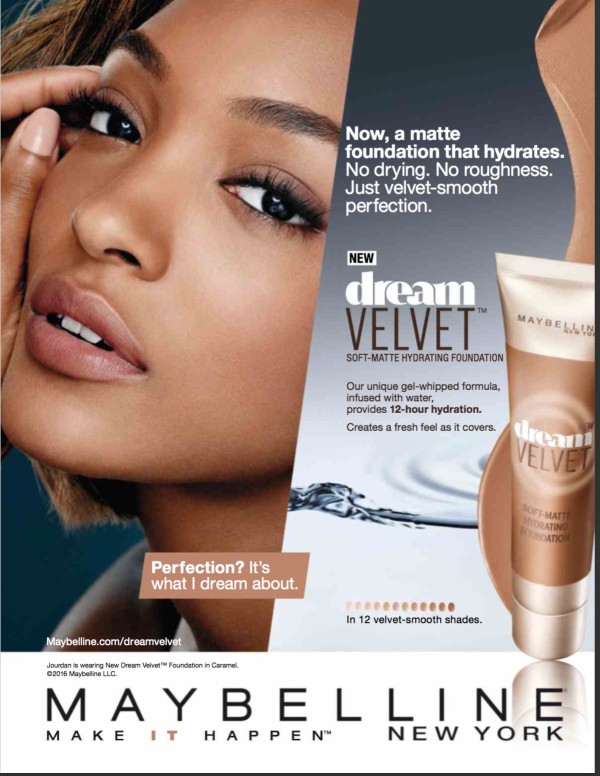 The self-described “product junkie” immediately sought to purchase the foundation but found that, in the UK, the darkest of the 12 shades are not available. The darkest matte foundation Maybelline sells on its UK site is Sun Beige. 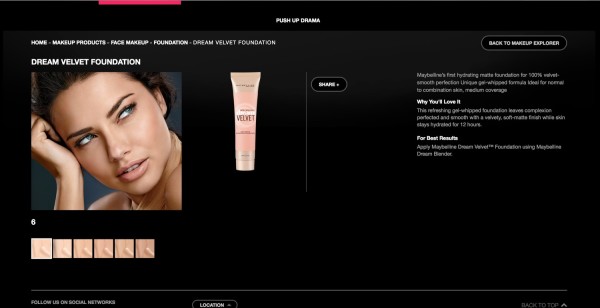 The Maybelline matte foundations available in the UK. 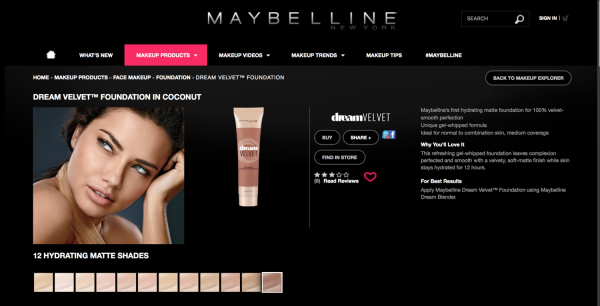 The Maybelline matte foundations available in the United States.

Gray wrote a blog post questioning why Maybelline was not catering to brown-skinned black women and dismissed the notion there isn’t a market. (According to a 2011 census there are 1.9 million black Brits in the UK.) She also questioned why Dunn was used in the ad when her foundation color isn’t even available.

“Even though I am annoyed by this I am not surprised, this is an issue that plagues any woman who is not white. Getting anything to suit your skin tone from global beauty brands is almost impossible.

I like so many other black women have to buy high end foundations and concealer because billion dollar beauty corporations simply don’t cater for us. They always make the same excuses saying there is no market for the product which is just not true. There is a huge population of black women in the United Kingdom.

Maybelline, L’oreal, Rimmel, Max Factor and any other drugstore brand do we not have skin? Don’t we also need makeup? Not everyone can afford to or have to be subjected to spending over £20 on foundation.

Maybelline has taken a Black British woman and used her in their adverts to sell products but Jourdan couldn’t walk into boots or super drug and buy the same product she is advertising.

It is sad because I buy maybelline and other drugstore brands regularly. Their mascaras are amazing but they are still not catering to a huge and hungry market and we are still having this discussion in 2016.” 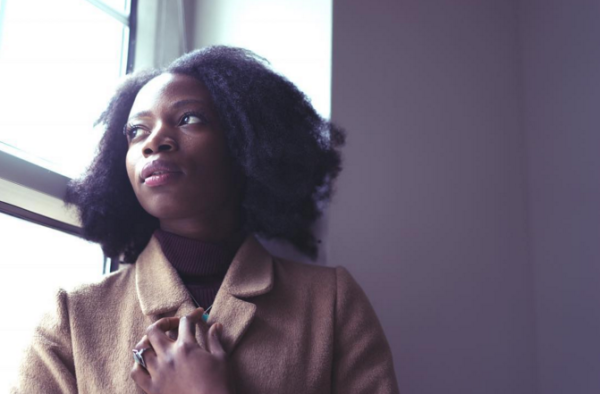 In an interview with The Daily mail Gray expounded on her frustration.

“I did not start wearing foundation until I was 20 years old because I could not afford to buy MAC and other expensive brands, I was always envious of my friends in school because they could walk into a shop and experiment with make-up and I could never do that.”

Maybelline has since replied that they plan to make the darker foundations available in the UK in the coming months.

this is the problem…cosmetics for dark women BY dark women/men the average product junkie can not afford.…yet cosmetic giants run by old WHITE MEN do not care about us or our $$$$.…a dark woman can not win.…at least stop giving OLD WHITE MEN

but even business wise, black companies still may not sell their products locally if they do a demographic search and see that the black population isn’t large enough to sustain sales and business, which is why many of the black owned companies sell online. they can keep the prices low and have a greater impact on supply and demand by selling worldwide than trying to satisfy a small population within a town with a local store

It’s the same here in Canada.

I wrote to Covergirl a long time ago, when the Queen collection was coming out. They told me there was no market and not enough women of colour in Canada to sell darker shade products.

Which is clearly a lie since any product that does cater to darker skin tones sells out within a day. There are so many products that I see available in other places that I simply don’t have access too.

I have no choice but to stay with MAC and a few brands at Sephora that actually release a wider variety of shades and undertones. It’s so frustrating.

The Queen Collection us very hard to find here in the US. Even in the most diverse areas dont sell it, you have to travel black neighborhoods.

Side bar: U love Maybellines Fit Me foundation #355 Coconut.

There is a ton of Queen where I live. I have seen it I know at Walgreens and Kmart. My neighborhood is diverse but mostly white.

britti the dub
Reply to  sennaxor

I did some research and found a black-owned cosmetics brand in Canada called NAGI Cosmetics. They have a store in Montreal. Hope this helps.

Buy black. There are plenty of black owned make up companies. I have no problem finding make up that matches my skin tone perfectly and I have much more melanin than the black woman in the first ad. Check out my pic on the left

Yes Yes Yes. For many years I have almost exclusively bought foundation made by and made for black people. Color and quality is superb.

This is why I don’t buy from big companies. At some point when they saturate the market they’ll remember black women and act like they’re doing you a favor. There are plenty of small companies out there that specialize in makeup for black women. Take a look at Valana ‑http://face-natural.com/blog/go/valana-minerals/

Yah, this is part of why I’ve never worn makeup. That said, you point out the number of black British people, but even if all of those are women you’re down to 3% of the U.K. population. Like other people are saying, the best best seems to be to go with black-owned businesses because with big businesses catering to a small group doesn’t have enough return for the investment in their mind. Most places operate on “one size fits most”. I do think it’s bad that they use a black British model to highlight diversity then don’t expand that market… Read more »

Many black women myself included suffer from dark spots, uneven skin so I chose to wear makeup.

Too true I dont wear makeup which was really made to make WW look pretty lets face it, without their cake they all look ? ??????

Same here in France, it would be nice for me to be able to buy drugstore make up that matches my complexion, but it is not happening.

L.O.G. Cosmetics is a black-owned UK beauty brand. They may have what you’re looking for. Not sure if their in stores (as i’m in US) but you could email them and see.

I don’t buy drug store foundation. My experience has been that it’s garbage. Breaks my skin out and the colors don’t work for my tone. Last time I tried it was that Queen latifah stuff because it was on clearance. One use and into the trash it went. I know it works for some people and I get why people would be upset. Consider this why are we begging companies to take our money who obviously don’t give enough of a f about us or our money to make our shade. They obviously know we exist.

Exactly. I would advise Nadia to look into companies such as Black Radiance and Black Opal. Both are affordable makeup brands and in the case of Black Radiance, are made exclusively for women of colour.

The discussion Black people should be having in 2016 although a little overdue is how are we going to create for ourselves. The less we stop looking for these big companies to cater for us means the less disappointments in life. I don’t wear make up it’s not an area I’m interested in but I do remember reading about a sister who started her own make up range about 15 years ago. She stocked in Morleys, Brixton. I don’t know if she’s still going, but if Nadia lives in London she can check out the store.

Since I don’t but drugstore foundation I usually don’t pay attention to the selection but this got me curious about what things are like where I live. I live in US, specifically the south. I’m in Walgreen’s right bowand see a lot for black women. Maybelline Fit Me. Lo real True Match. Reckon Color Stay. cover Girl True Blend. Cover Girl Outlast. Cover Girl Ultra Smooth. Milani And there is a ton of Cover Girl Queen. Matter of fact it’s BOGO 50% off. I bought Queen once at Kmart. Maybe there is a way for people to order online.

This comes at a perfect time. Today I went to five different UK drugstores looking for a concealer to match my complexion. Usually buying my foundation from Maybelline, I just assumed they’d have the concealer too. Nope. Out of the dozens of cosmetic brands, only 3 or 4 actually cater to my skintone. Out of the five stores I visited today, ALL the concealers in my shade were out of stock. I was told to ‘order online or visit another store’. I should not have to visit store number 6 to buy a concealer to match my skin tone. Makeup… Read more »

That’s why whenever I go abroad, I make sure to pack extra makeup in case I run out. I can’t believe they only stopped at Sun Beige though! They want to call themselves a “global” company yet only have 6 different shades of White available as if every Black person in the world either lives in Africa or the U.S. Plus there are other people of colour beside Black women in Europe, and especially in Britain. What about women of Indian, Persian, Italian descent?

I don’t wear makeup ‚was never interested in it. low maintenance woman. For those who enjoy wearing makeup, you should spend your money on brands/companies that caters to you.

Same here! I only wear eyeliner, lipstick, & no color powder when I go out. Never wear foundation; hate the feel of it plus it was always the wrong shade

Here in Canada, trust me there NOTHING for black woman. I cannot buy any drugstore foundation. I do not understand why drugstore brand don’t carry anything for black woman that’s really funny and weird. They don’t see beauty it is in EVERY SHADES… When I am going to the USA it’s more flexible for sure but I will stick with my high end foundation. To be honest I love makeup but I am makeup free 80% of the time ahah!

And nobody talks about Lancome, french brand that american girls worships for doing foundation for every skin tone , whereas in france, lancome is only distributing shades of white. Same for L’oreal paris. So it’s not even surprising to me.