On the third episode of their OWN talk show It’s Not You, It’s Men, singer Tyrese and hip hop veteran Rev. Run had Amber Rose as a guest. She was there to talk about modern romance but things went left when she mentioned her discomfort with constantly being groped by her fans. 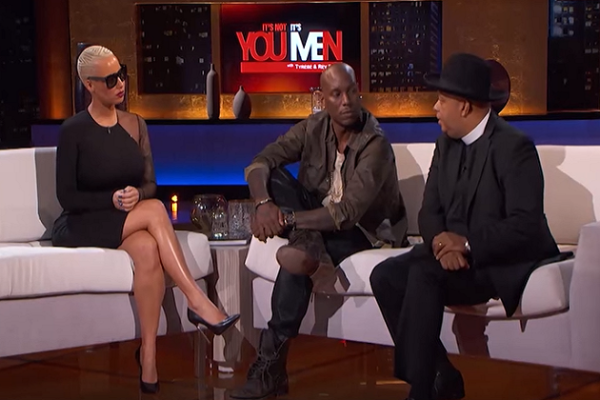 The men didn’t show much sympathy and Tyrese made a weird sports analogy to justify the behavior;

“Like, if you see a basketball player and he’s known as a basketball player, you’ll be like, ‘yo, let’s go play ball’ I’m just saying, the comfortability that people find in wanting to touch and grope you – it’s an energy that’s being sent out there that creates that type of response.”

After some back and forth Rose made a definitive statement;

Watch how the exchange went down below.

If you swap Amber Rose out for any number of young black men wearing street clothes, and Tyrese and Rev. Run out for, say, respectable old black folks or racist law enforcement, the hypocrisy of the argument becomes exceedingly clear. When Trayvon Martin was gunned down in cold blood, racist folks rushed to blame his attire — a black hoodie pulled up over his head — as well as the fact that he was walking at night.

To say that Martin somehow deserved to be physically harmed because of his attire is completely disgraceful — just like the argument that a woman wearing revealing clothes deserves to be sexually assaulted or raped. In both instances, it is putting the responsibility to not be attacked on the victim while ignoring the predatory behavior of the attacker. 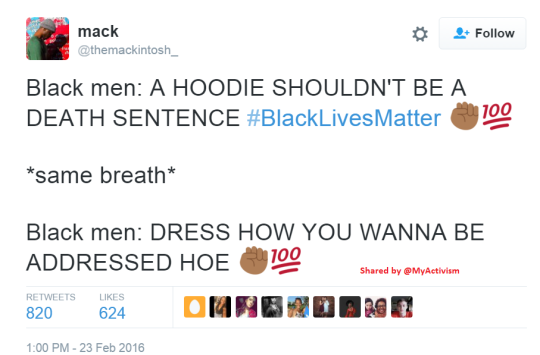 And then there’s this.

“Gotta dress how you want to be treated” pic.twitter.com/kImUOrazAw

“Let me dictate how women should dress to be respected” pic.twitter.com/LNVjV4mK1v

One thing we have to painfully admit is people would ALWAYS have a hard time admitting their faults. It’s an embarrassing part of human nature. nevertheless, it should NEVER be excused. We do not i repeat, DO NOT excuse the behavior of police men so why black men? Black men should also be held accountable on sexism because it’s hurting the black community just as sexism is. I believe that as this is being brought up, it would ignite a very heated discussion with both genders and at least, begin to stop black men from being irritatingly hypocritical. NB. Tyrese… Read more »

Wow.… just wow. Tyrese’s perpetually-naked-self has some NERVE!!! So can gay men seek their sexual pleasure from him when they see him in person? Thank you for exposing this mess BGLH. Rev run has daughters and still says this mess. Men expose their own foolishness daily. I don’t agree with things like Amber’s slut walk, but I can see how her activism, which in my opinion swings so far left to adjust for the right, is necessary when people like Rev. Run and Tyrese think what they said is acceptable.

This was exactly my point!!!

Also- the Slut Walk has been around farrrrrr longer than Amber Rose herself probably & was used for rape victims to bring awareness by having victims walk in the clothes they were attacked in (which was usually sweatpants or loose jeans, etc. Typical “non-slut” attire).

I am sick of men and their bs in general. The media is full of men telling women what they need to do, what to say, what to wear, and how to carry themselves. All of the advice out there is geared toward women and how they need to change, all in an effort to accommodate men. Where are the men telling other men how they need to step up and actually be men? Yeah some women need to cover up, but at the same time men need to learn how to control themselves and stop acting like toddlers in… Read more »

PREACH! And I’m upset that internalized sexism has led women to actually listen to these men! Like you said, all their instructions are given to women in an effort for THEM to get what THEY want. They care nothing about our wants, needs, desires, and dreams.

I, for one, do not believe in dressing half naked like some women I see. I do not wear bikinis, Daisy Duke shorts, or clothes that leave my breasts pushed up or exposed . Back when I was growing up ( in the 60s) ‚that’s the way black girls were taught. I see no reason to dress like that; it’s not part of my personal makeup or style. HOWEVER ! That did not stop me & some other girls from being groped by some boys starting in the 6th grade. A gal pal & I actually had to give a… Read more »

Exactly. It doesn’t matter to some men. You can be covered up with no skin showing, and they will still think they’re entitled to your body. Why should all the blame be placed on the women but no one reproaches the man for his actions?

They both raise valid points. No man should grope a woman, regardless of how she dresses, however, why show your tits and ass off if you don’t want sexual attention??? It’s like putting a biscuit in front a child and telling them not to eat it.

I can show my tits and ass off for myself. It’s none of your business.
The same reason you should teach a child not to take what isn’t theirs.

Because wanting to feel or be sexy doesn’t mean you should be assaulted either physically or verbally?? Also, you literally contradicted yourself with the last statement. You can’t compare a child breaking your rules about eating to sexual harassment. Sexual harassment and assault is not a rule someone made up, it’s an act of violence and terror against someone you objectify. But since that’s the analogy you used: if you put a biscuit in front of your child and tell them not to eat it and they do it anyway, won’t they get in trouble? I bet afterwords they think… Read more »

But men aren’t children. They aren’t animals.They’re adult males and should be able to control themselves.

A woman should be able to “show her tits and ass off” (as you say) without having to fear being assaulted or raped or even in extreme cases, being murdered for denying a man’s advances.. It’s one thing to yell indecent comments, but it’s quite another to put your hands on somebody, especially after they tell you no repeatedly. That’s what’s amber Rose is saying.

“it’s quite another to put your hands on somebody, especially after they tell you no repeatedly. That’s what’s amber Rose is saying.” That’s true but not in the real world. In the real world men see a woman who dresses like that as sending them a message that they’re sexually available. The first thing out of folks mouths when you dress like that & then say no to a man is “then why do you dress like that”. Then the woman gets blamed or isn’t taken seriously when they complain. They even have a word for women that do that. They’re… Read more »

OK Although I agree that they should stop policing how women dress when did this become a black men thing? Like I work with non black men in their 50s who have said the exact same thing about clients! lol if you think black men invented this fallacy I have a few history links for you to read lol slut shaming came from europeans centuries ago,was taught to black men and now the unenlightened ones proliferate it.…

Lmbo! YAAAAASSSS I love love love when hypocritical men get called out.