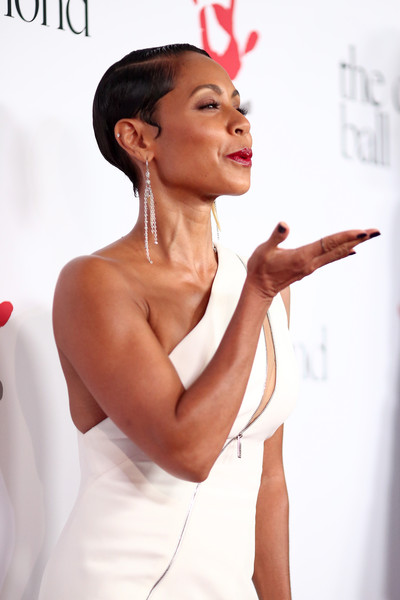 Last year Michael B. Jordan gave an incredible performance in Creed that revived the Rocky franchise. Black director Ryan Coogler co-wrote and directed the film, which had the highest opening week in Rocky franchise history and recently crossed the $100M mark. Idris Elba delivered a stirring performance in the Netflix drama Beasts of No Nation and Will Smith delivered what many felt was an Oscar-Worthy performance as Nigerian doctor Bennet Omalu in Concussion.

But none of these actors or directors were nominated for the 88th Annual Academy Awards, which will be hosted by Chris Rock.

After the nominations were announced, Twitter responded with the hasthag #OscarsSoWhite, and actress Jada Pinkett Smith publicly contemplated boycotting the awards.

At the Oscars…people of color are always welcomed to give out awards…even entertain, (pt. 1)

But we are rarely recognized for our artistic accomplishments. Should people of color refrain from participating all together? (pt 2)

People can only treat us in the way in which we allow. With much respect in the midst of deep disappointment.
J (pt 3)

The committee that votes on who should be nominated for an Oscar is overwhelmingly white and male as DigitalSpy explains.

But who are we actually shaking our fists at when we yell “Damn you, Academy!!!”? Who are The Academy? Who actually makes up this all-powerful body whose approval represents the highest possible accolade one can receive in Hollywood?

The answer is almost exclusively white men. According to a recent survey conducted by The Los Angeles Times, Oscar voters are on average 63 years old. 76% of them are men, and 94% of them are white.

Let’s just take a moment to soak that in. 94% of them are white. For comparison’s sake, the US population is 77.7% white. And in case anyone’s unaware, men and women are split roughly 50–50. 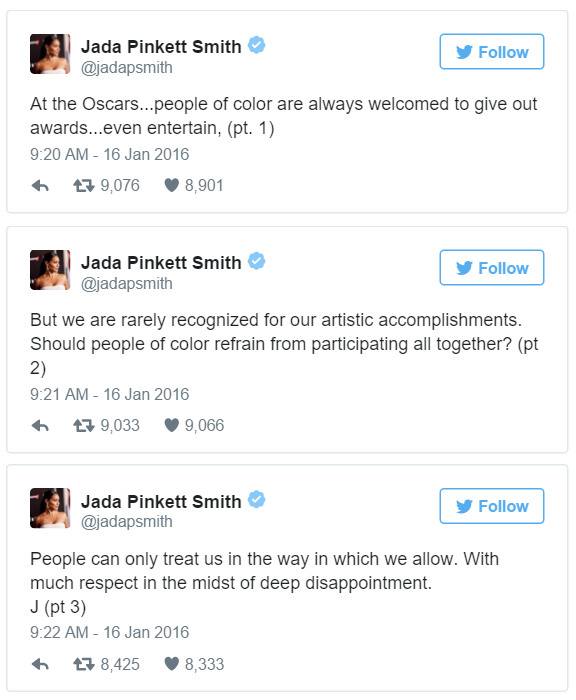 Hollywood is ran by studio executives who are over the age of 63 as stated in the statistics. What their doing is blatantly shallow and racist. Viola Davis even mentioned this before she got on HTGAWM. The actions of the execs kinda mirrors our upcoming election! ?

This is how I feel about these negros not standing up when black people are being killed left and right… We should care about them not receiving a shitty little award because???

THEY should boycott it. I don’t watch any of those award shows, so Im already doing my part for the struggle.

Girl BYE! You are only speaking up on this because your husband wan’t nominated!! I thought Will said and I quote, “I live with constant prejudice, but racism is actually rare — someone who thinks their race is superior,” Have a damn seat Jada! Be parents to your children first!

And Will HAS been nominated twice before! In the Leading Role category. That’s more than most actors even get close to an Oscar!

If I watched award show I would have definitely boycott watching the Oscars but I don’t or every will watch the Oscars. That goes for Golden Globes, BET Awards, and music award shows, none of them.…there boring and tired.

I say stop making their awards paramount. I understand that if you work in their system then you might want to get the awards recognized by them to get more/better work, but if I was an actor, I’d want it to be for films I write, produce, and direct, and then refrain from even taking their awards into consideration. Maybe start out in their system if you have to, make a name for yourself, and then do your own thing. Awards festivals are made all the time, and they can grow in popularity. Frankly, being able to make enough money… Read more »

Personally, I think it’s GREAT that no black movies were nominated by the Academy. The only seems to happen when we’re driving Miss Daisy, having rough sex with Billy Bob Thornton, beating Tina Tuner with a shoe or running running errands as a slave for Scarlet O’Hara. Since the Academy voters are 94% white, 77% male, 86% age 50 or older, with a median age of 62, I doubt their picks will ever be relevant to me. Nevertheless, the fact that they are ignoring us completely is a GOOD thing. It means we’re finally making movies that are not humiliating, stereotypical… Read more »

I don’t watch these shows ie Oscars, Emmy’s, Tony’s. They are boring and I really don’t care that much. I did want to say I believe Jada’s comment was about “people of color” which doesn’t exclusively mean black people like the headline says. I’m pointing that out because I didn’t see any nominees the past two years who are not white. I understand the purpose of this site but I think we need to keep the integrity of Jada’s point. I have heard so many white people say “well they need to make better movies or so better in acting.”… Read more »

Spike Lee’s last movie bombed and that was with plenty of free publicity from the establishment media. Go ahead create your own movie awards . Kind of tough to make a living producing movies that will only be seen by those who buy pirated bootlegs . Maybe that Shonda Rimes pig can emcee your awards show that nobody will ever see. Idiot.

I agree with the idea of creating a Black American movie awards ceremony. Once we do, I can’t wait to see how long it takes for White people to cry about being excluded and “reverse racism” ???

Hollywood overwhelmingly produces, stories about white narratives with white actors. I almost chocked laughing when I read Jada’s comments. It’s like she just woke up and realised she’s black in America. I get the point she’s making but even though i’ve always liked Jada , this call for a boycott gave me a glimpse of why her children are so annoying. She comes across as spoiled and entitled. In a town where there are only 6 top distributing studios no black nominations are not exactly surprising. Boycotting won’t make a difference. Making our own high quality product might but probably… Read more »