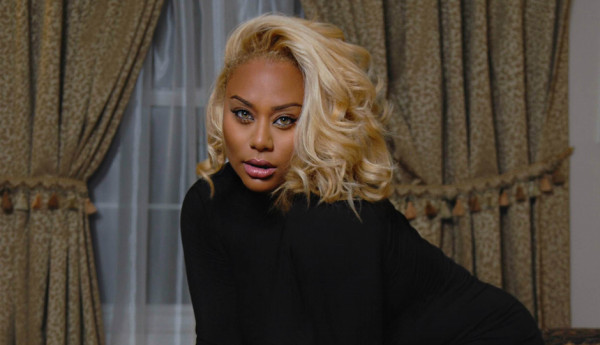 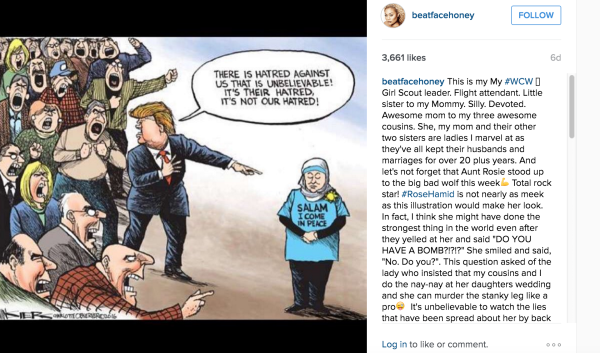 The woman in the cartoon is Rose Hamid, the Muslim woman who was thrown out of Donald Trump rally after she stood in silent protest. She is also Ward’s aunt.

Ward posted the photo on Wednesday evening, and by the next morning she was unable to log into her account,

Instagram told me that my account was frozen, because I had gone against Instagram policy…I clicked to learn more, and it said that my account had been disabled and it listed all of the terms that could cause this. No nudity, no buying likes or followers, and a bunch of other stuff, none of which I had done. Some right wing group must have flagged my page.”

For Ward, who has a following over over 400,000, Instagram is more than just a social media outlet, it contributes to her livlihood. As a result, Ward did not take the suspension lying down. She set up a new account, urging her supporters to contact Instagram on her behalf. A few days later, her original account, including the cartoon in question, was back up. Nevertheless, Ward is still perplexed by Instagram’s initial response.

They need to implement some type of better solution before they shut a page down like that, especially a page with over 430,000 Instagram followers…I’ve represented Instagram well on TV and in magazine interviews, and they need to have a better process and better communication.

*This story originally appeared on PhillyMag.com

There is nothing free about this fucking country

This isn’t new on social media.

If it were hate speech against Black women, it never would have been taken down.

Aint that the truth!!

Instagram is not consistent. Supposedly nudity isn’t allowed but there is plenty on there especially by celebrities. Smh.

Intolerant kooks are racing around the net trying to censor and shut down Black women’s voices—what are they so scared of, by the way? The TRUTH ?? 🙂

And yet, I can log in and find pornographic videos in my feed, from individuals I am not following, nor are following me.…

such a small world. I felt so bad for that woman as she was thrown out for no other reason for being Muslim at a trump rally. Shame on Instagram for freezing BeatFaceHoney’s account for showing love and support for her AUNT

The best thing that could’ve happened to her. This publicity will propel her to the next level in her career. When the Devil throws stones at you, stack them and use em as your stepping stones!