Sunday night, Ava DuVernay dropped a bomb on us:

Tomorrow this #AvaBarbie goes on sale for Christmas because enough folks asked @Mattel to do so. Wild + wonderful. https://t.co/louahFZwjQ

All my proceeds from #AvaBarbie will be sent from @Mattel to @ColorOfChange + @WitnessOrg. A fun way to support. xo! pic.twitter.com/O4Z5zl5els

Excuse me, Ms. DuVernay, what did you say?! The doll, originally released in April 2015 as part of Mattel’s “Sheroes” collection, was made to celebrate women who have inspired girls by breaking boundaries. It was not originally to be released for the masses, but fans requested the doll so much that Mattel finally obliged.

DuVernay is the director of the Academy-Award nominated film “Selma,” as well as the first black woman director to be nominated for a Golden Globe. She also won the Best Director Prize at the Sundance Film Festival in 2012 for her acclaimed feature “Middle of Nowhere.” Her previous narrative and documentary work includes the feature film “I Will Follow” and the documentaries “Venus Vs.,” “My Mic Sounds Nice” and “This is The Life.” In 2010, she founded ARRAY, an independent film distribution and resource organization for filmmakers of color and women filmmakers. With such amazing accolades, it’s no wonder her announcement incited a frenzy on Twitter.

Mattel’s Barbie account confirmed that the doll would be on sale on Monday, December 7th, but did not announce a time, leaving many of us refreshing the Barbie Collector site shamelessly all morning. I, for one was even concerned that they were going to put it up on the site as an auction or list a few that people might be able to win when I didn’t see the doll on the site around 10am Eastern. Then, the Barbie account dropped the knowledge on us: 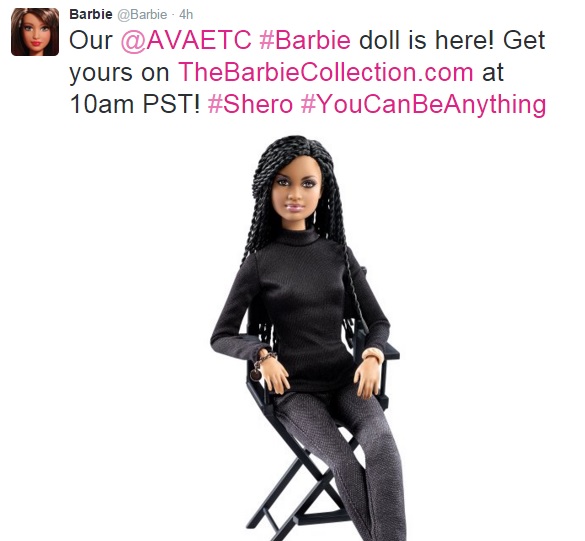 But when 10am PST rolled around, the Ava Barbie was no where to be found on the site — I even refreshed the new items and Barbie pages several times and it was never added to the official listing. Thankfully, a link was sent out, and it was ON. Some people posted a screen shot of the Barbie “waiting list” page, where the traffic to buy the doll was so high that people had to wait to even add it to their cart. This went on for about ten minutes (I think I was able to get in around 1:05 EST) and then it happened: 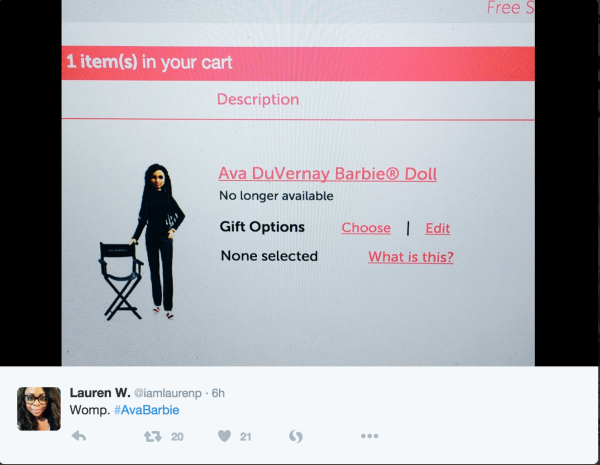 In about 17 minutes, the Ava Barbie had sold out on the Barbie Collector site. I was literally copy and pasting the link on Facebook for my curlfriends and by the time, I pasted it to my post, it was gone. While everyone is extremely happy for Ava DuVernay (this is amazing!), tweets of despair and disappointment ensued:

When it REALLY hits you that you didn’t get that #AvaBarbie pic.twitter.com/OqnWE3d8OL

#AvaBarbie is the new Jordans. They sold out so fast… pic.twitter.com/9eFPhNbKoV

And of course, it wouldn’t be Twitter without a little bit o’ shade:

Tried to buy the #AvaBarbie and it sold out, is this how that white girls felt about Kylies LipKit?

Mattel did give consumers some hope after announcing that the doll would be available on Amazon later in the day, but there it sold out almost as fast (and it probably would have been faster if more people knew about the link before they tweeted it).

While the situation is disappointing for those that missed out, it’s also awesome. A black doll dressed in casual clothing with locs (Ava has locs but the doll’s hair looks like twists, but seriously, no biggie) basically shut down the Barbie Collector site in a matter of minutes and has taken Twitter and the media by storm. Hopefully, this exercise in #BlackGirlMagic will show Mattel that yes, diversity does sell, it’s important, and that our support is strong when it’s warranted.

Note: The doll is also available on eBay, but honestly, unless you REALLY need one, I wouldn’t bother indulging the eBay scalpers who bought the doll for the sole purpose of selling it on eBay. They went up minutes after the doll was sold out on the Barbie site, some for $200+, and they obviously don’t even have the doll in their hands yet. Vultures.

What do you think of the Ava Barbie?

I really like My Mic Sounds Nice and Middle of Nowhere.