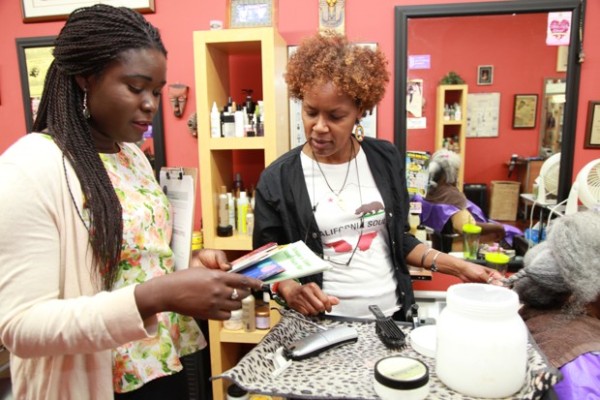 With the increase of black women ditching relaxers in favor of going natural, we might forget that thousands of professionals still spend their careers working around harsh relaxer chemicals. UCLA graduate student Teni Adewumi is leading the charge to ensure safety in black hair salons. Adewumi surveyed black salon workers in Inglewood, CA and saw a pattern in the types of ailments (asthma, dermatitis, hair loss, uterine fibroids, miscarriage) many salon workers developed:

Veteran stylists told her they experienced symptoms when they applied relaxers and other chemical hair straighteners, and they now preferred working with natural styles. But many didn’t know that the products they used could be making them sick.

Whether it be a perm, texturizer, dye job or brazilian blow-out, the long term effects of the chemicals used to create these styles have yet to be thoroughly researched:

“When we held focus groups with salon workers, we found these stories of lack of education on chemical exposures and chemical-related health problems,” Adewumi says. “Even though they had all gone to beauty school, there was just really no training around what these products could do to your body and to your reproductive system.”

Exposure to these chemicals can have lasting effects:

Safiyyah Edley, the owner of the Luv Mi Kinks salon in Los Angeles, CA, grew up helping in her aunt’s hair salon as a small child. She’s been in the hair salon business for more than 20 years and began operating a “natural” salon that doesn’t use chemicals, for more than a decade. “Last year, I was diagnosed with uterine fibroid tumors,” Edley said. “I was diagnosed at the same time that they told me that I had miscarried. The thing that was very striking is that I’ve been a natural hair stylist for ten years. I haven’t done major relaxer treatments in ten years, and I do deal with some coloring, but the effects last for years.

On why there isn’t more research done on the chemicals used in black salons:

Before the 1990s, women and minorities were consistently underrepresented in clinical studies, due in part to the assumption that research on male subjects could be extrapolated to these groups. Scranton says that the disparity is especially stark when it comes to women of color: “I could find almost no studies on salon workers who either are women of color or work with women of color, and work with the different products that are marketed to women of color—the hair relaxers, certain kinds of dyes, the hair glues for extensions,” she says. “These are some of the products that seem to contain the most toxic chemicals, and no one has studied them.”

To make matters worse, manufacturers in the United States aren’t required to list all of their ingredients on professional salon products.

Aside for pushing for legislation to require manufacturers to provide transparency for their products, Adewumi is working alongside Women’s Voices of for the Earth to educate salon owners across the country on best practices to limit their exposure to potentially harmful salon products and practices.

Have any of you had conversations about salon chemicals with your stylist?

I never had a conversation with my stylist about what they were using. I just …Not now…let them.put the creamy crack on my hair. It smelled awful and burned! Heaven forbid if I scratched my scalp a few days prior!!! I saw an.article a few years ago about relaxers and.fibroids. It said there may be a link to relaxers causing fibroids. I was stunned! We DON’T even know.100% what’s in.those relaxers and I was using a no lye relaxer which the stylist said was.worse? Geez, now that I have fibroids and getting everything “yanked out” in.January 2016, I wonder if… Read more »

My mother-in-law was a hair stylist for 40 years. Never wore gloves to put relaxer in clients hair because she wanted to be able to feel the texture as she worked it in. Her hands became black and she has had cervical cancer twice. Fortunately, she was truly blessed to over come both times because of her commitment to her health and natural healing.

Correlation does not mean causation. While I have no doubt that chemicals in salons or anywhere else for that matter can and do cause disease, rampant speculation is no more scientific than lack of evidence. Black women are more prone to fibroids so their appearance along with the use of relaxers means little. Although I do agree that there needs to be more thorough research into chemical laden cosmetics that we use.

This is sad but doesn’t surprise me. Most of those harmful products aren’t from black owned companies but we are the intended consumer. Relaxers and skin lightening products should not be trusted and for all we know come from the same people who created Ebola and Aids. I hope this is further investigated and there is a class action lawsuit.