On October 12 comedienne and talk show host Ellen Degeneres ran a clip parodying Nicki Minaj’s upcoming ABC Family sitcom. Minaj is set to appear in and executive produce a show about her childhood in Queens, NY after her immigration from Trinidad and prior to international fame. The Ellen skit features a black family — a little girl, mother, father and pet dog — set against a Cosby-esque backdrop. The joke? They all have very large, prosthetic behinds that are constantly knocking things over.

As soon as it was released, the question on everyone’s mind was ‘Is it racist?’ Is it reminiscent of 1840s slavery-era minstrel shows that “lampooned black people as dim-witted, lazy, buffoonish, superstitious, happy-go-lucky, and musical.”

Blackface minstrelsy was the first theatrical form that was distinctly American. During the 1830s and 1840s at the height of its popularity, it was at the epicenter of the American music industry. For several decades it provided the means through which American whites viewed black people. On the one hand, it had strong racist aspects; on the other, it afforded white Americans a singular and broad awareness of what some whites considered significant aspects of black culture in America

Nicki herself has been quiet about the debacle, even as discussion has raged. And it seems the internet is squarely divided. From MadameNoire.com;

Making fun of Black people with big behinds is not only trite, it has roots in some very painful history. It seems like Black women’s websites are always referencing Sarah Baartman and it’s skits like these that prove we still need to be saying her name.

Someone likened the skit to a minstrel show and I see no lies.

While Nicki Minaj proudly displays and even draws attention to her derriere, it is not all there is to her. And a prosthetic behind on a little Black girl, a child, for public viewing and entertainment is just not ok.

There are those who don’t see a problem with the skit because of Nicki’s own brand but I shudder to think what the response would have been if a Jewish girl’s family was lampooned because of their large noses. Caricatures and depictions, particularly when they’re being crafted by non-Black people, are vitally important as they can do a lot of social and psychological damage.

Now here’s where things get complex. Nicki Minaj’s surgically enhanced bottom is key to her image. She often raps about it. She called out the VMAs for not considering her very booty-centric Anaconda for video of the year. 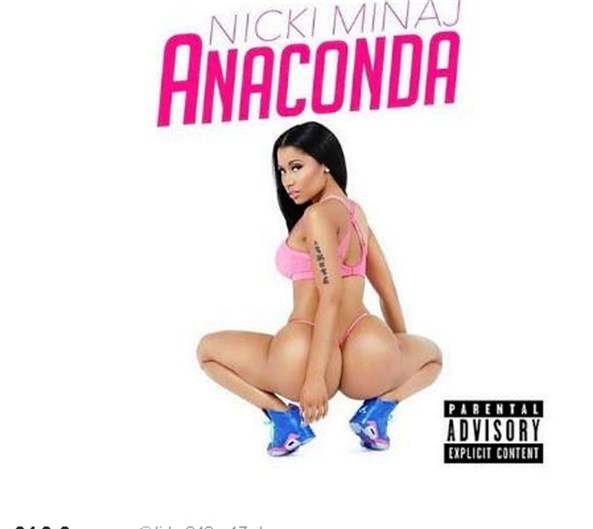 And, although many black women expressed concern, she praised the booty-in-the-air-down-on-all-fours positioning of her Madame Tussauds wax figure, and was silent on the subsequent defiling by museum guests that followed — even as the museum apologized.

African Americans formed a large part of the black minstrels’ audience, especially for smaller troupes. In fact, their numbers were so great that many theater owners had to relax rules relegating black patrons to certain areas. Theories as to why blacks would look favorably upon negative images of themselves vary. Perhaps they felt in on the joke, laughing at the over-the-top characters from a sense of “in-group recognition”. Maybe they even implicitly endorsed the racist antics, or they felt some connection to elements of an African culture that had been suppressed but was visible, albeit in racist, exaggerated form, in minstrel personages. They certainly got many jokes that flew over whites’ heads or registered as only quaint distractions. Another draw for black audiences was simply seeing fellow African Americans on stage; black minstrels were largely viewed as celebrities. Formally educated African Americans, on the other hand, either disregarded black minstrelsy or openly disdained it. Still, black minstrelsy was the first large-scale opportunity for African Americans to enter American show business. Pat H. Chappelle (1869-1911) capitalized on this and created the first totally owned Black Vaudeville Show, The Rabbit’s Foot Comedy Company, with an all-black cast of great performers that elevated the level from minstrel to sophisticated, fun comedy, and successfully toured mainly the southwest and southeast, and performed also in New Jersey, and New York City.

Some internet commenters felt that, indeed, Nicki Minaj had brought the parody on herself;

I would care if she didn’t go out of her way to make her entire public image about her behind.

As a black comedian I see the humor. Was it knee slapping funny? No, but I won’t call it racist. Nicki literally built a huge part of her career based on her @$$ and no one is allowed to make fun of it? If this were Kenan Thompson dressed in drag as Nicki on SNL would the same people still be offended? Or is it because Ellen who is also a comedian happens to be white?

Since Nicki wasn’t born with a naturally big butt, to me I clearly see that Ellen is making fun of Nicki’s butt being stupid big & super fake.

I GET that this is humorous or suppose to be. I’m all for a good laugh and not taking myself too serious. I don’t think they care or thinking what impact this makes. For sooooo long, we have been laughed at, pointed at, copied, and ridiculed for our bodies. Bottom line is money and residual checks!

Here we go. Now let’s not be the pot calling the kettle black. When it’s black people mimicking white people or Asians or Hispanics, we all think it’s hilarious and whatnot. But as soon as a nonblack person mimicks black folk, questions of racism and prejudice and wrong come up. All this hyprocrisy needs to stop. My goodness.

The dog though?! Lolol. I guess. It appears to strike up the old saying, “the kettle calling the pot black” concerning whether or not it’s racist. Why is it always an issue or made into a racial issue when it’s a nonblack mimicking black people? Yet, when black people do the exact same thing, it’s funny, hilarious, jokey-joke, not racist, payback, etc., etc.? Folks, get over it. This skit was not racist. It wasn’t “rolling-on-the-ground” funny, however, I found no hints of racism as I watched it; and comparing it to minstrel comedy is overreaching IMO. Everything is not racism… Read more »

I agree. If this had been making fun of someone’s natural body I would have found it offensive. The implants themselves are more like a minstrel show than that clip. Butt implants aren’t part of blackness and it’s unreasonable to expect people to not make fun of them.

Thank you for saying that part about implants not being a part of blackness. So TRUE!!!!

Yes, a non-black person can’t imitate or spoof a black person with the racist tag being thrown. Its getting crazier by the day. A black youtuber used a make up tone for whites and a white youtuber did the reverse, and people were accusing the latter of blackface. Its crazy how some think.

i mean…she kinda made herself the laughing stock when she went and had ass implants that are way too big for her frame put in. & it’s not like we have pre-ass injections photos either. making fun of her ass is no different that making fun of kim k’s ass, katt stacks ass, and countless others. they all look crazy.

Nicki Minaj is a walking, stripping, booty shaking minstrel show in her own right. Nothing Ellen does can top the embarassment Nicki brings to herself every single day. Why all the self-righteous indignation? Her butt’s not even real!

In the perspective of Ms. Minaj, if you can’t take a joke, don’t be one.

Not at all! If it had been “Serena Williams” they parodied then I could see the argument being valid.