TextureMedia and NaturallyCurly.com Have Been Acquired

In late September, a little quiet news began making the rounds on business and press wires:

If TextureMedia sounds familiar, that’s because it is. TextureMedia is the brainchild of Michelle Bryer and Gretchen Heber and parent company of NaturallyCurly.com. Curl Mart, and CurlyNikki.com. Naturally Curly launched in 1998, and in the past 17 years has grown to become a premier online destination for women with curly hair to connect, share advice, purchase products, and more.

When I became aware of the acquisition by Ultra/Standard, I didn’t think much of it. It didn’t pull at my conscience and my heartstrings as much as something like the Shea Moisture partnership with Bain Capital did. Much of the lukewarm traction is due (in my opinion) to TextureMedia’s strategy, which ran counter to Shea Moisture’s when revealing the news.

Because of Shea Moisture’s history as a Black, family-owned brand, they knew there would be resistance, anger, and even hurt feelings when news broke. They strategically chose to shut down the opportunity for rumors to circulate, by setting the record straight – even going so far as to host a live Google Hangout (with NaturallyCurly.com) in which their CEO tackled the tough questions and concerns that flooded social media.

On the other hand, TextureMedia has remained relatively quiet, without so much as even an article on NaturallyCurly.com about the acquisition. 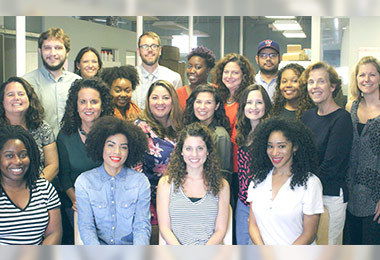 Who or what is Ultra/Standard? Why did they buy out TextureMedia? And what does this mean for the future of sites like CurlyNikki and NaturallyCurly.com?

Let’s deep dive and find out.

Ultra/Standard is no stranger to textured haircare. Founded in 1970, Ultra/Standard has served as a leading consumer goods distributor of multicultural beauty brands to major retailers such as Bed Bath & Beyond, Rite Aid, Sally’s, Target, and Walgreens. Ultra/Standard’s primary focus is helping brands build out their distribution to serve the growing multicultural population segment, with a focus in hair care, hair color, shave, and skin care products. Some of the familiar brands represented by Ultra/Standard are household names for naturals, like As I Am, Camille Rose Naturals, CURLS, Kinky-Curly, Mixed Chicks, and Shea Moisture.

So why the interest in TextureMedia? According to Ultra/Standard President Michael Ross,

“TextureMedia possesses a honed ability to connect with the multicultural beauty consumer and a demonstrated track record of building brands and recognizing opportunities within this ever-expanding beauty category. This union reinforces the importance of cultivating a closer relationship with the end consumer and creating two-way dialogue that is imperative to our brands’ collective growth.”

In essence, through TextureMedia’s various platforms and forums, they’ve positioned themselves as a key player with a demonstrated ability to connect businesses and consumers. With Ultra/Standard’s acquisition of TextureMedia, the company now has the means to produce a 360 degree platform to cultivate conversations between retailers, brands, and consumers.

In the end, what does all of this mean for TextureMedia? According to this statement, NaturallyCurly and CurlyNikki will continue to produce unbiased editorials about brands and retailer offerings. Their community-oriented perspective, honesty, and integrity are to not be compromised. TextureMedia intends to leverage the financial support of Ultra/Standard to bolster their visibility, continue to empower, engage, and educate globally, drive conversations around ingredients with brands and retailers, and provide consumer insights to help brands and retailers better serve customers with products and brands that we actually want.

The part of this acquisition that strikes me as the most interesting is that as a distributor of products specializing in textured hair, Ultra/Standard is in the business of creating points of access for consumers. Ultra/Standard is behind getting some of the very familiar aforementioned brands into retailers we frequent, like Target and Sally’s.  How often have you wished these stores would carry certain brands to eliminate the hassle of online shopping or waiting for your holy grails to arrive in the mail? I’d love to waltz into Sally’s and stock up on Be Kekoa, Hydratherma Naturals, or Soultanicals products.

If the Ultra/Standard acquisition operates as promised by TextureMedia, those opportunities may not be far-fetched. As a part of Ultra/Standard, TextureMedia is supposed to operate as an advocate for consumers in the retailer space. The goal is to facilitate increased access to more products formulated for textured hair across major retailers. I for one hope this means more access to established and emerging beauty brands created for and by the natural hair community, not more access to brands that up and decide that we suddenly matter as a demographic. I would love to see TextureMedia leverage their relationships and cultivate new ones that would empower more Black-owned small business brands the opportunity to grow, scale, and gain nationwide distribution.

One thing’s for sure – it will be interesting to see what changes emerge in the retail space in the coming months.

What are your thoughts on the Ultra/Standard acquisition?

Born, raised, and living in Los Angeles, Christina is BGLH's resident transitioning expert and product junkie. In addition to loving all things hair, she is a fitness novice and advocate of wearing sandals year-round. For more information on transitioning, natural hair, and her own hair journey, visit maneobjective.com. Or, if you like pictures follow Christina on Instagram @maneobjective.

I could care less tbh. This just looks like an additional segue to make the natural hair movement (which is exclusive to black women) about everyone. Im not here for it. I will continue to support black owned hair products.

can't we own anything
Reply to  Ms. Vee

exactly.…I hope UnckeFunkysDaughter does not cave like the others.…anyone know if Karens’ Body Beautiful still black owned.…BGLH do another investigative article of STRICTLY black owned natural hair companies. …these mergers(or takeovers) with white companies are giving me a headache.…thanks

Karen’s Body Beautiful is definitely still black owned. I was actually just with her at the Circle of Sisters event in NYC,

Best of luck to TextureMedia. I have to admit that I will never understand the desire to be acquired.

Anything to keep black people from loving themselves. Why is it there now this extreme purpose to unify everyone from every race that doesn’t have bone straight texture as soon as a natural hair movement becomes popular among among black women and young girl? These are the same white people who will tell you in a heart beat we want their hair which I’ve never seen sold at any beauty supply store. Texture media has supposedly been around since 98 but not to long ago want to be inclusive. Well I don’t want to be inclusive with you or who… Read more »

The founders of the company are not African American (unless my eyes deceive me…) Therefore, this is just another acquisition like any other acquisition in the founders’ eyes. There is no cultural lense to take into account, unlike with Black owned companies that sell out to companies that will not treat our cultural interests with integrity. They did not start their first company for African Americans… it was for their curly hair. We came along later. I don’t expect allegiance from them, unlike a company that was by us and for us. They included all types of hair in their… Read more »

[…] about nc. reading it, it makes total sense about the direction this website has been going in. TextureMedia and NaturallyCurly.com Have Been Acquired | Black Girl with Long Hair [FONT=“Arial Narrow”] 3a, some 2c & 3b, medium texture, porosity normal, low […]