“Women Blame Women For Things That Have Nothing to Do With Them”; Nicki Minaj Walks Out of NYT Interview

Well, there is one thing that can be said of the Nicki Minaj’s New York Times feature — it is certainly complex. Nicki Minaj is a divisive figure but she also has a very clear voice when speaking about the marginalization of black women in pop culture and generally unfair expectations of women. Her interview has lots of folks talking because it ended with Nicki reprimanding reporter Vanessa Grigoridis and walking out after being asked an inexplicably sexist question. We read the whole thing and here are the highlights (all emphases ours).

A month later, the episode was still bothering Minaj. Addressing Cyrus, she told me: ‘‘The fact that you feel upset about me speaking on something that affects black women makes me feel like you have some big balls. You’re in videos with black men, and you’re bringing out black women on your stages, but you don’t want to know how black women feel about something that’s so important? Come on, you can’t want the good without the bad. If you want to enjoy our culture and our lifestyle, bond with us, dance with us, have fun with us, twerk with us, rap with us, then you should also want to know what affects us, what is bothering us, what we feel is unfair to us. You shouldn’t not want to know that.’’ 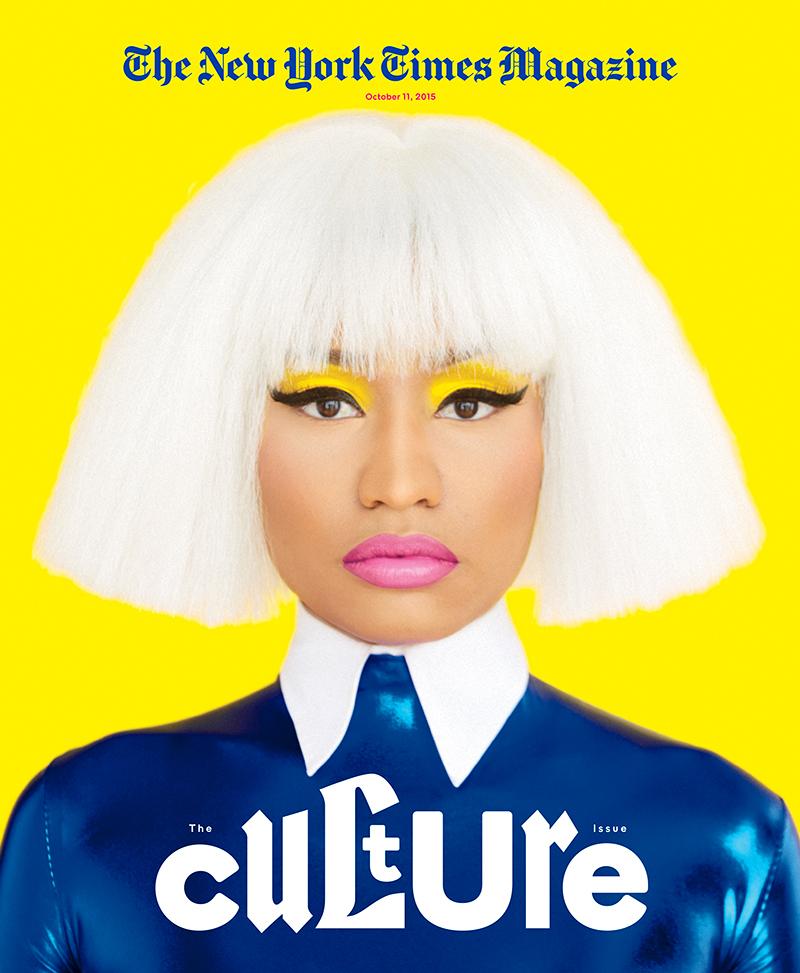 On feeling insecure about her body…

“But when asked if she felt confident in her looks as a kid, she said, ‘‘Hell, no!’’ She paused. ‘‘Now, I want to take steps to become more aware of who I am, what I like or dislike about my body — why is that?’’ she said. She mentioned how insecure she felt on Instagram, ‘‘where everyone is freaking drop-dead gorgeous.’’ Don’t get her wrong, she said: Like most celebrities, she approves the pictures that appear on her Instagram and other social-media accounts. ‘‘I get that people put filters on their pictures — I definitely use filters — but I didn’t know people retouched,’’ she says, excitedly talking about being in a nightclub the other day, taking pictures with a friend, and how the friend ‘‘cleaned all the sweat off our face’’ before she posted the photo. ‘‘We’re in a club! We can have a moist, dewy-looking face.’

She laughs for the first time in our conversation, dimples popping everywhere, sun radiating through the room. ‘‘People’’ — famous people, she means — ‘‘are posting pictures of working out, and then there’s a change in their body” most likely from plastic surgery, “and they say it’s because they were working out! Ah-hahahaha.’’ Then she turns serious again. ‘‘Back in the day, in hip-hop, the thick girl was glorified. Now the rappers are dating skinny white women. So it’s almost like, ‘Wait a minute, who’s going to tell the thick black girls that they’re sexy and fly, too?’?’’
”

Now here is the pink elephant in the room — Nicki has had extensive work done on her body. We don’t say this to shade or to clown. It’s just the reality. Photos of Nicki pre-fame show no evidence of the juicy, round bottom and wide hips that are integral to her image.

This fact did not escape rapper Azealia Banks who called Minaj out in a series of tweets; 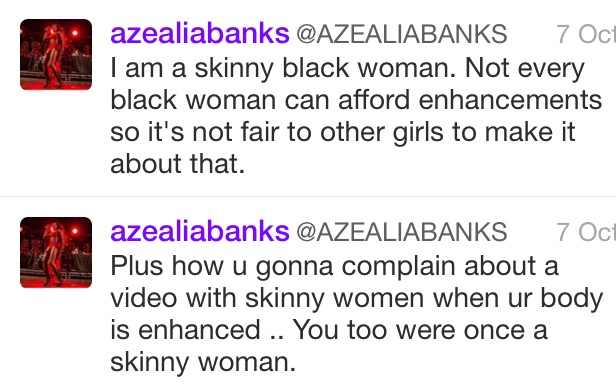 And finally, on sexism (the point at which Minaj walks out of the interview)…

Grigoridis asked if Nicki ‘thrives on drama’, referencing the beef between her labelmate Drake and boyfriend Meek Mill, as well as her label heads’ (Lil Wayne and Birdman) court battle.

Then I asked about the dramatic goings-on at her label: Wayne is suing Birdman for $51 million for withholding fees, and Wayne’s tour bus was riddled with bullets in Georgia earlier this year. A federal indictment claims that individuals connected to another Cash Money rapper, Young Thug, may be responsible.

This was not the game Minaj was here to play — interviews in the social-media era are about being adored, not interrogated. It was getting dark outside when I asked about Drake, Meek, Wayne and Williams. Minaj hadn’t turned on lights, so she was in shadow. ‘‘They’re men, grown-ass men,’’ she said. ‘‘It’s between them.’’ How does it make you feel, I ask? ‘‘I hate it,’’ she said. ‘‘It doesn’t make me feel good. You don’t ever want to choose sides between people you love. It’s ridiculous. I just want it to be over.’’

‘‘Is there a part of you that thrives on drama, or is it no, just pain and unpleasantness—’’

The room went quiet, but only for an instant.

‘‘That’s disrespectful,’’ Minaj said, drawing herself up in the chair. ‘‘Why would a grown-ass woman thrive off drama?’’

As soon as I said the words, I wished I could dissolve them on my tongue. In pop-culture idiom, ‘‘drama’’ is the province of Real Housewives with nothing better to do than stick their noses where they don’t belong. I was more interested in a different kind of drama — the kind worthy of an HBO series, in which your labelmate is releasing endless dis tracks against your boyfriend and your mentor is suing your label president for a king’s ransom. But the phrase I used was offensive, and even as I tried to apologize, I only made matters worse.

‘‘What do the four men you just named have to do with me thriving off drama?’’ she asked. ‘‘Why would you even say that? That’s so peculiar. Four grown-ass men are having issues between themselves, and you’re asking me do I thrive off drama?’’

She pointed my way, her extended arm all I could see other than the diamonds glinting in her ears. This wasn’t over yet. ‘‘That’s the typical thing that women do. What did you putting me down right there do for you?’’ she asked. ‘‘Women blame women for things that have nothing to do with them. I really want to know why — as a matter of fact, I don’t. Can we move on, do you have anything else to ask?’’ she continued. ‘‘To put down a woman for something that men do, as if they’re children and I’m responsible, has nothing to do with you asking stupid questions, because you know that’s not just a stupid question. That’s a premeditated thing you just did.’’ She called me ‘‘rude’’ and ‘‘a troublemaker,’’ said ‘‘Do not speak to me like I’m stupid or beneath you in any way’’ and, at last, declared, ‘‘I don’t care to speak to you anymore.’’

Ladies, what do you think of the Times interview?

Good for her! Why should she be concerned about the conflict of other people? Does she really think Nicki is the source of this conflict or that she encourages it? It was a terrible thing to ask a powerful and influential BUSINESSperson. Nicki has been fed up with this for a long time and has commented in the past how her male counterparts are able to blow off appointments or submit subpar work without criticism. But the minute she stands up for herself, gets labeled “difficult to work with” or “a bitch.” Good or bad, though, it affects her standing… Read more »

I completely agree with Nikki in this instance. What did those men have to do with her. Even Meek Mill’s beef is none of her concern because he’s old enough to take care of himself. It absolutely was a rude line of questioning and LAZY journalism. When in doubt goad the black woman into trifles. Pitiful. Pitiful. Pitiful!

Yes I agree with Chevanne GOOD for you Nicki! Because any other answer would have been used against her creating more crazy drama!

Good for Nicki! So proud of her defending herself. That was a completely asinine question and if the journalist was so pressed she could ask the men about their “drama”.

Yes there is such a thing as a stupid question

Not necessarily a fan but I like that she takes no guff off people. She speaks her mind and let’s people know how she feels. She’s not one to be messed with.
I loved how she called out Miley Cyrus at that awards show. LOL

Nicki was correct,the question was offensive and senseless

I side with Nicki I know nicki expects to be asked about the beef but after she said she doesn’t like it the fact that the reporter continued to press her about the situation asking an idiotic question was ridiculous. The interview was about her and not those four grown-ass men .

Nicki did the right thing! We have to teach people how to treat us. Everyone has an issue with Nicki, but the issue is how people are treating us. They expect us tone down and relax and take whatever they give us. No thank you ma’am, keep it moving. Thank you for sharing this post!

okay, this just made me like Nicki a little. That qestion was just odd. What did this woman mean to imply by it? Why would Nicki thrive of off other people’s drama? I don’t know what she was trying to find out, or say but she probably should have phrased it better. Nobody asks Britney Spears if she thrives off drama and she has had more drama in one day of her life than most people ever have.

you just don’t ask question like that unless you are looking for trouble…you should have stick to what you not clever head .

She admits that “drama” was a bad word choice but the entire premise of the question was horrible. Why ask her if she thrives on anything having to do with those disputes when she just told you she hated it?

that appropriation quote from the miley part is way too on point. never thought i’d connect with something minaj said so much. people always want to collect the cool points from doing things associated with black culture but never care about how we feel about it. and heaven forbid you speak up about it.

YAS Nikki! I love how she is able to intelligently defend herself and highlight what the problem is.

Minaj is one sharp cookie with a long, good future ahead of her. She’s got the right values for it.

I love and respect Nicki, I know (and expect) that she is going to be her through and through. She isn’t taking bs or letting disrepectful sh.. fly. Her attitude and demeanor have gotten her far in the game for a reason. She makes me proud to be fan. Stand up for you and don’t take the sh.t. Demand respect. Good Job Nick.

I’m no fan of Nicki Minaj but she was right here. That was a sneaky, sh*t starting, sexist question to ask. I’m glad she called the interviewer out on it.

I side with Nicki. The question made no sense and was offensive . The journalist’s explanation of what she meant doesn’t help either.

The more Nicki talks, the more I come to adore her as a person. She’s emotionally real, brutally honest, and to-the-point.
Every word makes me a bigger fan.