In This Dominican Village, Girls Biologically Turn Into Boys at Age 12 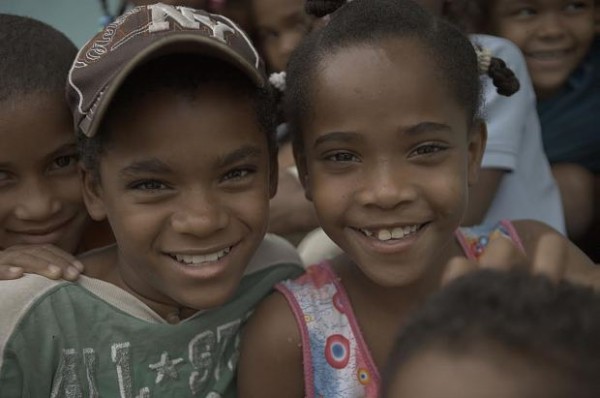 This is not science fiction. It’s a fascinating case of genetics!

In the Dominican Republic village of Salinas babies are born with no visible penis or testes, and what appears to be a vagina. As puberty sets in around age 12, these ‘girls’ begin to grow a penis and testes. Prior to this transformation they live their lives as girls, and their parents do not know whether they will transform (it is impossible to tell from just looking.)

The transformation is so common and accepted that these gender-shifting youth have a name, ‘guevedoces’, which translates to ‘penis at 12’. Many boys even keep their female name.

A little girl named Carla is currently going through the same transformation, aged nine. Despite being brought up as a girl, his mother noticed that from the age of five he was more inclined towards the rough and tumble play of little boys. He has recently had his hair cut short after wearing plaits for years.

Many decide not to change from their female names, so some men in Salinas have names like Catherine.

But how does this happen?!

The rare genetic disorder occurs because of a missing enzyme which prevents the production of a specific form of the male sex hormone — dihydro-testosterone — in the womb.

All babies in the womb, whether male or female, have internal glands known as gonads and a small bump between their legs called a tubercle. At around eight weeks, male babies who carry the Y chromosome start to produce dihydro-testosterone in large amounts, which turns the tubercle into a penis. For females, the tubercle becomes a clitoris.

But some male babies are missing the enzyme 5-?-reductase which triggers the hormone surge, so they appear to be born female with no testes and what appears to be a vagina. It is not until puberty, when another huge surge of testosterone is produced, that the male reproductive organs emerge. What should have happened in the womb happens around 12 years later. Their voices deepen and they finally grow a penis.

This phenomenon also has a high occurrence in the Papua New Guinean village of Sambia, although it is not as accepted.

You can read more about this fascinating phenomenon here and here.

Wow.. Imagine growing up thinking that you’re a girl for 12 years :O and then BAM you become a male.. just wow. So for 10–12 years, you have to deal with the suspense that you might become a man or stay a girl..

what on EARTH.…that’s so wild

I thought this article was a joke at first. Very interesting.

i still don’t believe this

Wow that is crazy and fascinating.

So cool! I’ve seen this before — when I worked at the National Aquarium, staff had to wait for years before we determined the sex of our resident sea turtle. Like these children, its sex was genetically predetermined, but not physically apparent. We could have found out easily with a blood test, but the surprise was more fun.

that’s why i’m like wth? baby girls are born with eggs.. they could scan or take a blood test. smh

This is fascinating. Never heard of this before. Great article.

the end is near guys.…

Or the start of something good.

This is very interesting! I was even more interested when I learned about this over 10 years ago in my Women’s Study class. I guess I’m just curious as to …what the point of the article is in reference to the site.

BGLH isn’t only a site about natural hair. Honestly, I now visit this site for the cultural articles more than the hair-care posts.

Oh I know, it’s why I’m a big fan of this site in general. This, however, is an utterly random article. Most of their cultural articles have some sort of foundation tying into their over all site.

Hmmm, I wonder if there is something environmental going on in this region of the country keeping the parents from producing whatever they need during the pregnancy stage.…..otherwise, why else would the rate be so high in one specific area? Unless it’s a genetic deficiency of some kind and the families in that particular area are some how related. :/

Please change the title of this article to read Dominican Republic, this does not relate to the Caribbean island of Dominica!

What!? I knew I always loved biology, especially genetics. Fascinating stuff. I just got schooled today! Thanks for sharing, Leila.

I’m from there, and I have never heard about something as absurd as this!

Why is it absurd?

Torro
Reply to  The Darling Kinkshamer

Because she’s domincan and the average hates themselves.. They don’t even identify as black when it’s obvious by looking at them. Even the ones who claim 100% heritage genetically are 95% black. But she won’t admit that.

The Darling Kinkshamer
Reply to  Torro

You are correct! Dominicans despise their African ancestry, which is why they treat Haitians poorly. It’s really sad and eff’d up!

Fascinating! This is one of those wonders of the world.

Wow!!? I had never heard of anything like this before in my life. Quite interesting to know that such a thing can happen.

Lol, in the article they said they are born with what looks like vaginas. Plus, whether male or female we all start as daughter cells.

never mind, I finally read the rest of the article.

According to the wording and the way I interpreted this, this would involve chromosomes changing after they were born. You just can turn from one sex to another. We’re not clown fish. They were born genetically male. If anything, this sounds like they’re intersexed to me.

The More You Know
Reply to  kia

Nah, chromosomes don’t change after birth. They are genotypically( actual sex chromosomes given by parents) male. They are not female (XX) at all or intersex. What happens is they have the chromosomes XY which is male. They are phenotypically (physically shown characteristics) shown as female because the lack of penis. However, in this case it has nothing to do with the sex chromosomes but the hormones or amount of hormone(s) being released while in the womb or after birth. To make it easier, say that you are suppose to receive 1 L of this type of testosterone if you are born XY… Read more »

kia
Reply to  The More You Know

i’m not about to read all this. sorry.

Whaat? That is so fascinating I’ve never heard of such..pretty interesting. I wonder if there is more respect between the genders because of this disorder? I have more reading to do!