Heathcliff Huxtable was the father of my dreams. As a child, I would imagine myself as one of Rudy’s friends, sitting on his knee with my arms outstretched and palms upward, while he jostled me about making airplane sounds and cheering me on. I still smile thinking about it, even today.

I grew up in a two-parent household. My parents were present, of course, but they were two hard-working immigrants primarily focused on ensuring my siblings and I were fed and clothed. They were not the most patient, however, and they most certainly did not entertain us with tickles and zerberts. 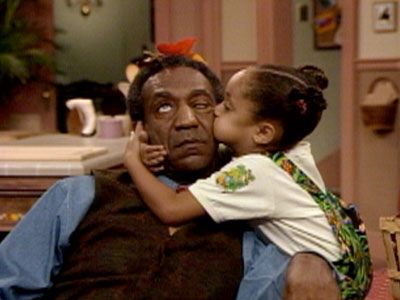 Indeed, for many of us, the Huxtables were more than a TV family. They were our family, creating for us an unbreakable image of the quintessential black family. We grew up with them. We learned from them. We love them. As a result, we are fiercely protective of them, and rightfully so. The legacy of The Cosby Show is undeniable.  The Huxtable family represented black culture and identity during a time when the idea of black excellence was under attack on every front:

“The Cosby Show debuted during the Reagan era, when the plagues of crack, AIDS and spiraling homicide were ravaging African-Americans,” says author Jelani Cobb, associate professor of history and director of the Africana Studies Institute at the University of Connecticut. “[The show was] huge among Black people because it was a counterpoint to the stream of negativity that we heard and saw about ourselves so frequently during those years” 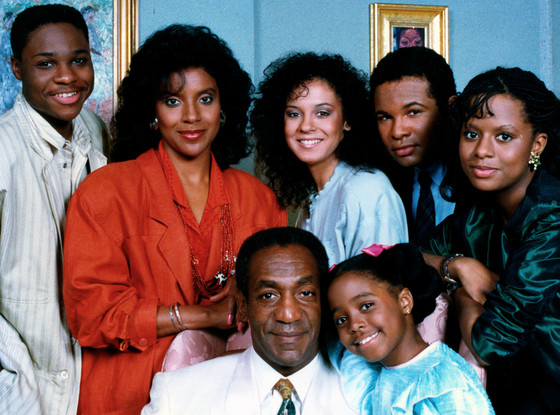 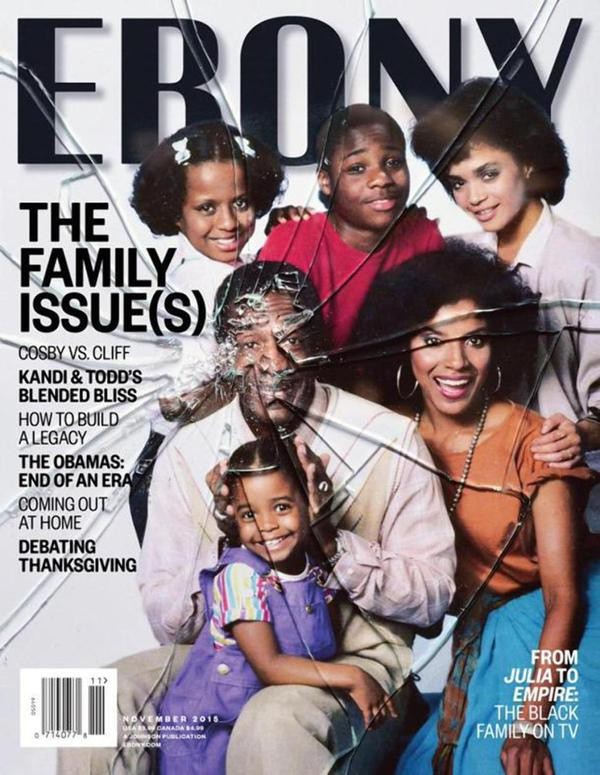 This image is painful, almost gut-wrenching, with shards of broken glass spreading even to little Rudy’s face. No one is spared, not even us.

This cover is taken from Ebony Magazine’s November issue, wherein readers are asked to confront the conflict of Bill Cosby vs. Healthcliff Huxtable. Bill Cosby stands accused of sexually assaulting at least 50 women, using quaaludes to incapacitate them prior to the assault. Readers are also asked to interrogate the idea that Bill Cosby, much like his character, firmly believed that the black condition in America is chiefly tied to moral decay within the black community rather than external forces:

Looking at the incarcerated, these are not political criminals. These are people going around stealing Coca-Cola. People getting shot in the back of the head over a piece of pound cake! And then we all run out and are outraged, ‘The cops shouldn’t have shot him.’ What the hell was he doing with the pound cake in his hand?…People putting their clothes on backward: Isn’t that a sign of something gone wrong? People with their hats on backward, pants down around the crack, isn’t that a sign of something? …With names like Shaniqua, Taliqua and Mohammed and all of that crap, and all of them are in jail…Brown or black versus the Board of Education is no longer the white person’s problem…We have got to take the neighborhood back…We as black folks have to do a better job. We cannot blame the white people any longer.

-Bill Cosby Address at the NAACP’ on the 50th Anniversary of Brown v. Board of Education, 2004

Cosby’s address sparked controversy over 10 years ago, and today it only further complicates the matter of  being able to separate Cosby from Huxtable. Cosby’s admission of using drugs to sexually assault women doesn’t seem to be making matters any more clear, as many fans and Ebony readers publicly declared their continued support via the comment section:

“How rude of you to make him the target when he’s clearly goin through enough. This made me want to burn every ebony magazine my family has ever purchased from you. Did you see Cosmo posting the Subway guy?? You guys have crossed every line. Ashamed of you.”

“How rude of you to assume to know for a fact that he did this. You, nor the women can show any evidence. My grandchild will have the entire DVD set of this show because it has value!”

“This magazine cover was done in very poor taste. Not only is it defacing Bill Cosby, but the shattered glass is also reflecting off of his cast members who had ABSOLUTELY NOTHING TO DO WITH his allegations. Terrible. Do better Ebony Magazine.”

The reality is that Heathcliff Huxtable was an amazing character, a work of art, even. But he isn’t real.  As much as I wanted him to be my Dad, he isn’t my Dad. Dr. Huxtable is, undeniably a part of our collective memory and experience. We can love the character Cosby played with all the fierce loyalty owed to such a groundbreaking portrayal, but we must decide that we cannot continue to trust and celebrate a man who committed terrible crimes. We cannot continue to love someone who violated women and treated them with such contempt.

What are your thoughts on the new Ebony cover?

“heartbreaking but honest” is the a very apt description. No tea no shade but I never got into the Cosby show. It was all too manufactured and calculated for my taste. But I do understand its impact and understand why it meant a lot to the black community. However, just like how we must confront the demons in the ones we love, people must also confront the reality of Bill’s actions. It’s the only way forward; desperately clinging to one’s heroes despite overwhelming evidence of a crime is a toxic and ultimately damaging route to take.

What this TV family represents and it’s legacy will never change for me. This show represented and still represents so much hope and positivity especially within the Black community. What Bill Cosby did outside of that is something else entirely. I don’t understand why anyone would want to tarnish the reputation of this show based on Bill Cosby’s actions. The show was his job, his source of income. He played a character. It has nothing to do with who he is as a person. I do not agree with Ebony. Focus on Bill Cosby himself, don’t bring down the legacy… Read more »

Loved the Show. So sad for the other actors who are suffering the consequences of Bill Cosby’s actions. As painful as this whole saga is, the Ebony cover was appropriate.

Still loved the Cosby show no matter what. Of course I’m against what he did but I love the show regardless. And I still watch the reruns online.

I still love the show!! I’m also not ready to throw Bill Cosby to the dogs because of those allegations not because he was one of my role models(because he wasn’t) but because of what his celebrity status meant to a lot of these women whether they wanted money or help with their careers or the spotlight or even the chance to say they fucked a celebrity. Buying party drugs should not shock people as much as it did and had peeps putting nails in the coffin. It feels like MJ all over again.

I never felt like he was playing himself in that sitcom or the one that came after but I liked both. I feel like people could be putting the cart before the horse on this one. If my neighbor was raping women I would be disgusted but I wouldn’t burn every momento I had of them because they may have done some good in all those decades. I have a problem with all the good this man did bein erased.

This a very controversial topic and up to me it confronts us to 3 facts: – the complexity and poly-faceted of human being as you can be a very friendly colleague and a terrible mother at the same time, an accomplished scientist acclaimed by his peers and be an horrible son/daughter, be the best spouse on earth and the worse sister ever…we, as human beings are multifaceted and lie in duality and complexity. So when something happened, you will always hear ‘he was so kind as a neighbour, I don’t think he did it etc.” without thinking that yes on… Read more »

We need to stop defending the pariahs in our community. People can be upset about the cover Ebony chose to use, but it was a well chosen. Bill Cosby and The Cosby Show represented us in a positive light and we held on to that ideal for years, but because of recent events that representation got shattered and by none other than the man himself. And he shattered the lives of cast members as well as the show will no longer be in syndication. Bill Cosby did a horrible thing. He did. Let’s face it. Stop trying to defend him.… Read more »

Painfully true! I remember there being maybe less than a dozen successful black sitcoms that EVER graced the silver screen…from That’s My Momma to Empire! I lot of GREAT actors have not so great lives. They play a character for money, BUT it is NOT them persay for real. I hope he can MAKE the remaining of his life a better one.

Knowing what he did has, in a way, tainted the show in my opinion. I think the Ebony cover represents that. I can’t watch the show now and not think of the terrible things he did.

Still a fan of the Cosby show and I am sure their are others done and doing worse today but haven’t gotten exposed.

I’m a bit confused about the purpose of the Ebony cover and how it fits in with the title of the article. Now, don’t get me wrong; I wholeheartedly agree with the words in this article, namely that we have to separate the artist from their art. Absolute sociopaths can create the most stunning art, as we’ve seen time and time again. My issue with the magazine cover is this: if the purpose is to separate Bill Cosby from Heathcliff Huxtable, why show a broken picture of Heathcliff Huxtable and his family in response to ‘Bill Cosby’s’ crimes? Doesn’t that… Read more »

My comment has nothing to do with color…just a man. Loved the show. But society should never give a ‘celebrity’ a pass just because in public they pretend to be a Role model. If this was your neighbor that you were friendly with for decades and then found out he was raping girls and women you would be horrified! And furthermore, I doubt any of you would allow your children around him. Separating the character from reality is not that simple in this case. The entire show was centered around him and his values. He is basically playing himself in… Read more »