Mattel, Why Isn’t the Zendaya Doll Available for Purchase?

Over the weekend, my Twitter timeline and Facebook newsfeed were both flooded with praise for Mattel for their production of Zendaya Coleman’s gorgeous 2015 Oscars look, faux locs and all. The doll presents Mattel with an opportunity to join the movement past traditional beauty standards in society and represent girls of color in a more diversified manner. Mattel has made black Barbie dolls for as long as I can remember, but the features on this one are especially unique and represent a celebrity that many little girls already look up to and see on a regular basis, which is not often seen (Mattel released a Brandy doll with microbraids in 1999 and there have been other celebrity black dolls, but it’s not common). 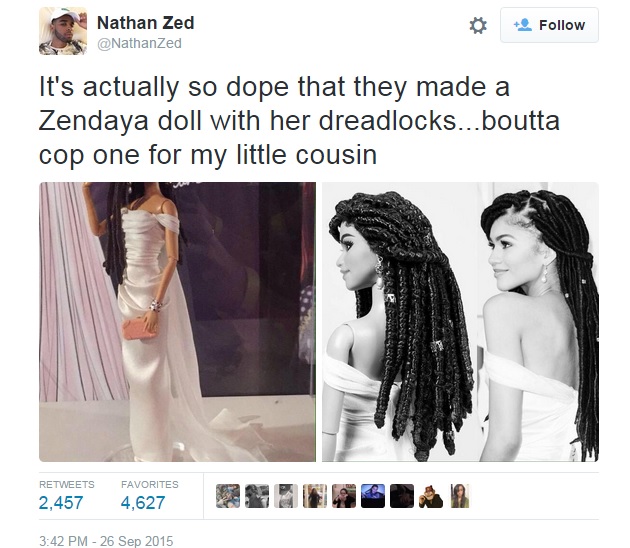 Even a typical hatin’ response from Demi Lovato about representing “curvier” women as well could not dull the shine and excitement that the online world expressed once the breathtaking photos of the Zendaya doll were released. But *scratch record* Mattel does not plan on making the doll available to the masses. 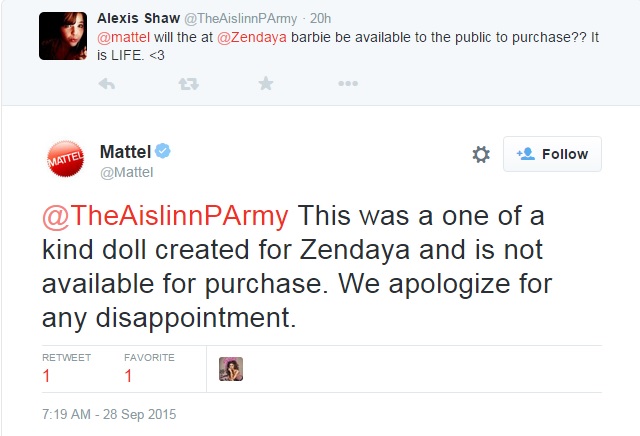 While it’s amazing for Zendaya that Mattel created this doll especially for her (I mean, hello icon status), why wouldn’t they plan to mass produce the doll given the overwhelming response and even more the need for such a doll to be made? Mattel is no stranger to creating dolls that are more intricate than the typical Barbie model, including dolls from The Hunger Games and Divergent Series, as well as Mad Men. Similar to the Zendaya doll, they even created a doll modeled after Fan Bingbing and her red carpet look from the Cannes Film Festival. 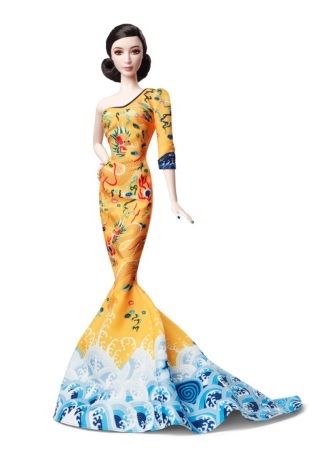 There are several questions that come to mind when I think of why Mattel isn’t going to make the Zendaya doll. Is it too difficult or expensive to recreate the locs? Are there clearances required with Disney or someone else that Mattel cannot obtain? Would it be too difficult to mass produce the intricate facial detailing on the doll, baby hairs included? Shoot, could we even get a version of the doll that isn’t as intricate for the masses?

Also, I can’t help but scrutinize the media’s coverage surrounding the release of the doll. Although Mattel’s original press release blatantly stated that the doll is “one-of-a-kind,” several of the articles I read used misleading headlines, such as Time’s “Barbie is Making a Zendaya Doll,” which lead many to believe that they too will soon be able to own their own mini-Zendaya. I know that I was ready to add an alert to my phone with the release date so I could be at Target when it opened. Dream deferred.

All that being said, Mattel, what can we do to make this doll happen?

What are your thoughts on the Zendaya doll not being sold to the masses?

What?! You didn’t think they were actually going to sell an ethnic-ish doll with locs did? ‑_- Stop expecting these all-white companies to represent us and buy your daughters dolls from black owned businesses, problem solved. https://www.facebook.com/Browneyeddolls?fref=ts

Its hard for any smaller business no matter who runs it now, because of stocking deals with Toys R Us and Target and Walmart. If you aren’t big enough you can’t get your product on the shelves, so even if you make a doll, you are limited where you can sell it. And with that lack of money, it is hard to make a product up to the same quality and design standards as Mattel and MGA. I wish there were still small privately owned toy stores around like there used to be when I was a kid. All these… Read more »

I was willing to buy the Zendaya doll, I was pretty disappointed when I found out they weren’t selling the doll 🙁

Mattel is certainly entitled to make the Zendaya doll just for Zendaya, but even if it would offer the Zendaya doll in a limited run, THAT would be better than none at all for everyone else.

Perhaps this would be a good reason for African Americans to get together and start our own doll company so we don’t need to crawl to Mattel with our hats in our hands. Is it possible that large doll makers don’t want our little girls to play with natural hair dolls for a reason? Nah…

WOW.….I WAS SO READY TOO GET THE DOLL FOR MY TWO NIECES.…I WAS ALSO GETTING ONE FOR MY DAUGHTER(SHE IS 18, AND ALSO A FRESHMAN IN COLLEGE.. I WANTED HER DOLL TOO BE A COLLECTORS ITEM…) I TRULY HOPE MATTEL REVERSE THEIR DECISION AND BRING THIS BEAUTIFUL BLACK DOLL TO THE PUBLIC.…
.….….….……#MATTELSTEPUP. .….….…#OURBLACKISBEAUTIFUL

If they sell the Zendaya dress they have to pay her a cut of each doll for using her likeness, so that was never going to happen.

Ohhhh, there you go.…

Mattel really pisses me off sometimes… and this is one of those times. This decision is pretty asinine if you ask me. Stupid, plus blatantly torturing people. If they are not going to release the doll for sale, they should have never let people know about it. Its a totally cute doll, plus a pretty realistic replica of Zendaya (although the doll’s nose is a little too pointy… I always have my gripes about celebrity dolls) At any rate, this is a gorgeous doll and its really lame that its not available. I just saw a photo of it in… Read more »