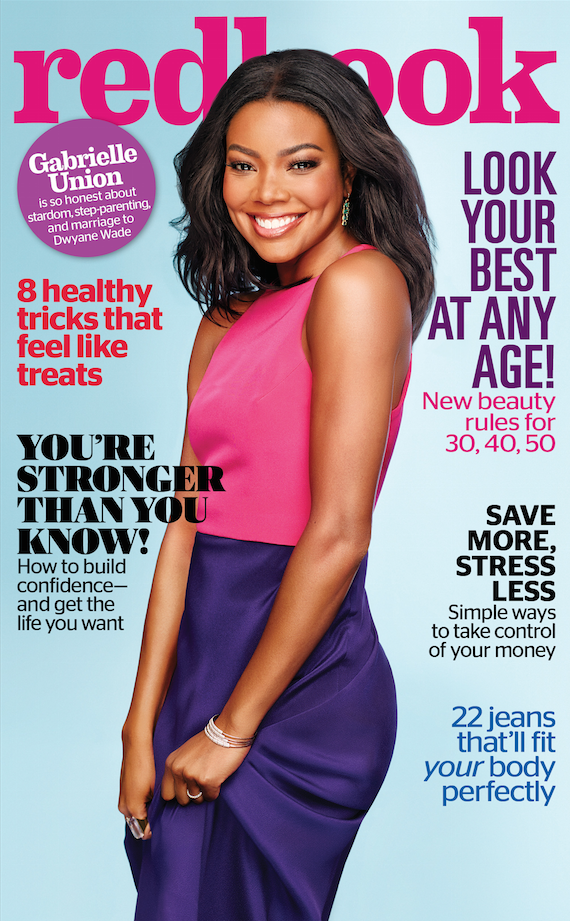 Gabrielle Union on the cover of Redbook’s October 2015 issue.

Actress Gabrielle Union is the covergirl for Redbook’s October issue and she discusses the stigma attached to her decision not to have children right away. The 42 year old stepmother of three says that because she is choosing to continue her career over starting a family, she’s being looked at differently.

“So far, it has not happened for us. A lot of my friends deal with this. There’s a certain amount of shame that is placed on women who have perhaps chosen a career over starting a family younger. The penance for being a career woman is barrenness. You feel like you’re wearing a scarlet letter.”

Union, who is married to NBA star Dwayne Wade, 33, also said that there is a possibility for children in the couple’s future, but she believes there is another hurdle to jump once you decide to become a mother and continue to work.

“The reality is that women are discriminated against in the workplace for being mothers. As much as there are strides being made – you get pregnant, your career takes a hit. You can’t have a bad day. Don’t you dare cry at work. Don’t raise your voice. Especially if you’re a black woman in corporate America—now you’re ‘the angry black woman.’ ”

Not sure if Union realizes this, but women have been able to maintain successful careers and have families for decades now. Are the challenges that come with the juggling act unique and different? Sure. And yes, women who decide to have children and continue their careers are sometimes discriminated against. But saying that barrenness is the ‘penance for being a career woman’ is a bit much. It’s challenging, but very possible to have a career and a family in your 20s, 30s and 40s.

Women are waiting longer and longer to start families, and being praised for their decision to do so. Gone are the days when women wanted nothing more than to be wives and mothers. Careful family planning and career management are becoming more important. Also, for the record, it would never be appropriate to raise your voice or cry at work whether you are a man or woman, or have children or not.

What are your thoughts? Are Gabrielle Union’s beliefs outdated or on point?

She said “it hasn’t happened for us” which leads me to believe they’ve been trying without success. Even though she looks young realistically it wouldn’t make sense for her to put it off on purpose now that she’s married to someone she would like to have children with. I didn’t read the whole article so I’m not sure, but from the excerpts I think she is saying that it *seems* like the penance for starting older because she didn’t settle down earlier is not being able to have the children now that she’s ready, and that it feels like people… Read more »

I agree with Gabrielle Union. Sheryl Sandberg’s book, Lean In, and other statistics about women in the workforce show that women 1) are working longer into their pregnancies, 2) bear the brunt of the work in relationships especially after they have children, and 3) are often discriminated on before and after they have children. I think this is particularly true for male-dominated fields (which are most of them in the U.S.)

I think what she means is there are many women who choose a career over starting a family young because they assume that their eggs will always be there or that they’re even healthy at all. What many women are seeing is that when they’re ready to start a family the doctor is informing them that they’re eggs are not capable of “healthy” enough to bear a child. How many of us in our 20s actually get evaluated prior to having children to see if we’re able to have kids? Unless it runs in the family, most think have sex… Read more »

Spot on! This is something that more young women need to be aware of.

She’s just being honest. We are not men. We have biological clocks n there is a prime time to have children and once your out of that time things get harder. Lots of women are learning that the painful and expensive way. It’s sad but is the truth. If you purposefully put off having children in your prime you might be surprised. .though you shouldn’t be. .To learn that starting a biological family in your 40s is not so easy. Even younger women face fertility issue but age makes it that much more likely.

The Darling Kinkshamer
Reply to  Keeta

Actually, aged sperm(male dna) can be just as troublesome. Freezing eggs is possible, as is having a surrogate or adopting–there are ways to do it. Don’t give up your earning potential just to push out a genetic copy, you are worth more than that.

The majority of us professional black women in the work force come from very dysfunctional families. Even if we went to college, we have to develop our careers and may also have to supplement our family (parents and siblings) income and often have to deal with a bunch of issues our Caucasian and other race peers don’t have to deal with. We have to deal with black men most of whom came from single family households, are womanizers and may not want to get married so early in life. We’re sold on the American dream of a college degree, corporate… Read more »

I have to respectfully disagree with Portia, the author of this post. Gabrielle Union never said women aren’t able to maintain successful careers and juggle having a family. Union just discusses how challenging it is for women who have solely been focused on their careers throughout their 20s and 30s to get pregnant in their 40s and maintain their successful career. That is REAL. Kita Williams’ earlier response is spot on! In your 20s you don’t think about fertility issues. But the reality is generally the older you get, the harder it is to get pregnant. For the last few… Read more »

I find her choice of words interesting. “Penance” implies sin, and I wonder whether she’s a religious person and if she really believes that she’s sinned by focusing on her career rather than getting married and pregnant younger. I hope that’s not the case because that’s a terrible burden to carry on oneself especially nowadays when women have more choices than ever before. As for “barrenness”…technically, ALL women become barren eventually through menopause, though some experience it at younger ages due to other biological factors. As others have said/implied, there’s a reason why it’s called a “biological CLOCK.” I don’t… Read more »

So silly for her to suggest that you can’t be a mother while being career oriented. Has she ever heard of the likes of Jada Pinkett-Smith, Heidi Klum, Halle Berry, Angelina Jolie-Pitt? And the list goes on…it’s almost like who in Hollywood (Besides Jennifer Anniston) DOESN’T have a kid??…perhaps Gabby didn’t get that memo, lol.

High-earning career women can afford to freeze their eggs. That’s what Melody Hobson did.