‘I Was Introduced to Future’s Other Children’: Ciara Calls Out Her Dating Double Standard

If you frequent social media and blogs, then you’re probably aware that singer Ciara is currently dating Superbowl-winning Seattle Seahawks quarterback Russell Wilson. They’ve been an item since April 2015 and are often seen out and about together with Ciara’s son, Baby Future, occasionally tagging along. Baby Future’s father and rapper, Future, doesn’t like the idea of Wilson being introduced to his son so early in the relationship and this has sparked an ongoing debate about the right time to introduce your child to a new beau. Photos of Wilson, Ciara, and Baby Future taken at Wilson’s training camp were particularly egregious to men in particular, who took to calling Ciara some unflattering names. 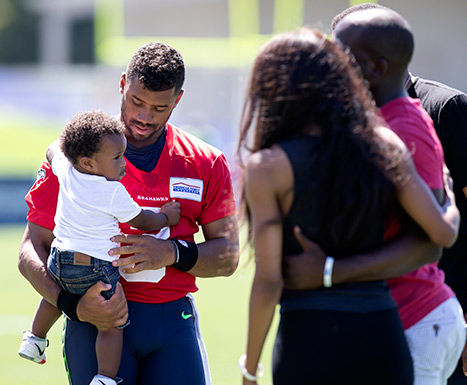 The photos even prompted a series of subliminal tweets from Future himself who then went on the popular morning radio show, The Breakfast Club, to publicly state his disapproval of Ciara introducing baby Future to Wilson too soon:

“Of course I wouldn’t want nobody pushing my son [in a stroller] that’s the number one rule. If I was a kid and my mama had a dude pushing me, I woulda jumped out the stroller and slapped the shit out of him. You never do that in our community. You don’t bring a man around your son. You ain’t even know this dude for a few months and you bringing him around ya kid. Who does that?” 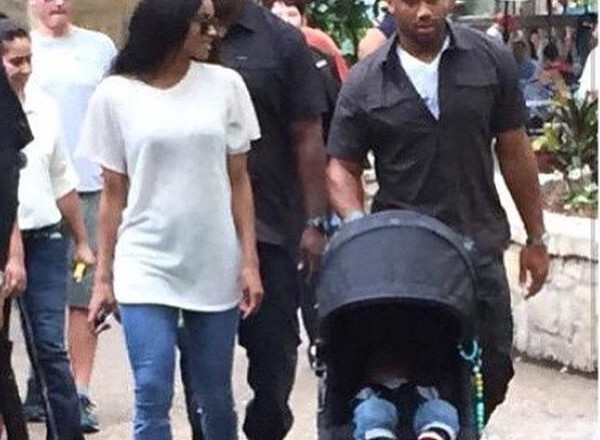 Meanwhile, in an interview on CBS’ The Morning Show, Ciara stated that she was introduced to Future’s other children in the beginning of their relationship and even took care of them. She also mentioned that she did indeed try to reach out to Future regarding Wilson, but he declined to speak with her.

We’ve seen this time and time again. Women leave one relationship and people expect them to wait years before they even think about moving on, let alone introduce a man to their child(ren). This seems to be a common idea amongst the black community, as Future stated in his interview. A black woman who expresses freedom in her romantic life is automatically branded a ‘hoe’ or ‘too fast’. It is as though there is a discomfort with black women expressing responsible choice and agency in the areas of sex, romance and love. Ciara offered this closing remark on the subject:

“I don’t know what more they would expect for me to do than just live my life, and that’s what I’m doing. My son is the most important and the person that loves me.”

Honestly, if this were the other way around, Future wouldn’t receive a quarter of the backlash that Ciara’s receiving. In fact, he’s been spotted with a few women since his split from Ciara and who’s to say that little Future hasn’t seen a woman or two in passing? It’s not like Wilson is some man that is passing through. Ciara is clearly in a committed relationship with him and he appears to be an upstanding man, so it’s not clear why it’s such an issue that her son has been in Wilson’s company.

Those same dudes who ranted about Ciara most likely have taken their child/ren to meet some woman that they just got into a relationship with. I know from experience as my father used to take me and my brother over to some woman’s house that he’d just met. Why is it acceptable for Black Men to get away with things like this and the community don’t speak out but let Black women do the same thing and the Black community (especially the Black Men) are ready to stone said woman?!

I think men and women should wait a while before introducing their children to the new people in their girlfriend/boyfriend. There are too many horror stories out there.

There should be no double standards. This is a discussion adults should have before having children and or right after having a child. If this was how he felt all along then they should have discussed it prior to having kids or during the pregnancy. But for the sake of the child’s well being, I think both parents should wait a while before introducing new partners into their lives because you never the the outcome and or how long the relationship will last as well as how it may affect the child. Sometimes it works out and sometimes it does’t.… Read more »

I think procreating with a man who lives and brags about his drug filled misogonistic lifestyle was her first mishap.

Yes.There is a double standard

No. I don’t feel sorry for her.

Lay with dogs you get up with fleas.

My ex husband left and I soon realized it was the best since I had been unhappy for a long time as a result of his cheating. This fool thought I was going to wait for him to come back when he was ready. LMAO! No thanks, I met someone before we were even divorced and was remarried by the end of the Year, right after my divorce was final!!! LOL! I have been with my current husband for 15 years now and he, not the ex raised my four children from my previous marriage, along with the one we… Read more »

Woman of Substance! I applaud you. Now take a bow for your standing ovation. You deserve the best, my Sista?????????

You’re right ! I wish more women speak like you.

I think it ridiculous that her decision has to be justified. The fact that people fight double standards, but the turn around and perpetuate them is beyond me.

He just seems mad that she moved on from him so easily… just butt hurt… she was supposed to wait forever? Be single and alone forever just to make Future feel better… while he is free to roam…and bring all these random women around their son? #pfft #byeboy

For some men the moment a woman becomes a mother she isn’t allowed to have a life outside her motherhood or she’ll be deemed a hoe.…

Future can keep it moving. Ciara scored herself a fine one and Future is all in his feelings about it. Russell stands heads over Future as far as reputation goes. I wish the couple the best.

If he was so concerned about who was pushing the child’s stroller, he should have married her. The man she is dating is a working professional. I wish her the best.

I’ve ranted about this subject since the beginning. It’s absolutely mind boggling at the amount of backlash she received for simply moving on with her life. Ebro, Charlamange, TI and Mike Will were all too happy to call this woman out her name because her baby father who cheated on her, missed the birth of his son, OPENLY admitted to doing drugs, stated that he hasn’t seen his son since April, bragged that he controls all his babymothers by buying them houses was in his feelings. White celebrities(Heidi Klum, Britney Spears, Jennifer Lopez, etc) all had relationships with men who… Read more »

If you don’t want someone else taking care of your kid then stay with the mother. Stop jump from woman to woman like a bee does flowers. People need to grow up!

We as women, especially modern black women need to stop falling for the myth of “we both have swagg so we go together”. All i am saying is NOT that you should reject all the guys with swagg who come your way but swagg should NOT be the primary thing we should look for in a man, only a PLUS. Ciara clearly fell for that myth when she got with that rapper.