Admittedly, the first thing many people think of when they hear the term “Gullah,” is a memory from the popular 90s Nickelodeon children’s show, Gullah Gullah Island. Although, this was a show made for kids it was based on the real life experience of the star and creator, Ron Daise’s hometown in St. Helena Island, South Carolina.

The coastal islands along the Southeastern part of the United States is home to one of most distinct societies in North America- The Gullah Geechee. The Gullah Geechee are descendants of West Africans who were brought across the Atlantic as slaves to work on plantations. 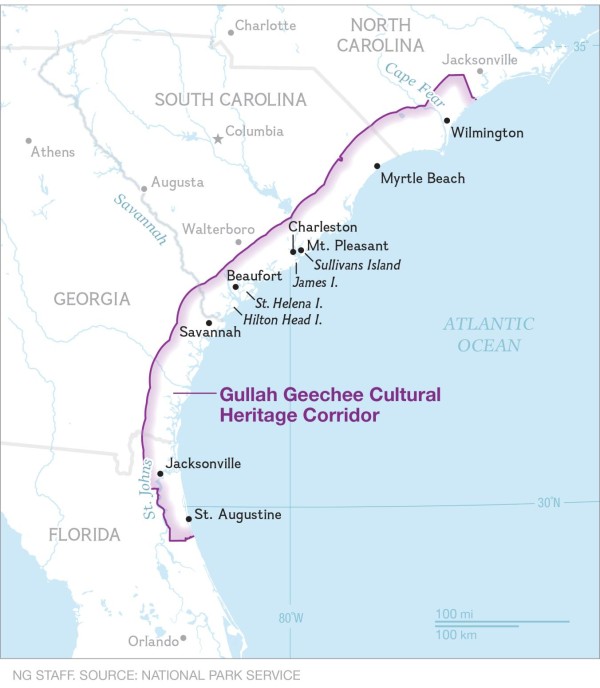 The Gullah Geechee people have their own unique creole language known as ‘Geechee’ or ‘Sea Isand Creole English.’ The dialect is similar to that of which is spoken in the Bahamas. It is said that around 250,000 people in South Carolina still speak the Gullah language today. Fun fact: Supreme Court Justice, Clarence Thomas was raised a Gullah speaker and is often known to not have much to say during court proceedings as he was ridiculed for his speech.

Shortly after the historic Emancipation Proclamation was issued in 1863, the now-free Gullah Geechee of the Southeastern Islands took over the lands of their former masters, who had abandoned their plantations en masse.

In 2004, The National Trust for Historic Preservation listed the Gullah Geechee Coast as one of 11 most endangered historic places:

Until fairly recently, the coastal region of islands, marshes, placid rivers and oak-shaded roads had seen relatively little change — but now change is widespread, often overwhelming and sometimes devastating. Unless something is done to halt the destruction, Gullah/Geechee culture will be relegated to museums and history books, and our nation’s unique cultural mosaic will lose one of its richest and most colorful pieces.

Now, the Gullah are being driven out of their homes. With the values of coastal property steadily increasing, so does the property tax. The addition of greedy developers planning expensive condos, golf courses and hotel resorts in the area also plays a part in the area’s disintegration. Because much of the land is owned communally between family members are often subjected to Heirs Property Law. This law was created specifically in response to African American land ownership post-Civil War. According to heirsproperty.org this law was a way to govern property not properly probated in a court of law:

Heirs’ Property owners were routinely denied access to the legal system; could not afford to pay for legal services, and didn’t understand or trust the legal system.  As a result, much of this land was passed down through the generations without the benefit of a written Will, or the Will was not probated within the 10 years required by law to make it valid – so the land became heirs’ property.

Heirs’ property is land owned “in common” (known as tenants in common) by all of the heirs, regardless of whether they live on the land; pay the taxes or have never set foot on the land. In the case of heirs’ property, any owner can sell their portion of the land to a buyer who could easily force the sale of the entire property in court. Developers used this tactic on many Gullah, by pitting family members against each other with the promise of a short-term profit.

It has been said that the Gullah Geechee were able to maintain African ancestral traditions more than any other black Americans in the United States. In an interview with CNN, Carlie Towne, minister of information of the Gullah Geechee nation had this to say:

“We have the highest retention of African tradition in America,” says Towne. “African-Americans have assimilated more so they don’t have those African traditions that we have — they don’t treasure them, they don’t honor their tradition like we do. And we’ve been able to hold onto that because of isolation, because of the strong will and our self-determination. We still eat the same foods [as] our ancestors [when they] came from Africa.”

From basketmaking to the trade of shrimping the Gullah Geechee hold steadfast to what they’ve known for centuries:

They gather sweet grass to practice the ancient African art of basket making; they pay homage to their West African traditions by keeping alive the ring shout music folk tradition; they make a living by fishing shrimps and harvesting oysters, using handmade nets and casting them the way their ancestors did centuries ago. 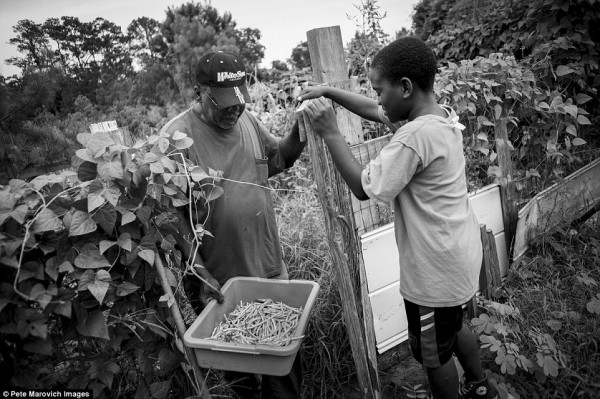 Farm to table: Frank Bailey with a tray full of freshly picked beans from his garden in the Hog Hammock community on Sapelo Island

People of faith: Queen Quet Marquetta L. Goodwine, Chieftess of the Gullah Geechee Nation stands outside of one of the three remaining praise houses on St. Helena Island, South Carolina. Built during slavery, they were small places of worship for the Gullah and still serve an important spiritual role in the community 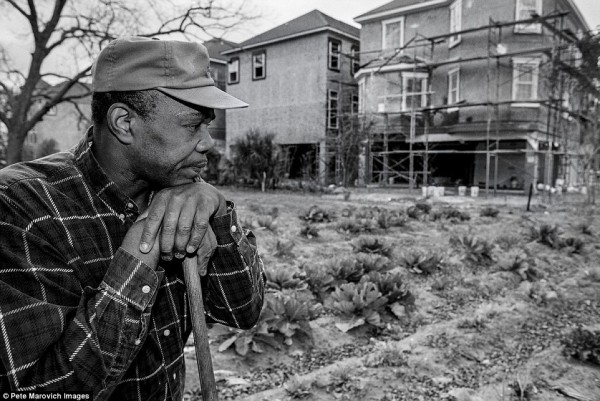 Squeezed out: Eddie Grant Jr. tends his mother’s garden as new condominiums rise along her property line. While Grant’s family has managed to hold onto their land, many other Gullah Geechee residents have been forced to sell their property due to rampant development and escalating taxes 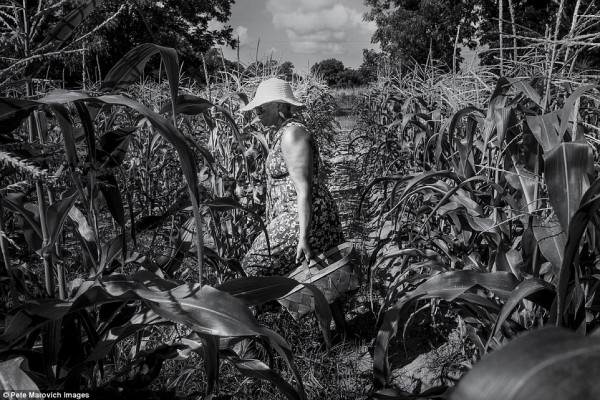 Seeing green: Sara Reynolds Green picks vegetables in the Marshview Community Organic Farm on St. Helena Island. Green’s mother was able to put three daughters through college back when the packing houses on the island were paying the local Gullah farmers for their produce. Today there are large corporate farming operations on the island that they would prefer to deal with 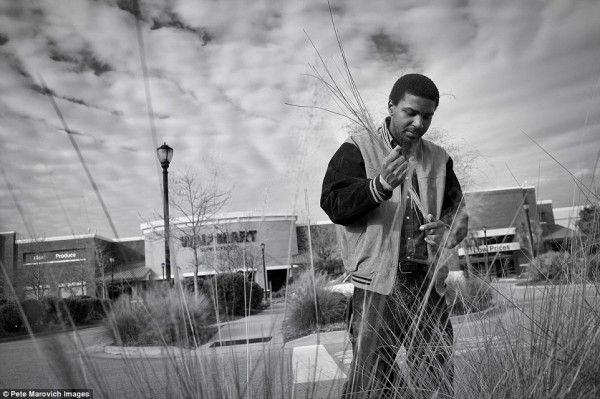 Guarding traditions: Mt. Pleasant resident Antwon Ford pulls sweetgrass from the landscaping in front of the Wal Mart near his home. Ford has been sewing the traditional Gullah sweetgrass baskets since he was 6. The local Gullah residents have an agreement with the shopping center management to pull the grass that is necessary for making the baskets 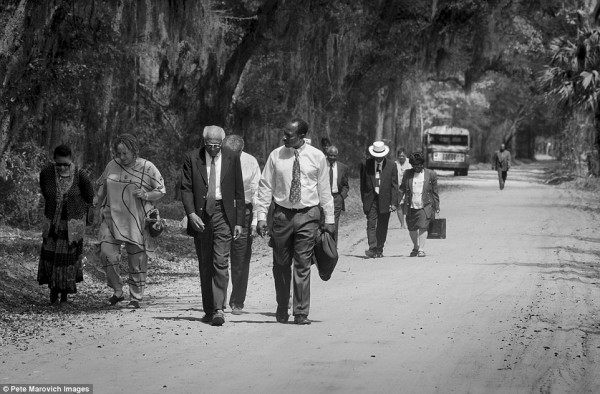 In their Sunday best: Members of the First Union African Baptist walk from services to the community center in the former Mary Fields school. The church, now a historical landmark, began in 1879 when John Stoddard divided his Mary Field plantation into lots and sold 12 acres to former slaves for the purpose of building a church and cemetery. The original church building burned in 1884 and was rebuilt in 1885 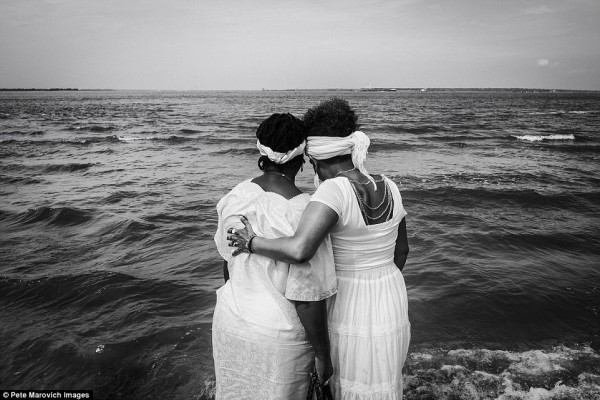 Honoring the dead: Every year a ceremony is held in several places along the eastern coast of the US like Sullivan’s Island near Charleston commemorating the nearly 2 million Africans who perished in the Middle Passage of the transatlantic human trade 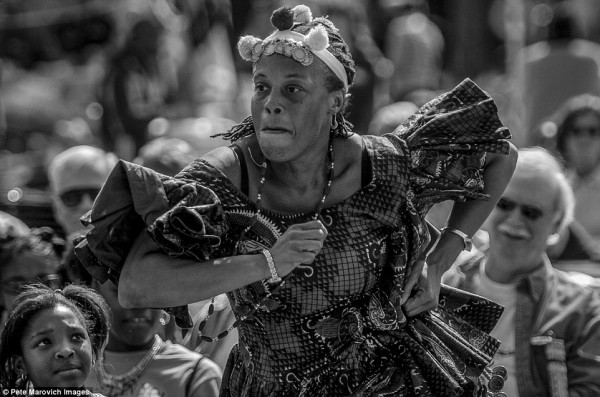 Feel the beat: Spectators on Hilton Head Island look on as a Gullah woman performs a traditional dance during one of the many Gullah Geechee celebrations that are held annually in the Sea Islands

Did you know about the Gullah Geechee culture? Do you have family residing in the region?

My mother and all her family are from Mt.Pleasant SC..I grew up listening to my all family members there speaking the Gullah dialect..nowadays it speaks that they only speak that way when it’s around family or close friends..not so much in the workplace or if they have moved from the area.

Thank you for this article, I knew about their lifestyle but I didn’t know that it was in danger. What I would like to know is what we can do to help them in retaining their lands and traditions. Are their crafts and fresh produce available to purchase?

Unfortunately, I didn’t know much about the Gullah Geechee culture prior to reading this.

Yes, I do know about the Gullah Geechee. I actually visited St. John’s Island and Kiawah Island a few years ago on a business trip and, while there, met a few Gullah people. I also went to school with someone who was Gullah. From my limited experiences, Gullah seem to have an affinity to West Indians; their dialect is similar to some in the Caribbean. They also had a PBS special about the Gullah a few years ago, when Sierra Leone officially recognized the Gullah as having descended from there. For those who are interested, I’m sure you can find… Read more »

I never heard of them. It’s blogs raises like this that raises awareness on stuff some of us are not too familiar with. I will share on Google.

What shocks me the most about reading this article is most states still deny that slavery existed and to try and connect to the cultures which have been isolated from contact within the system to legalize their regions is devastating. I’m pretty sure all civil rights violations,storms,environmental disasters,threats,bribes,violence from former slave owners children’s as keepers of cultures who they refuse to free from states asmwere expendables wasted goods, so to read this article and see the system still refuses to connect the lost cultures right within the states is devastating. I myself find same troubles like in hiring practices number… Read more »