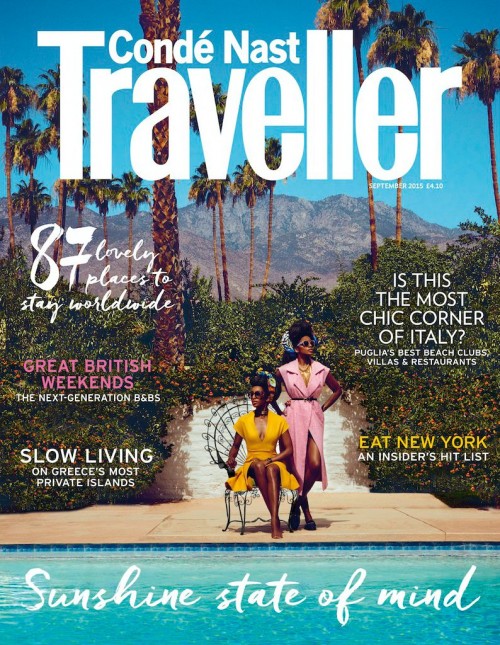 Get it ladies! Fierce twin duo/models/artists/UrbanBushBabes.com blogging powerhouses Cipriana and TK Quann have been making moves as of late and getting well-deserved recognition. The twin sisters landed the September cover of Condé Nast Traveller magazine. The spread was shot in Palm Springs, Ca and will make you want to pack your weekend bag and jet set off into the pacific sunset. 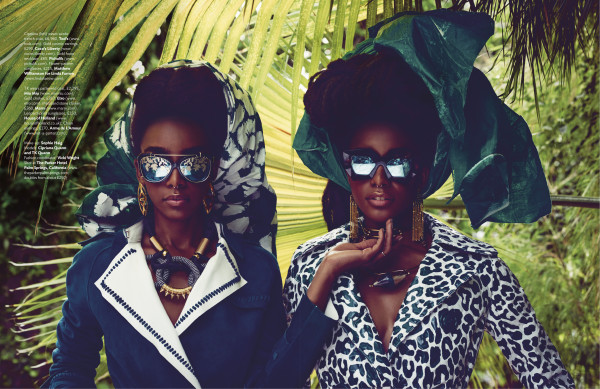 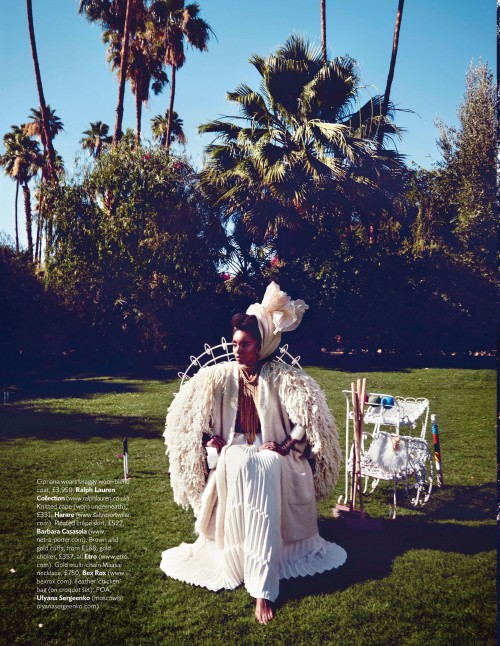 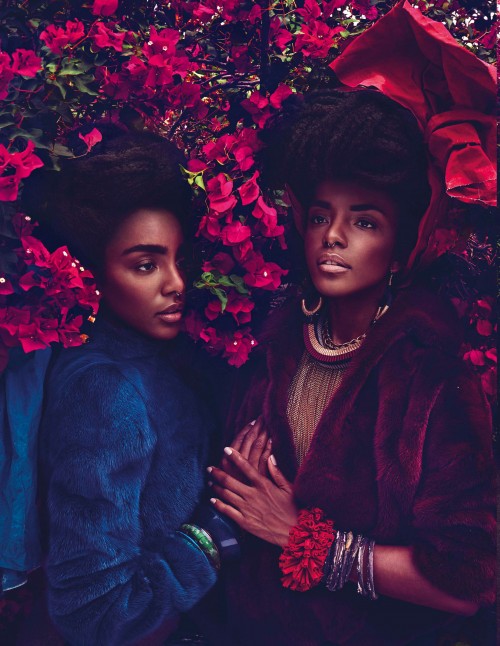 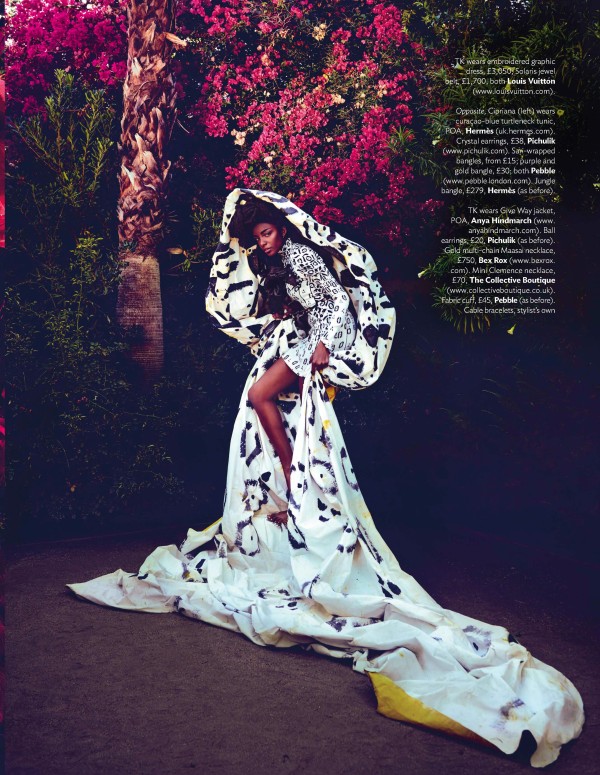 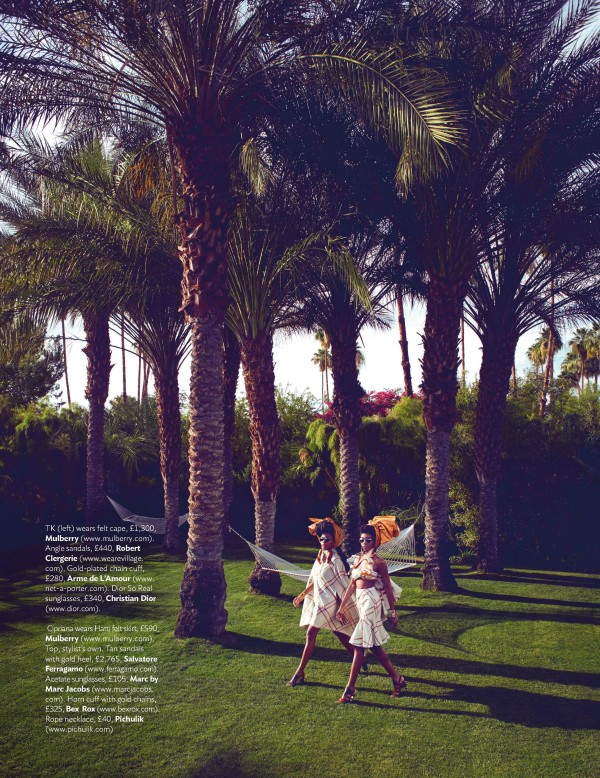 We might be most familiar with Cipriana as a natural hair icon who dished incredible hair advice (including here on BGLH as a contributing writer!) but she has evolved and is now a full-time model represented by IMG Models Worldwide, one of the top international agencies that has represented Tyra Banks, Heidi Klum and Gisele Bündchen!

On her blog, she reflected on what it means to her to be a natural woman in this position;

Before co-founding Urban Bush Babes, during my late teens I was scouted off the streets of New York during a family summer vacation. This jump started a decade long modeling career through my college years and as beautiful as the journey was there were major elements of the industry I did not agree with. I am of course not in anyway saying that all aspects of the job I abhorred. I enjoyed meeting amazing new individuals (I had a wonderful agent then), travel and hey, being financially stable is always a plus, but on the flip side I was constantly addressed on the state of my natural hair by clients, deemed as not “commercial” enough, not considered an “ideal” form of beauty or “I could go so far if I just changed the texture of my hair”. Fast forward to the present and now times are changing but it was a very different story years ago.

This is not in any way a boo hoo moment. I truly felt blessed to be able to make a living in the industry but as a model years ago without the surge of social media and the consumer’s need in knowing more on the individual behind the face of the brand she/he is representing many times you were a blank slate, formed and molded into what the client saw as “beautiful”. Like anything there were the exceptions, but for the majority of models this was just the norm. Now I was not naive to that factor but the problem that arose for me was I tended to take those sentiments home, not leaving the work at the office as they say, that “standard ideal of beauty” carried over in my personal space, where it consumed what I thought was the most beautiful standard of beauty in my eyes…my Mother. I know some may say “well it is only hair” but hair was a big connection to my childhood specifically regarding my Mother and how I defined beauty outside of the “ideal”. To see her with this bigger than life glorious Afro, I just thought I was the luckiest girl to be surround by such exquisitely unique beauty inside and out. Then fast forward years later to be a young woman surrounded by naysayers constantly addressing the state of my natural hair as not beautiful, eventually led me to correlate to my Mother’s image, questioning my view on what was beautiful, which I was not comfortable with in the least. This idea that I constantly had to mold myself to fit someone’s else ideal wore me thin, mind body and soul, and decided enough was enough and left the modeling world which was one of the main inspirations behind Urban Bush Babes. Creating a platform, celebrating and supporting women to feel comfortable coloring outside those lines, knocking down those stereotypes of what the “standard ideal beauty” means and showing through example that real beauty has no ideal and goes beyond aesthetics.

My twin sister one of my biggest inspirations entered the realm of modeling simultaneously when my career began but left shortly after, feeling creatively stifled TK submerged herself in her ultimate passion; music.

I have told this story briefly before but I wanted to elaborate a bit more on why this merge with IMG Models Worldwide is such a milestone for us. What a wonderful feeling to come back into the industry with a voice as well as with the number one agency in the world all for being ourselves. So excited to be apart of the IMG family.

Congratulations beautiful women, and we will be cheering you on on this journey!

What do you think of this fierce spread?

Wow, so posh!! I’m so glad to see Cip take a greater presence in the modeling world and this time take sis with her. They look beautiful! Did they put them in blackface, though??

“Did they put them in blackface, though??”

This is so SO SOOO amazing! Fabulous! This ladies are so high fashion.

They’re all beautiful but I love the “natural” shots more than the high fashion ones especially for a travel magazine.

Sooo fly!…I would love to see TK Wonder’s hair down brushed out, free..it would be amazing.

I’m going to Target right now to see if I can pick this Conde Nast Traveller up. Great job ladies.