On July 2, German-born, Jamaican-bred tennis star Dustin Brown beat world number 10 Rafael Nadal in the second round of Wimbledon. The victory was shocking because Brown is currently ranked 102nd in the world. Unfortunately he was knocked out in the third round, but he still has folks talking for quite a few reasons;

I mean… it goes without saying. The hair is glorious! Here’s a video of him talking about his locs (that accent… so dreamy! Yes…. I said dreamy.) He hasn’t cut his locs since 1996! 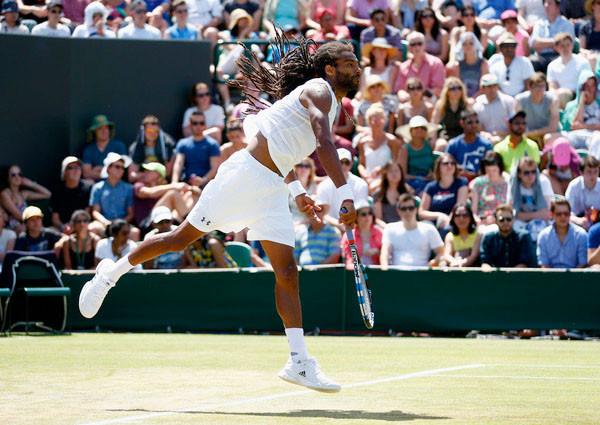 At 6′ 5″ Brown is one of the tallest professional tennis players in the world.

3. He is one of the only tennis players who has beat Rafael Nadal more than once. 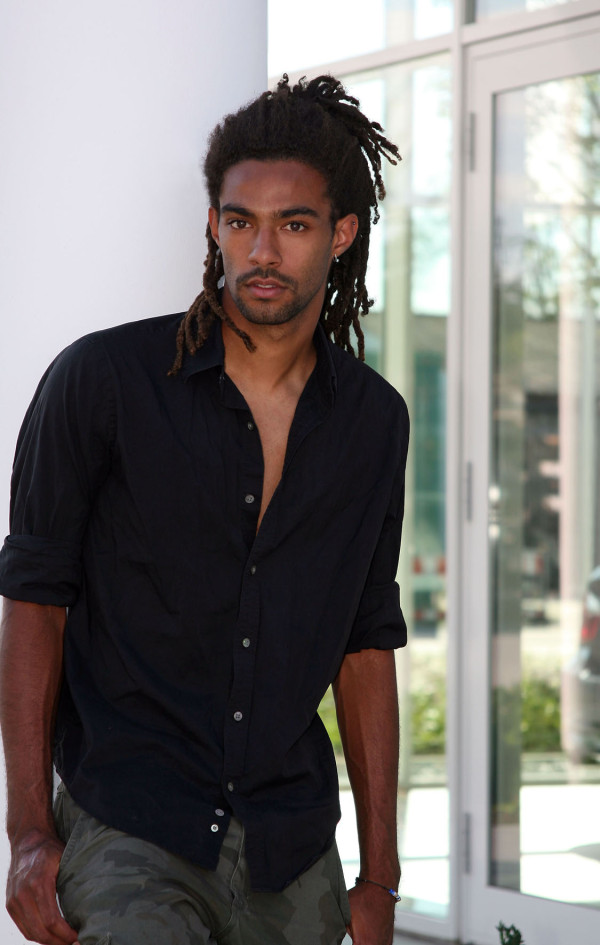 Born to a Jamaican father and German mother, Brown was raised in Germany until age 11 when his family moved to the Jamaican city of Montego Bay so he could buckle down and focus on his tennis.

“Things were just so different. Coming from Germany, having a Game Boy, cable TV and stuff and going to Jamaica and having to realise, ‘Shit, there are other things in the world that are important.’ I’m very thankful that happened. Maybe without going there I wouldn’t be where I am right now. It was good for me to see another side of life, to realise that it wasn’t all Germany.”

5. He used to travel the tournament circuit in a VW camper to cut costs.

Brown’s parents couldn’t afford the high cost of room and board on the European competition circuit, so they took out a loan to buy him a VW camper.

“It was a brilliant idea by my parents, otherwise I wouldn’t have been able to go on playing. It was a means of competing week in week out.” For the next five years, Brown lived the life of a tennis nomad, pitching up in a new town each week, cooking pasta for himself in the evenings, hopefully winning enough prize money at each event to allow him to pay for the fuel to take him on to the next one.

How does he look back on that period now? “Of course, it was far from the ideal existence of a professional tennis player. It was a tough life but it was also a lot of fun.” Brown found innovative ways to supplement his income. “I had my own stringing machine, and I’d stay up at night stringing rackets for other players. Tournament costs for stringing were maybe €10 a shot then, and I did them for €5. No one had much money, so everyone would come to me.” Other players, he says, occasionally availed themselves of his van’s spare beds. “Once in a while other guys didn’t want to pay hotel costs so they’d stay with me and give me some money on the side.”

6. He wasn’t getting enough support from the Jamaican Tennis Federation and began playing for Germany in 2010. 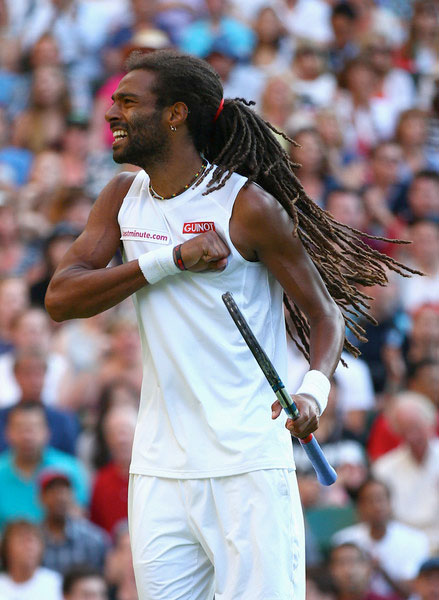 In a country where track and field, cricket and soccer are king, Brown had a hard time getting the necessary support, resources and funding for his tennis career. So he began officially playing for Germany in 2010.

“Tennis, he says, is incredibly low down the pecking order in Jamaica. Even though he was by now the island’s most successful player of all time, his results weren’t even reported by the local papers.”

What an incredible story! You can follow Dustin @dreddytennis.

Ladies, have you been following Wimbledon? What do you think of Dustin Brown?

Don’t matter to me if he’s an island boy or not. Does he have his mind right?

How do you mean?

is he anti-black woman.

Wow! That just came straight out of nowhere! Why would you even make a statement like that and put that out in the world?!

lol. open your eyes. it wasn’t out of nowhere. i could be wrong, but i think i understood where the poster was coming from with that question.

His girlfriend is White (I would have been shocked if she was Black or mixed with Black).

me too – all of the black or biracial european players are with white women/nonblack women – monfils and tsonga, included.

Yes, I would have been shocked also

SO WHAT IF HIS GIRLFRIEND IS WHITE???? like seriously people make me sick. why does he have to be with a black woman by force to make you feel good about yourself? anybody can be with whoever they want .that doesn’t always mean the person hates themselves or any part of themselves. he is as much black as he is white. heck he could even date an asian woman who cares.

oh crap, he has a girlfriend, 🙁

Are you the same poster? I’m not saying this to be rude or mean, but you might be spending too much time on certain sites. When you come into a discussion about hair and sports and want to put it on a tangent like that… I’m just saying…

you said very little, but whatever. i don’t think i was off based.

yum yum. I want to sop him up with a biscuit. lol

Because it’s an actual thing, just being anti-black. Don’t be afraid to address it. Should we not talk about bettering ourselves? Or just throw it under the rug and continue to deal with the abuse…?

I don’t think I’m suggesting that being ‘anti-black’ shouldn’t be discussed. I’m just wondering why on earth it would be brought up in an article highlighting an emerging black talent in the world of tennis. I am also saying why go into any interaction with that as the subtext unless you’ve explicitly been given some sort of indication that is might be an issue? It seems overly negative and not productive in anyway. Your comment makes it sounds like there has been some specific abuse being thrown under the rug. Has Dustin Brown done something to warrant the response you… Read more »

Hey, his story was published by local papers the moment his victory occurred. That’s how I saw the story. Please update.

He’s adorable, he must have been a super cute kid. Nice locs too. He seems a lot leaner in build than your typical tennis pros. All the best to him though. I hope he goes far.