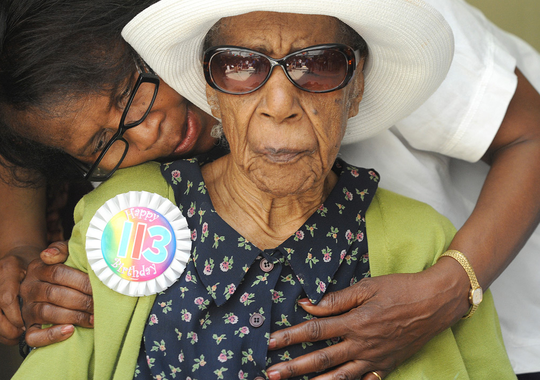 They say black don’t crack… but this right here!

Susannah Mushatt Jones is the oldest person in the world! The 116-year-old was born in 1899 and picked crops with her family in Alabama before moving to New Jersey and then New York.

Jones was born in a small farm town near Montgomery, Ala., on July 6, 1899. She was one of 11 siblings and attended a special school for young black girls. When she graduated from high school in 1922, Jones worked full time helping family members pick crops. She left after a year to begin working as a nanny, heading north to New Jersey and eventually making her way to New York.

“She adored kids,” Jones’ niece, Lois Judge, told the Daily Record of her aunt, though Jones never had children of her own and was married for only a few years.

After she moved to New York, Jones worked with a group of her fellow high school graduates to start a scholarship fund for young African-American women to go to college. She was active in her public housing building’s tenant patrol until she was 106.

Jones is blind because of glaucoma and also hard of hearing. However, she visits a doctor only once every four months and takes medication for high blood pressure and a multivitamin every day. Aside from that, she has had a clean bill of health for years, Judge said.

Jones, who wears a yellow turban on her head and a nightgown most days, spends her time in a public housing facility for seniors in Brooklyn, N.Y., where she has lived for more than three decades.

So what’s her secret? According to Jones, lots of sleep!

Jones credits her longevity to “lots of sleep,” Guinness said. But her family members say she has lived a long life due to her love of family and generosity to others.

And she also eats bacon every day! We’re hoping this means that bacon has incredible health benefits that haven’t been discovered yet…

Jones keeps a steady diet of bacon, eggs and grits for breakfast. A sign in her kitchen reads: “Bacon makes everything better.”

black don’t crack! some people from other nationalities look the same at 80 years old!

You are being nice. They are slapping on the wrinkle cream at 40.

I think some people are just predisposed to live longer. I bet she has seen so much!

Oh that is truly amazing! She looks great!!

She lived in 3 centuries!