Tatyana Ali Speaks Honestly About Her Heritage: ‘There are Skin and Hair Prejudices in Caribbean and Indian Culture’ 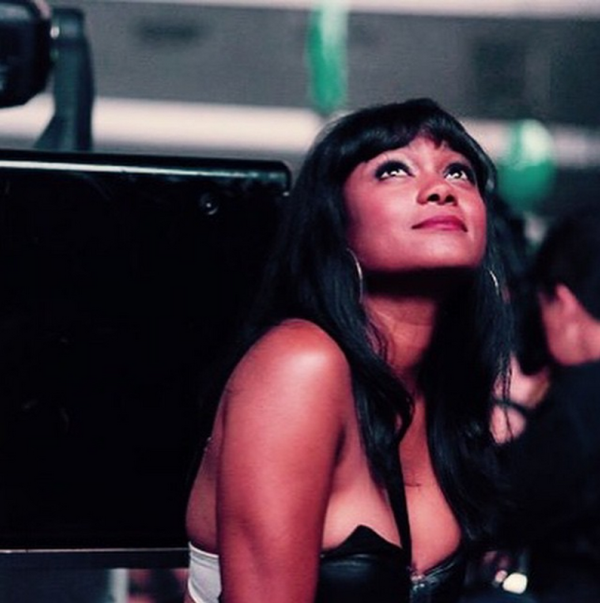 A few months back Caymanian actress and Empire star Grace Gealey expressed surprise at the light skin vs dark skin dynamic in the United States, saying that she hadn’t encountered it prior to moving here. Many folks understood where she was coming from, but others felt she was presenting skin biases as a uniquely American thing. But in a recent interview with Yahoo, actress Tatyana Ali, whose mother is Afro-Panamanian and father is Indo-Trinidadian, spoke honestly about some of the challenges she faced defining her own beauty.

I was forced to create my own standard for beauty, because I wasn’t exactly the same as any one side of my family. Growing up in a mostly white community in Long Island made things difficult as well. To be truthful, there are a lot of prejudices in the Caribbean and in Indian communities about hair type and skin color. So, I heard the good, the bad and the ugly and had to decide that I didn’t believe any of it.

Tatyana’s honest admission shines a light on the reality that colorism is a near-universal phenomenon, although it manifests differently in various cultures. Our own writers have spoken of their experiences with light skin privilege and dark skin prejudice in Caribbean, African, European and African American culture.

I’m glad that she spoke on the fact that color-ism is every where it’s not just in the black community. I think that to judge someone on hair texture and skin color and tone is just stupid. You are robbing yourself from knowing a possibly amazing person because of that.

you mean “African American” community. She’s admitting its in “other” black communities.

While colourism is not unique to the US, I can confidently say that it is more prevalent in the states/ outside of the caribbean. Countries like Trinidad, who have a large amount east Indians living there have a cast system so colourism is expected. IDK why we’re fighting and arguing about the shade and tone of beautiful black skin. In Jamaica, colourism is basically apart of our culture but it isn’t so blatant like in the US. It’s more hush hush here. In the US, they make you feel like an alien. Also i’ve never experienced racism in my life,… Read more »

Coloirsm wasn’t as bad during segregation or even during the Black love/power period of the 70’s/90’s. Though it was still present. I don’t get why y’all like to make these comparisons and you know these things

Even with the black majority. We west indians still had the good hair/bad hair bias and lighter skinned people were more likely to have better jobs and receive preferential treatment. Everywhere Europeans went, they left behind the legacy of the supposed ideal of pale skin and straight hair. Whether it was India, the west Indies or Africa.

You may think you have not experienced racism in Jamaica but take a long hard look at your politics. The systems in the Caribbean were largely put in place by Racist Europe during slavery and mostly exists today. The education system is modelled on the same system in Europe whether you’re talking Britain, France or Spain which means the system was never meant to cater for those of African descent. Everything you see in the Caribbean today is and was always for the benefit of Europeans. If there is colourism in any part of the world it is because Europeans… Read more »

I disagree about your first statement.

I agree with you..same in Puerto Rico. Greetings from a fellow Caribbean

Since when they appeared whites there is been the decline of human civilization! There was a time that there was no fighting in the skin color, the ancient people didn’t call each other whites and blacks, but with the name of the land where they were born! For this reason the whites were not the ancient Romans, because the Romans knew that in Africa there were people with dark skin but they didn’t call them with offensive terms! The whites were not the ancient Egyptians because the majority of the Egyptian kings and queens were blacks! So who are the whites?… Read more »

If you can’t be bothered to read a few paragraphs, then you don’t deserve the knowledge. Someone poured their heart out and here you come with dismissive sarcasam and laziness. Do better.

🙂 Yea, I know I’m long winded. I’m still working on that. I just allowed my thoughts to pour through my fingers as I typed. Journal like entry. My apologies. I was basically saying that growing up, I did not really “fit in” to any one category either, not based on my own doing but that of others. So I had to create my own standard as well. And not once did I take any of it personal or allowed it create some type of complex as it has for a lot of people I know. Because the kids that… Read more »

Thanks for reading my long winded post 🙂 I have the habit of using awesome sites like these as if they were my journal entries ha…Yea I totally understand you. But I think depending on where you are things are changing for the better as far as hair is concern. Slowly but surely. Where I am its becoming the norm to see women embracing their natural hair as is and I’ve waited so patiently for this day. Still not fully their yet thought… I use to tell my mom that I wished it was normal to see all shades of… Read more »

I am a mixed male from Trinidad. My mother is 1/2 white and Father’s heritage is originally from India with some Scottish mixed in as well. My skin is dark and hair is loose curly. I was born in Trinidad and later moved to NY with my parents and siblings when we were still little around 7 yrs old. I still visit Trinidad and no one there talks about race and being different so I have no idea what Tatyana Ali is talking about. I never experienced any racism at all, at least not to my face. The only time… Read more »

Really Grace Gealey .… In my experience, west indians are as concerned .… perhaps even more concerned with hair length and skin color as americans.
And (I was told this by many west indian friends) they incourage inter-racial relationships ESPECIALLY with caucasions.

That’s true to some extent but I think it may also depend on where in the Caribbean you live, perhaps even where in the island you live. Growing up, I never felt prejudiced against in any way. I only became aware of “race” by watching American TV shows. That, more than anything, brought to light just how differently people are treated in countries where everyone isn’t “brown”. I grew up with Indian friends, light-skinned/mixed friends, Afro friends, everything. It was what we call a “melting pot”, so again it was just the norm for me. I didn’t think the lighter… Read more »

I can totally relate. I too had to create my own standard. I was confused for a while but such is life. Within the East Indian community my hair was considered nappy and unattractive. Within the white and asian community my hair was strange, untamed, big, too bushy, and very much like an attraction. In the islands where I spent all of my childhood, my hair was considered normal for the most part because many people are mixed with all sorts of ethnic backgrounds. But there were times when people would say things like “cooly burnt rice.” I am dark… Read more »

Anyone who got through all of that care to summarise?

i still find myself trying to downplay my hair texture because of other people’s ignorance. anything to not stand out as much, because so many women stare at hair and don’t notice anything else for a while. not because i don’t groom it, but simply because of the texture/curl size. i get tired of talking about my hair or it being the focal point. didn’t think other women knew what that was like. in my case, i’m a regular shade of brown- straight up in the middle, with red undertones. but i am thankful that i grew up shielded from… Read more »

wasn’t she in Light Girls doc?

Are we not bored of this?

In the Caribbean our grandparents were raised to believe that lighter was better or prettier even if most where nor even white, times are changing and so is the beauty standard on these Islands. There is a difference between the U.S. and the Caribbean when you talk about race… The Caribbean does not treat Afro Caribbean/Afro Antillean as a minority or as different race.. while the U.S. does. Does not mean there isn’t any racism, there is, is more complicated to isolate a Puerto Rican by race for example because to Americans see a light skin Puerto Rican and think… Read more »