Set it and Forget it? Woman Leaves Weave in for Almost 2 Years 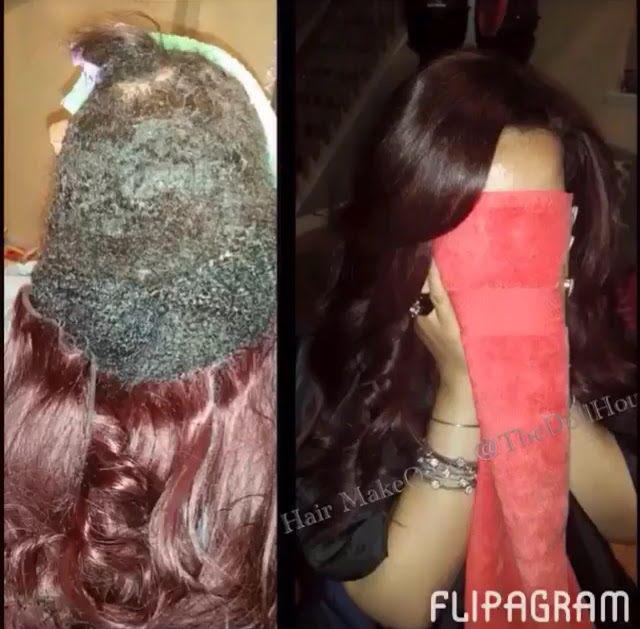 It’s well after midnight, and I’m trying to figure out how to even start this article. I truly don’t know where to begin with this one. It’s not out of disrespect — I just truly don’t know how to start off an article about a woman who left a weave in her hair for nearly two years.

No typos there — her weave was installed in September 2013 and removed in June 2015.

I was scrolling on Facebook one night, and came across this post shared by Ty Alexander (Gorgeous in Grey): 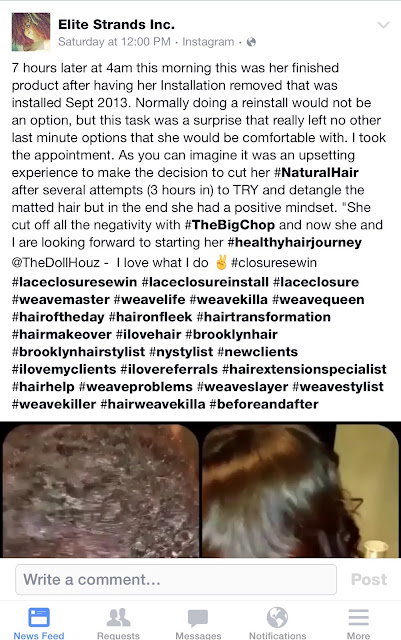 Elite Strands, a private salon in Brooklyn shared photos and video across Facebook and Instagram of their client who received a total transformation after her nearly two year old weave was successfully removed. According to the post, the braided portion was once her weave foundation. As it grew out, new tracks were glued on to close up the top. After three hours of attempted detangling, the client agreed to get rid of the dead weight and negativity, and allowed the stylist to “big chop” her hair. 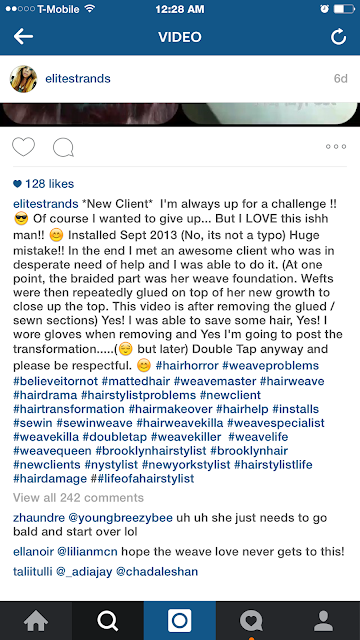 Immediately following, another weave was installed into the client’s hair, completing her transformation.

Many of us probably want to write this off as gross, negligent, and down right nasty, but something about this doesn’t strike me as merely being too lazy to do a proper takedown in a timely fashion. This is way more than protective styling gone wrong. That’s nearly two years of matted, tangled, dirty, glued up hair masked by quick fix tracks. 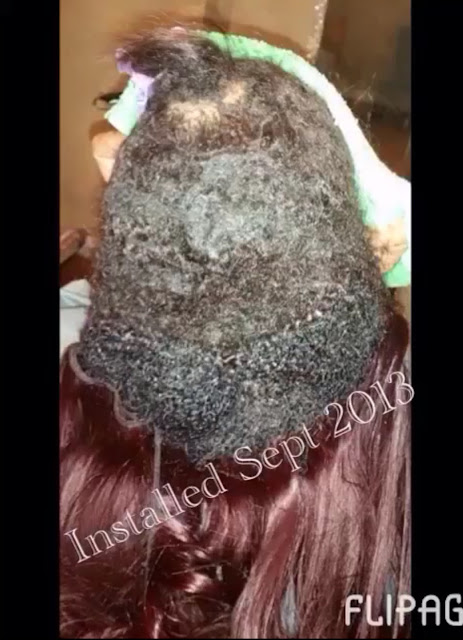 Something in me believes this extreme case leans more closely to being that of a mental health issue. A chronic neglect of personal hygiene is often considered a sign of depression. Far be it from me to diagnose someone through social media, but I cannot with a clear conscience believe this woman is just dirty or nasty.

Whatever her specific case may be/have been, I am just glad that Elite Strands was able to meet her needs, and set her on the path to feeling good about herself.

Born, raised, and living in Los Angeles, Christina is BGLH's resident transitioning expert and product junkie. In addition to loving all things hair, she is a fitness novice and advocate of wearing sandals year-round. For more information on transitioning, natural hair, and her own hair journey, visit maneobjective.com. Or, if you like pictures follow Christina on Instagram @maneobjective.

Had to be a mental health issue.

Or self hate…unless you call that mental health issues.

I vote for self hate.

Self hate is a mental health issue really..

Probably a mixture of depression and serious self loathing. I’ve been there.

Wow! I’m speechless. There are just no words to describe this.

Mental health issue or not, who was gluing in the tracks and sewing in the wefts? Who would do that to a person? At the end of the day, do we really hate ourselves that much? Unbelievable.

My thoughts exactly. I don’t know this woman, but I’m assuming she didn’t glue in the coverup tracks herself. If another “stylist” did it for her, then someone needs to find a new career and stop messing up people’s heads.

what am I looking at.

Wait what?
…I can’t even leave twists in my hair for more than a week…

The longest I can leave my hair in one style is 3 weeks. 4 week tops depending on the style. But by the 3rd week, I’m ready to get it out of my head and I mean if I had to get up at 2 am in the morning to take it out, I’m gonna (I actually did). But how is it possible for her to keep in her sew in for almost two years!

Unbeweavable! Seriously. I’d definitely believe that this is not about hygiene and I’m glad she went for help with her hair but now she’s going to need more help

If I was the stylist I wouldn’t have even posted this. It’s like she’s trying not to make the lady look bad but she makes her look worse by trying to tip toe around and be all pc. Telling us she had to wear gloves, saying “it was upsetting to make the difficult decision to cut her hair.” I’m sorry but if she hasn’t detangled your hair in two years then WTF did the woman expect. So imo opinion she’s saying the woman isn’t too bright. And if she had a “positive mindset” she wouldn’t have left weave in her… Read more »

Wait, whaaat???!!! Honey, do you hate your own God given hair so much that you are willing to look absolutely crazy for almost two years? Wow, self hate is so real. I think the stylist should have refused another sew in because its obvious she has a problem. Maybe a wig or just cut it all off and come back for some conditioning treatments and healthy hair care lessons, but definitely not another sew in or any other type of weave. That’s just a recipe for disaster. I hope she learned from this. Smh

JS
Reply to  Can't believe it

What I don’t really understand is why keep in the SAME WEAVE in for almost two years, why not take it out and get new weave to reinstall. Ugg, and I mean she hadn’t wash her hair for almost two years? And she is getting another sew-in so soon? She obviously doesn’t want any hair or any edges.

I know this girl who had in braids for over three years now, and is still going, I’m so serious. It had started to look like locs, the last time I saw her which was two days ago she had in the same braids. She told me she had decided to locs (but she wasn’t three years ago).

This is so wild. I can’t imagine leaving a weave in for even a month let alone two years. I feel bad for her to be honest.

LMAOO my girl turned into some kinda bobo dread by trying to hold on to her weave… All she needed was some fabric softner, tail comb and patience.

That’s ratchet and lazy and even though the stylist felt like she was doing something good she should have been told her about herself.

I did something similar but purposefully and successfully to start my locs. I left my kinky twists in for 1 year and yes, it took around 5 hours to remove them but afterwards I had my hair dreadlocked like I wanted without the transition stage and with almost no hair damage. I’m now 7 years into having my hair loced, with no added hair after the first year and they are thick healthy and lower back length now. Granted I was diligent in washing, rolling and making sure they stayed clean and relatively manicured during the year and afterwards.

Putain de bordel!!!
So gross!!
It may be depression but it’s too easy to blame the mental disease. When you see how chemical and hair killer some of our practice can be, this woman is just an exemple of the longing for straight hair in our community.
Trust me, the non natural hair don’t get the importance of detangle the hair as we do. That’s why some of us in BGWLH, claim it’s a disease. But it’s just a black girl wanting straight hair. That case doesn’t surprise me.

Part of this tragedy might have to do with our old fashioned unhealthy fixation on the appearance of length and straightness by any means necessary. Perhaps the client thought her real hair could actually be saved when the weave was finally removed. Who knows? But whenever I see a long straight weave on a naturally curly girl, I think there are self esteem issues involved. Just like I would if a straight haired girl tried to pass off an afro weave as her own (are you listening Rachel Dolezal?). Relaxers also need to go. Sadly, this barbaric practice it’s still… Read more »

Truth be told she had to be in a coma.
It had to smell

Now my questions is
The second picture to the right above the new weave she put in after the big chop? Cause it don’t look like a 2 year old weave job.

A black women wearing a weave that don’t match their own hair texture for 2 years straight? I think this is self hate and i feel sorry for her and other black women who do this to themselves.

That’s messed up…I once knew a girl who kept her same tracks in for nearly as long. I really don’t get it.

What a disgusting story.

Awww! So sad.…I have seen similar with braids too. Leaving them in for close to a year, way too long. Sad.

Whoa… this is… I’ve heard of Black women leaving in weaves for long periods of time but I’ve never heard of one being left in for two years. This, to me, does sound like a very extreme case and I don’t believe it can be summed up by her simply being negligent.

Regardless of her feelings it’s so irresponsible of the stylists who kept glueing more weave on top. If they had any kind of ethical standards they wouldn’t have done it. I guess greed always wins in the end.

atleast what she still has an amazing amount of length left from looking at the pictures, and after two years, im pretty sure the ends probably could of used a cut anyway… i dont understand how you can wear one style for two years, that’s impossible for me…and the color in the photo at that

Two years how? Why? Huh?