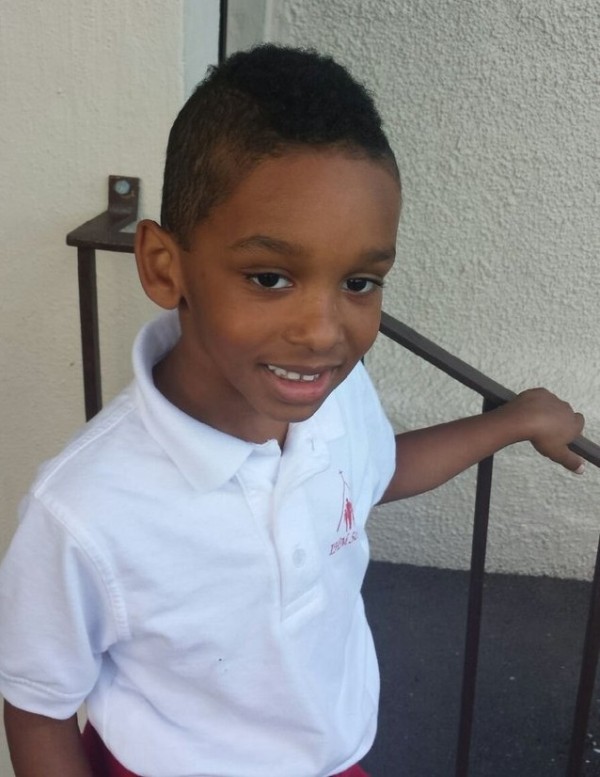 What do you see when you look at this picture? To many this is a neatly groomed black boy ready for school. But to the Immaculate Heart of Mary school in Belmont, California this hair style was “distracting” and resulted in little Jalyn Broussard being sent home half an hour after he arrived at school because according to Principal Teri Grosey, the style would “unduly influence the student body.”

A little background here, Immaculate Heart of Mary is a Catholic school with a strict grooming standard that bans faux hawks. However, Jalyn’s mother Mariana Broussard notes that the hair cut is closer to a fade than a faux hawk — the longest parts are less than a half inch off his head — and she has seen White and Asian students sporting the same style.

Jalyn was sent home in December, and Mariana has tried unsuccessfully to see eye to eye with the school since then. After months of unproductive talks, she pulled her two children out of the school and filed a discrimination suit with the U.S. Department of Education’s Office for Civil Rights.

As the mother of a 2 (nearly 3) year old who attends preschool, and a former Catholic school student (shout out to Immaculate Conception Prep and High School in Kingston!) I am trying very hard to see the school’s point of view, but honestly I can’t. As one individual noted in a comment underneath the original story, Jalyn’s style passes military standards and yet it got him kicked out of kindergarten… (Cue Meek Mill’s Where Dey Do Dat?) But seriously, it’s hard not to feel that there are some insidious factors at play here — the criminalization of black children’s behavior, the ‘othering’ of black hair and the characterization of black style as negatively influential.

So, the school is located in Belmont. That pretty much sums it up.

That’s definitely not a Mohawk. Glad she sued and I hope she wins. His hair is not distracting. Those people are nuts at that school. She was right to remove her kids.

This Catholic school is unapologetically racist. Since they can’t say “negroes aren’t welcome”, they’re claiming that it’s just the hair that naturally sprouts out of our scalps that’s the problem. The only thing worse than a bigot is the two-faced coward variety. I like to know where I stand with folks.

That’s not true. My cousin went to a catholic school and she wasn’t treated like that at all. Not all catholic schools are the same. I think parents should ask about hair issues before they enroll their child because if the school doesn’t allow a certain hairstyle then you know to find some other alternative.

Did your cousin go to “THIS Catholiic school”???? I wasn’t talking about your cousin’s school, just this one. Geez.

A parent shouldn’t have to ask a school how to style their kid’s hair. Is the school going to be doing it or paying it for them? If it were unusually coloured or an asymmetric style that is a bit unnecessary but he has a normal looking reasonably smart style and if other kids have had the same style it is definitely discrimination.

This is a great contrast to the previous article of Congolese school girls. There is such a narrow acceptability range for black hair that the essential message reads: assimilate. Perm it, Dutch braid it, shave it, look like us or else. It’s sad. There is no standard based on the styles or texture of our hair and what it needs. Such a shame to disrupt a child’s education over this.

Without more information regarding the documented school standard, the parents argument, and steps taken by each at a resolution, I find it unreasonable to jump to the conclusion of racism.

Well this is just dumb. Your making a splash over something that is about school regulations. My dad hates that hairstyle too. He thinks it’s dumb. My friend’s son got sent home as well for that same hair do (he’s white). School hair policy is just that. conform to the rules or home school your child.

So your dad thinks the military is dumb because this looks a lot like a crew cut to me. I don’t think any hair style could be more conforming than a crew cut. Super short on the sides and a little longer on top. And the rule is against faux hawks which this is not because there is not enough difference in the length of the top and sides. So they were following the rules. The problem is when rules are arbitrary or not equally enforced it creates confusion. The mom said other kids were wearing it. I remember in… Read more »

@andrice — This story can be found in a number of places with more details that clearly show a bias toward this child. Another child with a crew cut in the same school was not reprimanded for having basically the same style (without the curls), was NOT thought to have a “distracting” hairstyle. That alone speaks volumes.

OMG it’s a Catholic School they can do what they want.

That is a fauxhawk. It’s a short fauxhawk, but it’s still clearly a fauxhawk. She knew this was against the rules. A crew cut has a wider top. That’s 4‑inch strip across the top of his head she tried to pass off as a fade. Let’s not cry wolf.

For me to call this a fauxhawk I think the longer hair in the top would have to extend past the top of his head to the back. Granted it’s difficult to tell for sure but it looks to me like his hair is just as short in the back like it is on the sides. It reminds me of what guys wore in the 90s only shorter at the top. I did some research and there is a style called a fauxhawk fade so maybe both sides are right and wrong. The courts will decide. Anyhow I don’t see… Read more »

I agree with you. It is a fauxhawk and looks quite cool and would definitely be distracting in a sea of more conventional hair cuts.

That all sounds very technical, and pretty petty to get a kid in trouble.

My son went to Catholic school for 8 years and I always just cut him the lowest bald fade possible to ensure we had no such issues. Now that he is a college sophomore, he wears a ridiculous hawk (and looks much younger than some of his high school pics). I don’t care as much and I let him enjoy it, although he knows it comes down when he finishes college and has to enter the professional environment (yes, he listens to me still). It is a rule in Catholic schools; the kids are not supposed to wear any hair… Read more »

Wow, the main issue I’m seeing here is that Asian and White boys were seen with the same/similar style but nothing was done to them. Btw! I currently attend ICHS in Kingston. Hands down best High School in the island^.^

My son goes to a Christian school and they absolutely don’t tolerate different hair styles from either the girls or the boys and this school is black owned. They state they are getting our kids ready for the real world and that there is a time and a place for everything and I totally agree!

ICPS & ICHS Represent! 🙂 This story breaks my heart…and yet I have friends who try to tell me what we hold on to these kinds of things too much…unfortunately racism is alive and well

This mother is in the wrong. The boy’s haircut is against the rules of the school.