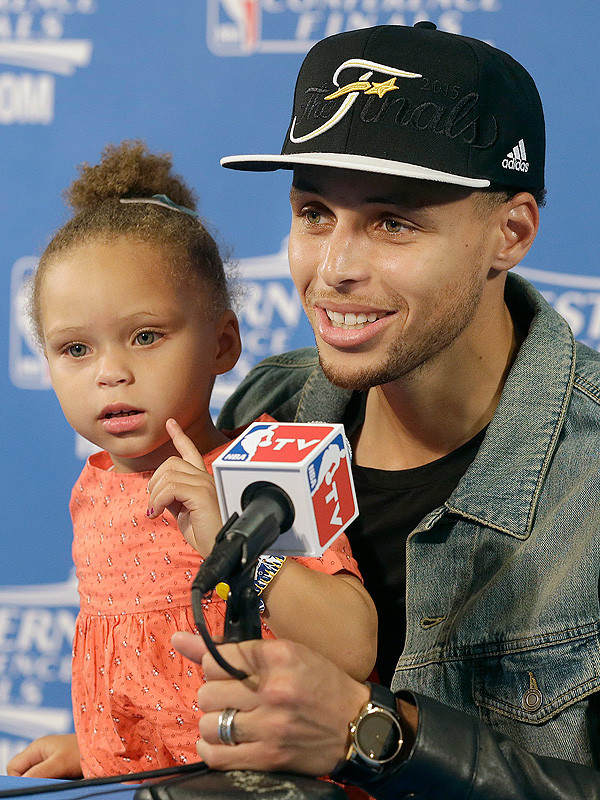 Riley Curry, daughter of Golden State Warriors player Stephen Curry is definitely a star in her own right. The 2‑year-old took front and center with her dad during a couple of post game press conferences after their wins. Instead of sitting still the adorable toddler really explored the space, playing with the microphone, hiding behind the curtain and being generally cute. At one point, when she finally gets her chance on the mic, she simply utters:

Peep her in action in the videos below.

This is too cute!

Some sports commentators and internet commenters have called her actions inappropriate and insinuated that Steph Curry has no control over his daughter. To which I, mother of a 2 year old and 5 month old infant, ask have you *seen* a toddler before?! The words ‘toddler’ and ‘control’ don’t really go together.

I showed my 2‑year-old son this vine of Riley Curry’s curtain antics and the boy laughed for 5 minutes straight. Clearly he wanted to get in on it…

Riley Curry knows how to make an entrance. https://t.co/LLP78ngrrw

Have you been keeping up with the playoffs? Are you rooting for the Golden State Warriors or Cleveland Cavaliers?

Did anyone see the pic of the little white girl who had a full on tantrum at the white house? On the floor in front of the prez. That was bad, but she was white, soooo…