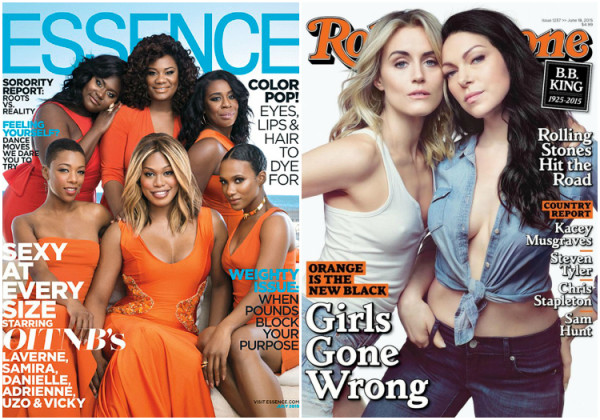 June is an exciting time for fans of the Netflix series Orange is the New Black, and with excitement building for the show’s June 12 premiere, the cast is hot on the press trail. Magazine interviews and covers are all a part of the game. But the separation of the cast by race on two magazine covers has a few fans scratching their heads. To date (and please correct us if we’re wrong) there hasn’t been one magazine cover featuring the diverse cast in its entirety.

On one hand, we know Essence is a magazine that caters to an audience of primarily black women. Rolling Stone, however typically has a wider audience but seems to cater its content to white males ages 18–34. Now to be fair, cast member Dascha Polanco is featured on the June cover of Latina magazine. 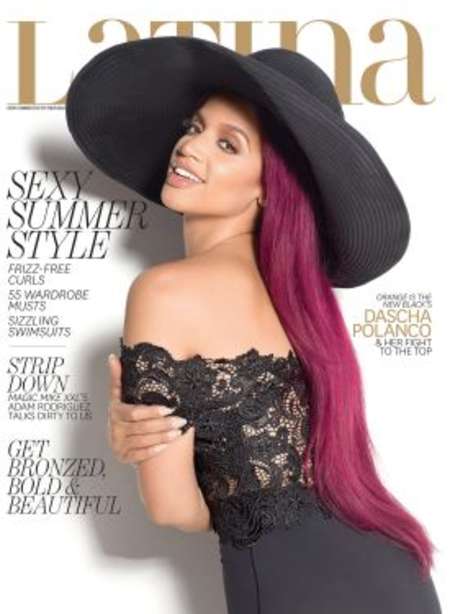 This is interesting because a focal theme of OINTB is how the prisoners divide themselves up by race, and operate within those segregated subcultures. So this is a case of life imitating art (which was imitating real prison life…)

Are the separate magazine covers concerning to you? Why or why not?

Just curious whose cover came out first? If the rolling Stone did and left the black cast off,then I see the essence cover being a response to that snub.

No, these separate magazine covers are not concerning to me. The Rolling Stone cover features the two main characters of the show. The show is basically centered around their relationship. I could understand people being concerned if the Rolling Stone cover featured EVERY SINGLE white female that has a role on the show and left out the black women, but that’s not the case. And the target audience for Essence is black females, so their cover highlights the talented African American actresses from the show. I think deeming this as racially discriminatory is a bit of a stretch…

I’m ok with this. There are a lot more white women on that show that aren’t on the Rolling Stones cover. Move along…nothing to see here…

White magazines are going to feature whites. Why is this hard to grasp? Non ‑blacks people are not going to displace themselves to be “diverse”. They target their own unless featuring us makes makes them money. Once we get the memo then we can practice the same exclusivity without having to care about anyone complaining about our lack of diversity. *shrugs* And Im sorry. Im not feeling the man in a dress at the forefront of a women’s photoshoot. Black women are already marginalized with the use of non-black/quasi-black women. Now we need to potentially worry about men in dresses?… Read more »

Everything you said!
Yes, yes and YESSSS!

Such a dumb and ignorant comment. Everyone’s praising how much Bruce Jenner was brave to put himself out there and tell his story… But a black man… no, we’re not feeling it… Tolerance can’t happen only when you need it, either accept everyone, or no one… Black, White, Asian, Gay, Transgender… We all deserve people to shut the F up and live our lives the way we want to! So please do me a favor and do just that!

Where the hell was I praising Bruce Jenner?! Your lack of comprehension shows how dumb you are. So let me clarify a few things: I don’t endorse nor give two shits about the dysfunctional behavior of other groups. Why? Because no one reciprocates when it comes to black issues. Just because others do it doesn’t mean blacks have too (basic pre-school lesson for you). A man in a dress can view himself as whatever he wants. I reserve my right to still consider him a man. So with all due disrespect learn the art of comprehension, not making as ass of… Read more »

Laverne is a woman, transgendered or not. What a shame, you had a point until you went there.

I’m confused, I don’t see any men on any of the covers.… what are you talking about?

A transgendered woman is still biologically a man. This is a fact.

Doesn’t matter, she’s living as a woman, identifies as one, lives like one, and in her mind and heart is one. I’m pretty sure most men would say they have nothing in common with laverne.

And? I identify myself as 7’4. Does that make it true? No. If Laverne has some things in common with women that fine…but he’s still a male.

this got me rolling tho!

I guess they wanted to keep the theme going off the show, lol. I don’t have a problem with the RS cover ’cause Essence and Ebony has done covers of actors from diverse cast’s, but only included the black actors–Think like a man 2 is one example. To me I see beauty when we can all highlight ourselves ethnically and cater to each specific group. That’s not an issue for me, the issue arise when non-white ethnic actors don’t get a chance to shine at all, or shunned altogether from all mainstream magazines. I like all three of the covers,… Read more »

Well the only one I’m side eye-ing is rolling stones because rolling stones is supposed to be for everyone, but I don’t see anything wrong with Essence and Latina because they are just showing off the actresses of there ethnicity (a little hypercritical I know). It wouldn’t make since for them to have the white girls in Latina or Essence, but it would have been nice if they included the whole cast, but I know that they are appealing to the demographic. So It doesn’t hurt my feelings at all, I’m not going to stop watching the show or whatever.… Read more »