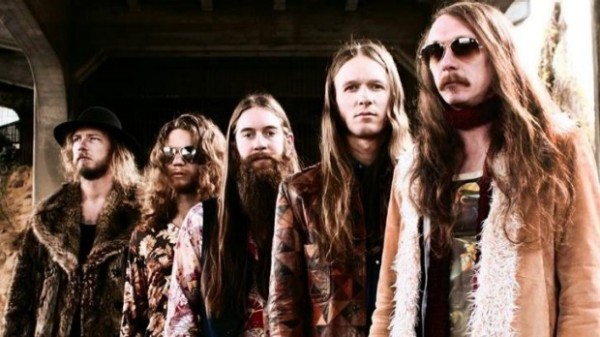 Right about now, there’s a petition going around to stop this wannabe Stillwater-looking band (tired, Almost Famous reference, but whatever) that decided it would be real cool to name themselves “Black Pussy” from playing at venues across the U.S.

So far, their shows in Raleigh, North Carolina and Winnipeg, Canada have been cancelled.

The lead singer of the Portland, Oregon band, 41-year-old, Dustin Hill claims his naming choice was “sexy” and “70s.”

Hill further claims that he didn’t consider the fact that someone would take offense to the name in an interview because, he’s so different:

“I sit in a very isolated spot compared to [the rest of] humanity,” he says. “Words do not offend me.”

If you take a look at the band’s Facebook page, it’s filled with all sorts of gems: 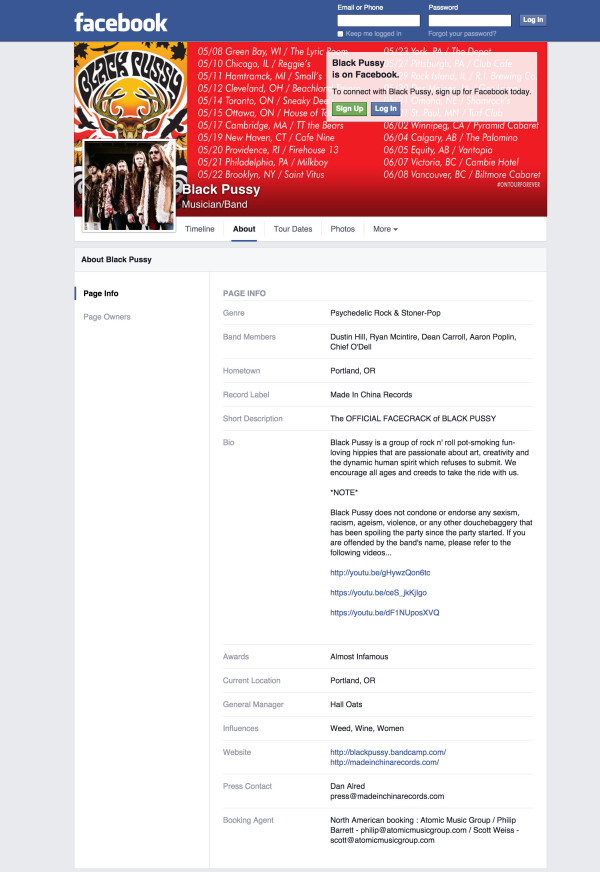 Black Pussy does not condone or endorse any sexism, racism, ageism, violence, or any other douchebaggery that has been spoiling the party since the party started. If you are offended by the band’s name, please refer to the following videos…

Don’t you just love when outwardly offensive individuals proclaim how non-racist/sexist they are by directing your valid anger to 3 YouTube links of white comedians shaming you for being offended? How does that work? How Sway?

Oh and if you thought that no one told this Hill to change the band name, they did. However, Hill simply is just too “committed” to it.

“I’m not going to change the name because I’m afraid it’ll hurt my project. I’ve committed to it, because that’s what artists do: They commit to an idea. It’s not about trying to be successful or trying to make money, it’s about the idea. We build on the idea, and if it fails, it fails. But I’m not going to change it because a tiny percentage of the population has an issue with it.”

He’s a young Andy Warhol in a sea of Monet impressionist critics or something… Oh woe is me and countless other black men, women and consequently other non-black people who are offended by your “art.” Highly doubt that’s a “tiny percentage” of the population. Heck, I’d be willing to bet there are more signatures on the petition than there are album sales for this band.

Furthermore, it’s a bit of a coincidence that the band’s name is the same as the original working title of The Rolling Stone’s 1971 song, “Brown Sugar.” This too has been brought to Hill’s attention. If you’re unfamiliar, the song fetishizes slave masters raping black female slaves. Here’s a preview of the lyrics:

Literally, can’t finish reading this song without gagging profusely, but if you need to read the rest, be my guest. Can’t really figure out why Hill would think a shoutout to this song in particular would alleviate him of any offense.

By no means are Hill and Black Pussy the only offenders. There’s also another band out of Richmond, VA named “Black Girls.” Their reasoning behind the name:

“…I think this one time we were showing some stuff to some friends, and they asked if we had gotten a trio of black girls to come in and record backing vocals. So that was kind of flattering and we thought, “Hey, not a bad name either.”

Not a bad name? Try again, bros. There are tons of awful names you could pick from that don’t disrespect black female bodies.

However, since these individuals don’t give a crap about amplifying their ignorance, I find the suggestion one commenter left on the interview put it best:

Given that Dustin Hill isn’t bothered by what other people might find offensive, he could just rename the group “White Privilege.”

A little history lesson for Black Pussy from the editor:

Rape was a tool of oppression used habitually on black women even after slavery. In a NY Times article entitled Pay Tribute to the Black Women Who Spoke Out About the Sexual Violence Stanford history professor Allyson Hobbs details the sexual violence black women endured during Reconstruction;

Similar to their fathers, husbands, brothers and sons, African-American women experienced political and economic terror. But these women also endured sexual violence at the hands of white men determined to restore the sexual codes of the slavery regime. When the federal government called for congressional hearings to investigate the Ku Klux Klan in 1871, hundreds of black women came forward.

As historian Hannah Rosen has documented, Frances Thompson testified that seven white men broke into the house that she shared with Lucy Smith and demanded dinner and “some woman to sleep with.” When Thompson declared, “we were not that sort of women,” the seven men raped the two women. Harriet Armour testified that two white men raped her because they were angry that her husband had been a Union soldier. Rebecca Ann Bloom stated that an intruder got into bed with her, and “violated [her] person” at knifepoint. These were not the actions of “a few bad men,” but rather were systematic attempts to exert control over black women’s bodies and to cancel a black woman’s chance of being regarded as chaste and respectable.

Such testimonies were limited. They were suppressed by the humiliation of speaking publicly about rape in front of disbelieving white officials and by the physical pain and the psychological wounds that these assaults left behind. It is remarkable — and it must be remembered — that during Reconstruction, hundreds of black women publicly condemned white men for sexual crimes.

Sound off! Do you think the boycott is the right approach?

At first I didn’t get the offense because I linked it to, black pussy=black cat. We all know that joke, so thought they were doing a double entendre on that. But after reading that the inspiration for their name was, the RS song Brown Sugar, now it makes sense why people are angry. Racially offensive and mysoginistic at the same time–what a twofor.

Desperate bands do desperate things, then call it “art”.

Color me not surprised. I wish the U.S. school system incorporated more critical thinking and sociology at a younger age.

Is it too much to ask for a modicum of respect?? Come on. I normally don’t go around wishing ill on people, but wish this band no success.

The original article title in the email was everything! Saw the new title…what gives?

I know, I preferred the original title too.…it was hilarious!

Sometimes, the title changes improve the article, but I’ve seen instances like this one where I preferred the original.

Oh, the hypocrisy knows no bounds. Was a similar piece written when Jeezy’s single, USDA, dropped? How about Plies’ Becky? I wouldn’t change the name of my band either. Last I heard, black pussy is the cure to what ails you 😉

Yes, because power structures and disparities aren’t a thing at all. Let’s welcome the fetishization of marginalized groups with open arms.

I glanced through your comments, and I wonder if you are actually Black. If so, please take a sociology course (you must have missed one too) and examine the definition of “self-hate.”

Where to begin…I’m never quite sure how to feel or respond when a black person (I’m assuming, dangerous, I know;) tells me I hate myself because my thought process does not align with their own. I’m usually pleased at any opportunity to express myself and my perspective but I’m always shocked by the hypocrisy. Neither skin color nor racial identification is a guarantee of solidarity and there is no singular Black Experience in this country…contrary to popular belief. As for power structures and disparities, they have always been and will always be. Will we remain beholden to them for our… Read more »

I live and was born in London and I’m offended by the arrogance and ignorance.

Now before seeing the lyrics I was going g to say ok whatever… but wtf I should create an all black Indies women group called little white dicks.….. people would riot smh

Just like RS, these crazy pseudo racist hillbillies have a hidden agenda of how they feel about black women. Unfortunately I grew up and went to school with bigoted White guys who were severely cruel and extremely ignorant when it came to any general imagery of black women.Interestingly enough I did not fit into their idio-stereotypical conscience in what they believed a black women should be . Naturally this pissed them off and scared the living daylights out of them and to conceal their own transparent fear of me they severely bullied me to no end. It’s really quite interesting… Read more »

I clicked on this fully prepared to entertain an argument that they were referencing the Stones song as some kind of social commentary–I thought I’d come away thinking this was a misguided but well-intentioned attempt to call out the exploitative BS underlying that song. But no, just pretentious racists doing pretentious racist stuff. It’s especially striking for me reading this piece today as I am currently researching my family history and discovered just yesterday that my great great great grandfather was a confederate soldier who fathered two children with my great great great grandmother, a live-in servant 24 years his… Read more »

The name is a publicity stunt to garner attention for their group. Who would forget a name like that? No one! He is depraved.

here’s a name for their group I can seriously get behind ” Us Race-baitin’ F*gs Wanna Be Raped” because that is EXACTLY what they are saying. Racist sex offenders/freaks who are loving the church murders of black folk, and are publicly wallowing in the blood—domestic terrorism masquerading as “music”—–nobody is fooled by these depraved murderers/no-talent trash„,

Would you find an album by Parliment/Funkadelic entitled “Black Pussy” offensive?

I’m not offended, but then again I am born and raised in London, England. It is so different to ya’ll

I’m not offended at all. As a artist, controversy gets attention. Which gets them the publicly they’re after. I think we’ve become too sensitive and too “politically correct”.